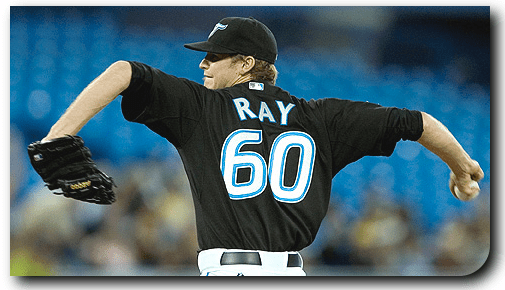 There’s not much of a point in showing Ray’s minor league stats this season. He threw only 13 IP. During his short Toronto stint he allowed less than a hit per inning, and struck out roughly twice (13) as many as he walked (6). During the season Ray’s cutter went from so-so to a legitimate plus MLB pitch. Although the sample was small, Ray’s wCT/C was 2.90, which is a very high score (runs above per 100 pitches or in this case cutters thrown)

After one September minor league appearance Ray will use the AFL to work his way back into form and to audition for a spot in the starting rotation next season. Ray will be 26 at the start of the 2010 season.

Cuban born Reidier Gonzalez (Villa Clara, Cuba) quietly had another great season in 2009, this time in AA New Hampshire. His 2.90 ERA and opponents average of .236 turned heads. My favourite stat? Only 4 HR allowed in 93 IP. For the most part Gonzalez pitches to contact and strikes out about 6 per 9 (in 2008 & 2009). I’ll be interested to see if he can keep the ball in the park in the HR friendly AFL.