After last nights destruction (I can’t think of any of word) of the Twins the Jays upped their record to 8 – 3. How does this record compare vs the AL 11ish games in last season? 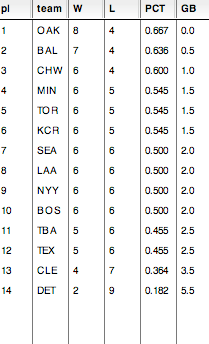 The list date is April 12th of last season, which is comparable in games played to this season, with this years games played of course being pushed back by the WBC.

Odd top half of the list. The Orioles were no real threat to anyone. At the tippy top were the Oakland A’s. The A’s were above .500 for most of the first half of 2008. And then Billy Beane went on a fire sale. I can’t see J.P. doing this for a couple of reasons. One, I don’t think he has the job security that Beane has, which means no mass fire sale leading to a 10 games under .500 record. Secondly, this team appears to be built for 2010. Thirdly the Jays have greater pitching depth at the MLB and AAA levels. The A’s basically had a AAA, even AA pitching staff in the second half of the 2008 season.

The Jays are looking good. I’m not about to uncork the champaign yet (even the Orioles are 6 – 3), although perhaps this club is better than we all originally thought.