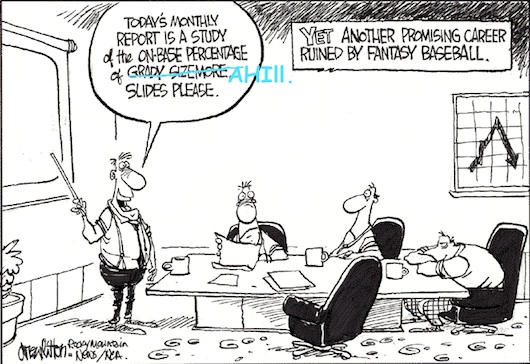 I know we’re supposed to suck and all this season but the fantasy community is giving the Toronto Blue Jays absolutely no love. Only three players rank within the top 200 (average) for standard 5×5 roto leagues. Here’s a table of the top Jays fantasy players for 2010 from four of the most well known fantasy services. The average applies only to players that ranked on all four lists

The closer situation has devalued all three of the candidates. If someone stands out in spring training I’d expect their average ranking to jump at least 50 places.

Marcum and McGowan are good value plays in the latter portions of drafts (or even on the free agent wire). I can see Marcum solidifying himself as the Jays ace and producing decent numbers across the main four categories for starters.

Lyle Overbay – If Lyle moves into the leadoff spot he should see a nice bump in runs scored.

Travis Snider – The fantasy world appears to have already written Snider off. He’s struggling against lefties but he’s still a kid. His upsidecertainly offsets his 279 average draft position.

EE – He had a hot September but I’m still not sold on EE. I don’t feel that he’s worth his average rank of 254.

It appears that Randy Ruiz can’t buy an at-bat from Cito. He’s ranked highly on the three of the four lists (with ESPN being the exception). I’d pass on Ruiz as it appears that he’ll be back-up role at best.