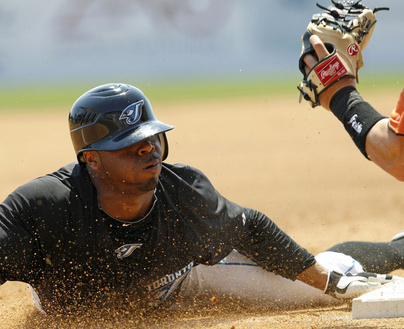 An ongoing article calculating the 2011 Toronto Blue Jays aggressiveness on the base paths.While a crude manner in which to measure steals (as it does not take into account outs, additional baserunners, occupation of second base, etc), SBA (Stolen Base Attempt Percentage) is the ‘industry standard’ in fantasy baseball circles when measuring team & individual player SB aggressiveness.

Another crude metric for speed is the Speed Score, developed by Bill James. This metric will be revisited in a June update, once sample sizes have grown.

Also on tap, base advancement.

For now, back into SBA.

(Stolen Base Attempts) / (Singles+Walks+Hit by Pitch)

Note: Some use HBP, others don’t. Since an HBP gets a runner to 1st base, it will stay in this set of data

Heading into the 2011 season, the message coming from the Jays was clear > We’re going to run.

For reference’s sake, the 2010 Jays had an SBA score of 6.03%. This means they attempted a steal roughly 6% of the time that the opportunity represented itself, using the admittedly flawed SBA equation. This placed the Jays near the bottom of the AL, 12th out of 14 teams. The 2010 AL average was 9.45%.

Moving onto the 2011 season 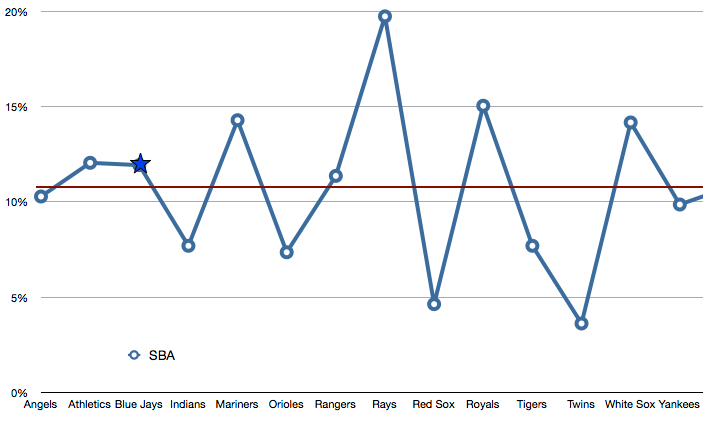 Will the Jays continue to stay above the AL average in SBA? Also, how will the team end up placing in other metrics such as Speed Score?

These stats will be revisited in early June.

In the meantime you can: