Another pitiful season of Toronto Blue Jays giveaways and promotions. Outside of opening day, the Jays are giving away only 50,000 promo units ALL season!

Identity crisis! Rally Towels? 40K+ at the RC waving towels will make a great visual for the television highlights. That has to be the angle.

The first of two Bobblehead giveaways. Although I’m disappointed with the number of Bobble giveaways this season, I do have to give the Jays promo staff credit for going all out and offering high quality representations. This Bobble features a great Jose smile and 54 on the base of the unit.

Once again, opening series vs the Twins. The front loaded aspect of this promotion must be in place drive fans to the park early in the season, hoping ‘the fever’ catches on. As with last seasons Bobblehead promotions, I wish they gave away more than 10,000 units.

Conversely, the Milwaukee Brewers are giving away a total of 6 Bobbleheads (with “all fans” listed as the per game quantity). Ontario’s own John Axford

Continuing on my off-topic rant, the Brewers are also running a promo that would be a perfect fit for a large demographic of Jays fans, Singles Night:

For only $40, get a Dew Deck ticket for the Brewers vs. Reds game on April 25 at 7:10 pm, which includes a pre-game buffet and two drinks per person, plus the opportunity to mix and mingle with Milwaukee-area singles!

Watch out for those drinks. What’s made Milwaukee famous….

Anyways, shifting back to Toronto’s promotions.

I’d imagine that this promo is for Children only. A nice little giveaway for a Thursday night tilt against the Orioles. 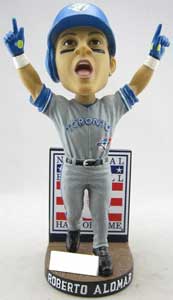 Great giveaway. There will also be a hall of fame celebration, as the Jays honour Roberto Alomar. The Rangers come to town, giving fans a chance to see Josh Hamilton.

Home Hardware sponsored t-shirt giveaway. A Sunday vs the Yankees. This is a prime example of questionable promotional schedule. Do the Jays really need any help drawing fans for a weekend game vs the Bronx Bombers? And how many of these T’s will be going to Yankees fans? This promo should be scheduled against the Royals or Tigers.

It’s back. Although I’m not sure why. Tweet to @bluejays for free crap during the game.

Essentially a sponsored tailgate with over priced food & drink.

A Toronto institution. Free outdoor activities, running the bases, etc. And this season children 14 & under are 1/2 price in the 200 Outfield & all of the 500 level. Can’t hate on Jr. Jays.

Questions: Does anything excite you? What type of promotion would you like to see in Toronto?