Yesterday the Toronto Blue Jays signed Edwin Encarnacion to a three-year, $27 million contract that also includes a $10 club option for a fourth season.

I’ll lightly touch upon WAR analysis without going too far in-depth. I’m sure you can find standard WAR breakdowns at Fan Graphs and other sites.

Cliff Notes WAR on the Transaction:

A WAR is around $4.5 million. If WAR is your thing, EE has to post roughly 6 WAR in 3 seasons to justify his contract. This season EE has 2.8 WAR and is on pace for over 5.0 WAR

If EE can maintain his success, his contract is a bargain. If he regresses I think the contract still represents a good risk vs reward.

With that out of the way, I’d rather look at some of the ‘cool stuff’ such as heat maps and varying statistics. I think some of the following examples showcase the value the Jays could potentially receive from the contract.

If you throw a strike, EE is going to make you pay.  Edwin’s slugging in the strike zone, in numerical and heat map graphics: 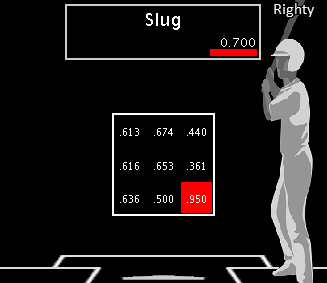 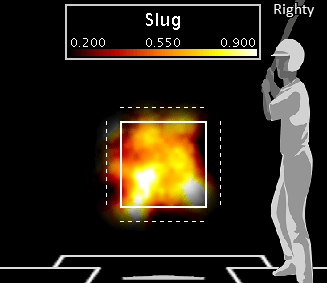 The only questionable area for Edwin is middle-inside. But if you’re a pitcher and you see a .950 slugging percentage low and in, are you willing to risk it?

And EE doesn’t chase pitches out of the zone too often: His chase percentage of 22.3% is in the upper echelon of MLB batters, ranking in the 89th percentile.

It goes without saying that EE presents a difficult match-up for pitchers. He mashes in the zone, he’s one of the games best outside of the zone — what’s the game plan for opposing pitchers?

I should preface this section with the following: Nearly every MLB hitter has trouble against one or two pitches. For example, since 2009 Jose Bautista is 3 for 47 (.064) with no extra base hits against curveballs.

Let’s start at the bottom for EE and work our way up.

EE has had trouble with two pitches — cutters and sinkers

The ‘Book’ on Edwin is to throw him sliders. His batting average against sliders is a parltry .236 mark. However, he’s slugging .455 against the pitch, including an HR rate of 6.5% per outcome.

And fastballs? Edwin is in the 95th percentile in the MLB, posting video game like numbers vs the pitch, including .451 wOBA, 1.076 OPS and crazy .332 WHAV (well-hit-average).

I like to think that the slight struggles against cutters and sinkers are more than offset by his dominance against fastballs and change-ups.

I like to think that EE is a player that:

A) Mashes in the Zone

B) Doesn’t chase too often. When he does he’s one of the games best at translating chases into positive results

C) Eats fastballs and change-ups for breakfast. Holds his own against common off-speed offerings such as curveballs and sliders

Throw in Edwin’s willingness to do what’s best for the team by switching positions and his newfound ability to intelligently steal bases and I think the Jays receive a tremendous value by locking Edwin up at $9 million a season.