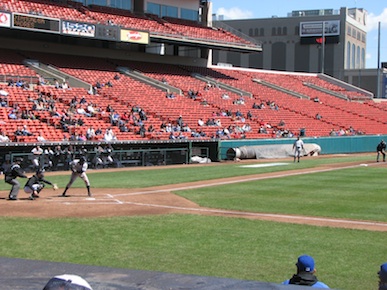 Sunday was a a beautiful day for a ballgame in Buffalo. I headed down to watch the Scranton/Wilkes-Barre Yankees take on the Buffalo Bisons (Mets) in a AAA international league showdown.

The Yanks pulled out a 4-3 win in 10 innings, thanks in part by the Bisons inability to cash in runners in scoring position multiple times with less than two outs. Bisons closer Manny Acosta was within one out of closing out the game before surrendering a long HR to Eduardo Nunez. The Yanks ended up scoring again in the 10th to take the win. Final attendance was announced at 4613 but I doubt the park had more than 2000 people in it. 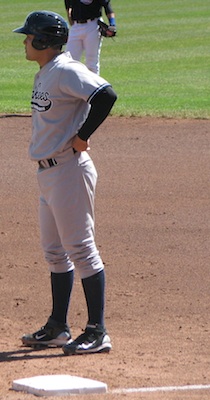 The Yankees line-up wasn’t impressive. They have multiple 24/25 year old players that are destined to remain in AAA for many a year. The one bright spot was the organizations #1 prospect, Jesus Montero.

The Bisons didn’t want to pitch to Montero on this day, and gave him two unintentional intentional walks. Montero displayed patience and didn’t chase for the entire game. This would explain his low K-rate in 2009 (47 in over 350), despite being a power hitter. If I could find a negative on Montero it would be his foot speed and his overall size. This kid is huge in person, most likely larger than his 6’4, 225lb listing. At only 21 years of age it’ll be hard for him to catch at the MLB level.

Starting for the Yankees was prospect Ivan Nova. Born 01/12/87, Nova threw primarily fastballs, mixing in a slider here and there. He ended up striking out 7. I wasn’t overtly impressed with his fastball, which was in the mid-low 90’s with little movement.

Situational reliever Royce Ring came in to face his lone batter, a lefty. Mark Melancon pitched two scoreless innings. having trouble finding the strike zone but escaping unscathed. Finally Johathan Albaladejo came in for a shaky save in the 10th. 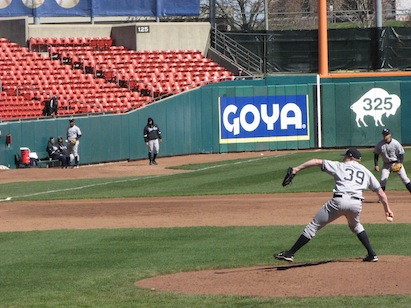 This ended up being the last minor league game for super-prospect Ike Davis. He hit fourth in the lineup, sandwiched between fellow prospect Fernando Martinez and 300+ HR (in the minors) slugger Mike Hessmann.

Another hot shot prospect playing in Buffalo Blue was catcher Josh Thole. After hitting .321 in 57 PA for the Mets in 2009 many were pushing for Thole to start the season in NY. Last season in AA he hit an impressive .328 (with 42 BB vs only 34 SO). The problem with Thole’s game is his lack of power, as he hit only 1 HR in over 400 PA’s in 2009. The Yanks also ran wild on Thole, stealing three bags in four attempts. On the plus side he exhibited plus speed for a catcher. I see him as a poor man’s Jason Kendall at the MLB level.

Down at the bottom of the line-up was Ruben Tejada. He’s a top 10 organizational prospect as a natural SS. The plan is to give Tejada multiple starts at 2B due to the presence of Jose Reyes. In my eyes this limits the value of Tejada, as he’s another no-pop Met farmhand (.381 slg in 2009). 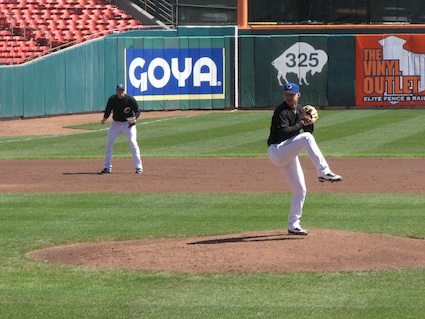 The Bisons ran out four former MLB pitchers during the 10 inning game. Southpaw Bobby Livingston, the former Red, battled control, walking three hitters over 5 IP. He was followed by former A’s set-up/closer Kiki Calero. Lefty Mike O’Connor pitched a frame. Finally Manny Acosta came in for 2.1 IP of work. He allowed a two out game tying HR to blow the save and eventually allowed the winning run in the 10th.