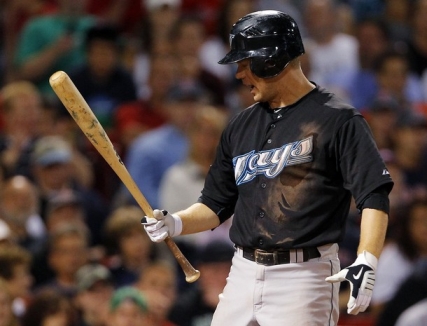 Much has been made of the fact that in 2010 Aaron Hill had the lowest BAbip of any hitter since 1900.  Because he was so unlucky, one might assume that Hill will rebound in a big way due to the law of averages.  This may not necessarily be true.  Here’s why: 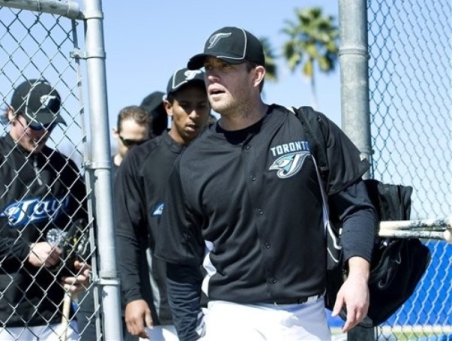 Matthias tackled this issue in an earlier post and I am going to build on his premise.  From Matthias’ post I know that Aaron Hill’s line drive percentage is a very low 9.9%.  For a guy who hit 36 jacks and 37 doubles in 2009 that seems awfully low doesn’t it?   So if he’s not hitting line drives, what is he doing?  That leaves ground balls and flyballs.

Where are these ground balls and flyballs going?

Approximately 55% of Aaron Hill’s balls are heading directly for left field. More than half!  What does that tell me?  It tells me he is pulling the ball and most likely turning on pitches in (and out of as you’ll soon see) the strike zone in order to jack them out of the park.  This approach often leads to a a hitter’s head “coming off the ball” – this means that when he is turning on the pitch to pull it out of the park, his head will turn with his body and he will lose sight of the ball.  This will cause a hitter to roll over the pitch, inducing a weak grounder or (more often than not) a hitter will get under the ball and hit a harmless flyball to left field.

Now I know what you’re thinking.  “What about Jose Bautista?  All he does is pull the ball for jacks too.  He only hit one opposite field home run all season!  How come he was so successful?” 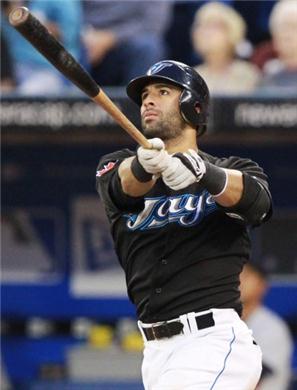 However, Bautista’s line drive percentage (approx 14.5%) is almost 50% better than Aaron Hill’s.  This tells me he isn’t as homer-happy as Hill.  He’s not afraid to drive the ball to the gap for a double.  Furthermore, Bautista has a much better approach at the plate than Hill.  Let’s compare the hit zones between the two players. 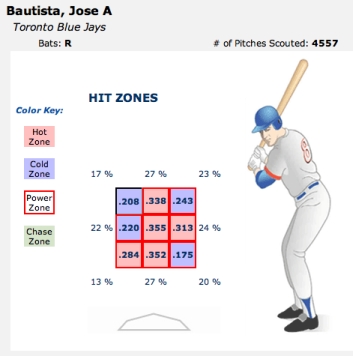 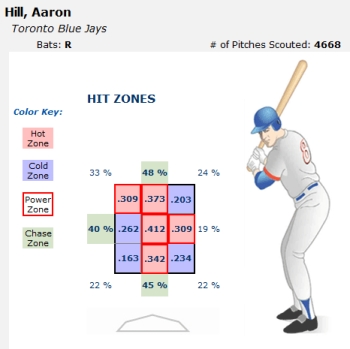 First let’s talk about Jose Bautista.  Matthias said it best in his post: “What makes Jose special is his ability to control the outside and down portions of the plate. .352 low and center, .284 low & away.”

Contrasting Bautista’s extroadinary strike zone control is Aaron Hill’s propensity to chase balls out of the strike zone at almost double the rate of Bautista.  These pitches are what cause the weak grounders and Hill’s penchant for working the pop-up duty role.  The reasons hitters chase pitches out of the strike zone vary.  They can include declining vision (get your eyes checked!), anxiety, pressure, self-doubt/negative thoughts etc. etc.  When in the midst of a deep slump, hitters will often times try to force the issue when it comes to breaking out of the slump. Instead of waiting for their pitch to hit a-la Jose Bautista, they are over-anxious and will swing at just about anything.  An opposing pitcher can smell this desperation a mile (or 60 feet 6 inches in this case) away.

Back in my day when I used to pitch,  if I saw a guy like Aaron Hill ready to jump out of his shoes in order to break out of the slump and/or hit a home run, I would feed him a steady diet of off-speed or breaking stuff.  Did Major League pitchers use the same approach?  You bet.

Hill was downright awful against curveballs and changeups.  If you are a left handed pitcher with a bender and you are facing Aaron Hill, it’s a no brainer.  Almost an automatic out.  The reason for this is that when a hitter is trying to pull the ball out of the park and “flying open” like in Aaron Hill’s case, he will always be way out in front of the changeup and will typically hit it harmlessly into an out.  Add movement to the pitch (in the case of the curveball) and it is near-impossible to make good contact with the pitch.  In Hill’s case his lack of success is compounded as pitchers don’t even need to throw their pitch for a strike because Hill will most likely chase it.

When Hill was at his best in 2008, he was hitting so many home runs that he was invited to participate in the home run derby at the All-Star Game.  Hill declined.  Why?

“If I start trying to hit everything out, I could mess up my swing,” said Hill.

“I’m just getting lucky,” Hill said of his long-ball prowess. “I’ve said it all along; I’m just trying to hit line drives. When they go out, I’ll take them every time.”

That quote is almost exactly the same as when Bautista was asked about HIS home run hitting prowess before hitting his 50th HR:

“I really don’t think I’m a home run hitter. I do try to hit the ball hard. If it goes out of the yard I’m not going to complain.”

Because of the reasons mentioned above, don’t bet on Aaron Hill to rebound because of a record-low BAbip being perceived as an “outlier.” Aaron Hill has messed up his swing and his struggles are not due to bad luck alone.  If Hill is to regain his form, he will need the help of hitting coach Dwayne Murphy to fix his swing and approach at bats with a ball spraying, line-drive mentality.  This will be no easy task for Murphy, especially since he was quoted as saying Aaron Hill is the most difficult Blue Jay to work with because Aaron is “so hard on himself.”  Although Aaron Hill is more than capable of a rebound, don’t think it has anything to do with luck. 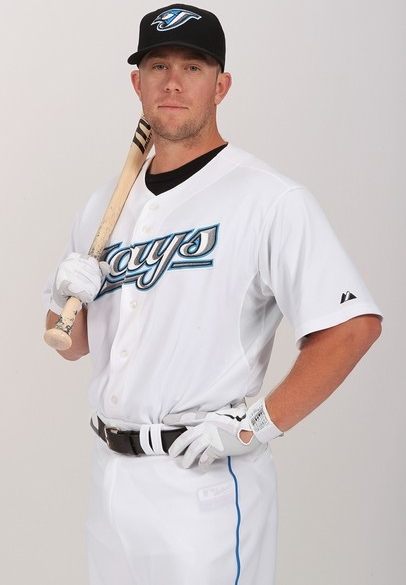