First things first. Thanks to everyone that attended last nights liveblog over at TheScore. I had a great time. Extra thanks to the many commenters throughout the game.

I may have to change my stance on Ricky Romero. You see, I’ve been pretty hard on him for a few years and especially since he was touted for a rotation spot in the off-season. My line of reasoning was “what has he done to earn a spot?” He did plenty last night.

If I can take only one thing away from his start last night it’s that he’s a battler. Ricky was behind early in the count roughly half of the time last night, yet he didn’t surrender a walk. And he really manned up in the bottom of the 6th. With the bases loaded and none out Romero was able to get a much needed strikeout (his first of the night) and they force Crede into hitting a comebacker to the mound that resulted in a double play.

Romero’s GB to Flyball ratio wasn’t spectacular numerically speaking, at 12 – 9 but the majority of those 9 flyball were softly hit and no real threat.

With the injury to Litsch, Romero jumps up into the #3 spot in the rotation. The Jays could have a VERY nice rotation towards the end of the season if Cecil joins the club in a couple of months. 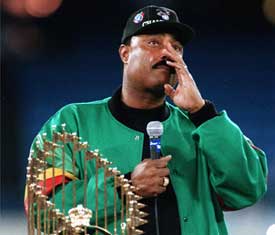 I also have to give some props to Cito. He was really a players manager last night, letting pitchers stay in the game and finish what they started. I also liked his insertion of Johnny Mac into the game to pinch run for Rod Barajas in the top of the 7th.

The Jays aren’t going to lie down for anyone this season, that much is clear from the early going. This is a great sign for a team that was 24 – 32 last season in one run games.