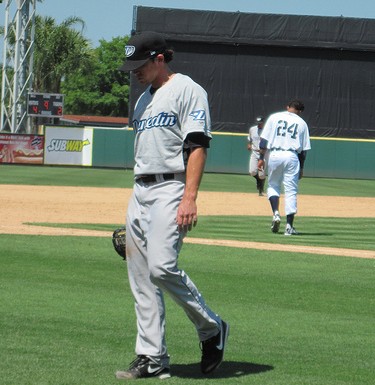 With the recent departure of Tim Collins to the Atlanta organization in the Yunel Escobar/Alex Gonzalez trade, the Blue Jays will need a new reliever to backfill the “phenom” position that Collins left behind.  Enter Alan Farina, the new Tim Collins save for the extraordinary strikeout numbers.

The 5’11” 190-pound Farina is a 4-pitch pitcher, possessing a fastball that maxes out at 94mph, an average slider, inconsistent curve and above average changeup.  He has great poise on the mound and is very aggressive in attacking hitters.

Alan Farina was selected by the Toronto Blue Jays in the 3rd round (115th overall) out of Clemson in the 2007 amateur draft after the righty went 6-3 with a 3.77 ERA, 72 Ks in 57.1 IP.  Farina was assigned to single A Auburn of the New York Penn League in a relief role. Farina struggled after being promoted to Lansing in 2008  and then to Dunedin in 2009 due to shoulder (impingement) and elbow (partial tear of the ulnar collateral ligament) injuries. 2010 is the first season that Farina is 100% healthy and he began the ’10 season in Dunedin. 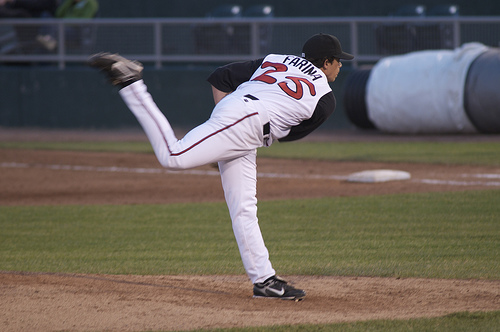 I saw Farina pitch an inning in spring training and he didn’t look all that impressive to me.  He induced a groundball, got a fly-out and struck out a lefty on a fastball on the outside corner.  However, all of the Jays prospects on hand to watch the game were whispering to each other “ooOOooOOOh Farina is in! Check it out, it’s Farina!!” 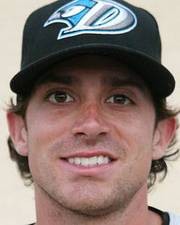 Farina came out of the gates hot in Dunedin and immediately stabilized their bullpen while helping to lead the team to a first-half first-place finish, guaranteeing them a spot in the playoffs.  In 36 innings for Dunedin, Farina allowed only 19 hits while striking out 46 and walking 11.  He only allowed 5ER for a sparkling ERA of 1.24 and a BAA of .156.

After Dunedin secured a playoff spot, Farina was promoted to AA New Hampshire.  He’s pitched in only 5.1 innings since being called up but has continued his success. Just look at his numbers below.

Farina was placed on the 7-day DL following his last appearance on July 3rd.  I haven’t been able to discern what the injury is, but I hope it isn’t related to his old elbow and shoulder injuries.

All you heartbroken Tim Collinsophiles out there take solace.  There is a new pitching phenom in the Jays system to obsess over.

ESPN’s Keith Law saw Farina in the AFL and doesn’t quite agree that he is the next Blue Jays pitching phenom.

“Farina was 89-92 with an average cutter, didn’t show another pitch.  Middle relief type.”