An Exercise in Contrasts: Greinke vs. Eaton 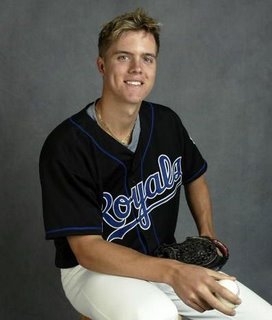 In one sequence of pitches on Saturday, Greinke followed a 96 mph fastball with a 69 mph curveball. Tony Randazzo, the home plate umpire, remarked to Olivo in the middle innings, “He’s got good stuff.”

“I hope he goes to the ninth inning,” Olivo replied.

Sure enough, with his pitch count well under control, Greinke struck out Chris Davis to finish the game. Olivo met the pitcher halfway between home plate and the mound. “You’re the best,” the catcher told him. “You’re going to win the Cy Young Award some day.”

Maybe that will happen this year.

Greinke, the Royals’ electric armed right-hander, has put together a start to the 2009 season that has everyone reaching deep into the history books. In spectacular fashion, he’s taking what many saw as great potential almost squandered and setting off a wild explosion of talent so far this year, making an early case for an All-Star start over our very own Doc Halladay.

Last week Greinke (6-1, 0.51 ERA) had his nine game winning streak snapped as he lost for the first time since Sept. 7 of 2008. The majors’ ERA leader gave up one run and four hits over eight innings of 1-0 loss against the Los Angeles Angels.

“(My stuff) was all right — I can’t complain but not good enough,” said Greinke, who had three-ball counts on six of the first seven batters. “It was a tough game. A loss is a loss. It might be a little tougher, but the end result is the same thing.”

Greinke has given up only three earned runs over 53 innings this season. Despite the loss, he still pitched his fourth complete game, struck out five and didn’t walk a batter for the second straight contest. The only run came on a sacrifice fly.

“From a pitching coach’s standpoint, I thought that was his best game because he didn’t have that electric stuff and he just pitched a heckuva game,” pitching coach Bob McClure told Major League Baseball’s official Web site.

McClure might deserve extra kudos, especially since Greinke credits him with his hot start to the season.

“I tried to fight it for a while,” Greinke said, “but you kind of realize that Mac still hasn’t been wrong in anything he’s ever told me. Not that I’ll listen to whatever he says right away.”

“He doesn’t just talk to talk,” Greinke said. “And when he does say something, it’s always right.”

“If you can go back and forth (throw inside and outside), and he does have the pitches for that, you can be more effective. That way, you can stay on the plate, and they mis-hit it. Whether they get a hit or not, you end up throwing fewer pitches.

“A large part of the credit goes to him for being able to do it.” 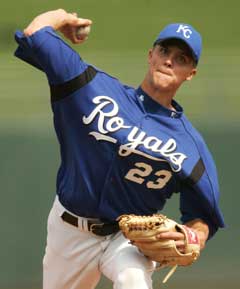 Adam Eaton (2-3, 7.18) will get the call (unfortunately) for Baltimore, and he’ll be trying to win consecutive starts for the first time since May 28-June 3 with Philadelphia. The right-hander gave up four runs and four hits — including two home runs — over five innings of a 12-5 win over the New York Yankees on Saturday.

Last year it was announced on July 18 that Eaton would lose his spot in the Phillies’ rotation to newly acquired Joe Blanton. Eaton was optioned to the minor leagues on July 28, 2008. He did not return to the majors until he was added to the September callups as a bullpen pitcher.

On February 27, 2009, Eaton was released by the Phillies. Two days later, the Baltimore Orioles signed him to a minor league contract and invited him to spring training. In an interview with MLB.com after the Phillies released him, Eaton claimed he was partially responsible for the Phillies’ success in 2007 and 2008: “A lot of things went wrong, but a lot of things went right, too. I helped them get to the playoffs two years in a row, and obviously we won the World Series last year.”

Eaton went 14-18 with a 6.10 ERA and 1.63 WHIP over two seasons with the Phillies and he was left off last year’s playoff roster and released before this year. 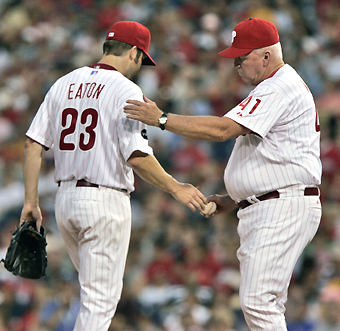 I’ll be liveblogging this game for your viewing pleasure tonight at TheScore.  Come by and we can revel in Zack Greinke’s dominance together.  Show up about 20 mins before and we can get to talkin’. One more time, it is http://liveblogs.thescore.com/Event/MLB_-_Orioles_vs_Royals

Oh, one more thing.  Those in the Zaunbie Nation can rejoice as Gregg Zaun will most likely be starting behind the plate for the Orioles. 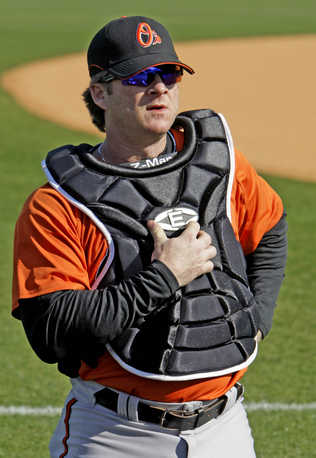