As I’m sure Jays fans are aware of by now, Anthony Gose stole four bases last night, including pulling off a rare trifecta, stealing second, third and home during the same inning.

[blockquote variation=”blue” cite=”John Farrell” citeLink=”http://toronto.bluejays.mlb.com/news/article.jsp?ymd=20120329&content_id=27727752&vkey=news_tor&c_id=tor”]”I never saw anybody steal second, third and home in the same inning in my career,… He is obviously exciting. He can take over on the basepaths. He has a combination of pure speed, plus the ability to read some things. You just turn him lose. He’s a pure basestealer.”[/blockquote]

Dodgers SS Dee Gordon was the last player to ‘officially’ swipe 2nd, 3rd + home in an MLB game, back on July 1st, 2011. I used the word ‘officially’ because, Gordon’s steal of home came during a double steal.

Although it’s only spring training, this is the stuff of legends and Gose’s popularity will undoubtedly rise. Twitter was on fire last night with tweets regarding Gose. Here’s my favourite:

There’s not much left to say about Anthony Gose that hasn’t already been printed/blogged. Jays sites, including mop-up duty, have covered him ad nauseum. (However, If you’re so inclined, you can see a list of our Anthony Gose articles or see multiple bloggers opinions on his ceiling via our 2012 Blogger Roundtable)

After the Jays were able to acquire Gose, along with relatively low market value of speedsters (the 2011 mid-season deal of Michael Bourn comes to mind), I began to wonder if speed is the new extra 2%? 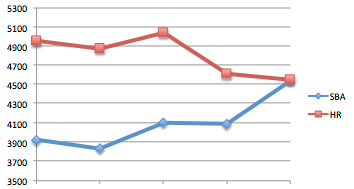 Clearly a shift from HR to speed.

However, when it comes to vaulting players in the world of publicly available Sabermetrics, stolen bases are merely a blip on the radar.

The two major sources cited on the internet for WAR are Fan Graphs and Baseball Prospectus. As I looked at last week, these websites handle SB in different ways. The cliff notes version is:

Fan Graphs = no consideration for SB, only base running advancement

Baseball Prospectus = consideration for SB, along with advancement factors. 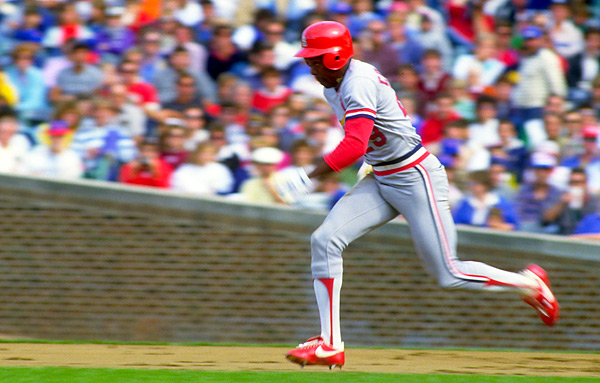 Let’s look at someone like Vince Coleman. Coleman was an absolute beast when it came to stealing bases. He once stole 145 bags in low A and he was able to carry his triple-digit ways over to the MLB, stealing 100+ bags in each of his first three seasons.

Yet Coleman couldn’t slug his way out of a paper bag. He hit on average around 2 HR per 650 AB during his prime. He was also, sabermetrically speaking, a subpar fielder. His OBP wasn’t anything to write home about either, as it typically hovered around league average. Put all of these things together and Vince doesn’t add up to much in the eyes of Sabermaticians.

Look at 1986. A very Sabermetrically friendly 88% SB rate on 121 attempts and depending on the source, he’s either slightly above replacement or below.

Coleman is certainly a rare case. These days one dimensional players aren’t worth much if anything in the eyes of Sabermetrics. The Jays Rajai Davis and his negative WAR last season is a perfect example.

Even though Rajai played sub-par D, had a joke of an OBP and didn’t live up to his pre-season HR hype, I believe he (and similar players) still add value to a ball club. And I certainly believe Coleman was more than a break-even player to the 1986 St. Louis Cardinals.

If SB’s count for little or nothing in Sabermetric terms, how do players get valued?

That’s the question. To be honest, I don’t have a statistical answer.

I’m sure most teams have a secret sauce to determine this. For the rest of us, it’s an inexact science.

Statistically minded Jays watchers will be tested with a player like Gose. We’ll be able to calculate his defensive & offensive contributions once he lands in Toronto, throw them into a blender and come out with a WAR number. The rest of his value, and I believe there will be value, will likely be judged on an individual basis, with often used phrases such as ‘game changer’, ‘disruptor’ and ‘difference maker’ uttered by prognosticators and fans alike.