Bloomberg recently introduced an App to the Apple iTunes store, titled Bloomberg Draft Kit ($2.99 iOS universal, $4.99 iPad). The app uses some of the same information as the $19.99 front office online subscription but at a discounted price. Below is the official write-up from Bloomberg, along with my review of the apps specific modules.

[blockquote cite=”Bloomberg Draft Kit App Official Teaser”]Bloomberg Sports’ Front Office 2012 Draft Kit for iPhone features customized rankings and player information to help you prepare for your fantasy baseball draft and pick a winning team. Outsmart your friends by using draft lists tailored specifically to your league and scoring settings. Strategize with detailed information on every baseball player, including access to our unique Fantasy Factors. And when the draft kicks off, use the Draft Mode to keep you focused on the remaining available players.[/blockquote]
Module Reviews

Since the app can connect to ESPN/CBS/Yahoo fantasy leagues, one would logically assume that the live draft would be synced to the app. This is not the case, rendering the draft mode essentially useless, as picks have to be manually inputted by the click of a button.

For drafts such as Yahoo!, etc, it’s difficult to keep up with the draft proceedings, determine your next pick, category needs, and manage numerous other factors while being expected to push the little red draft button for each and every team partaking in the draft. 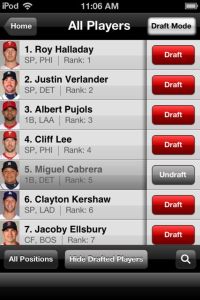 Due to this, the draft mode is an empty feature.

Rankings are clearly subjective. My ranking of the top 40 will certainly be different than yours, the next person and so on. However, the bloomberg offical standard 5×5 rankings are so far from conventional wisdom that it would hinder an owner on draft day.

For example, Dan Haren is ranked 9th overall, Jered Weaver 10th. These two can be had much, much later in most drafts. Jose Bautista (12th) and Ryan Braun (13th), both of whom are standard top 10 picks, would be bypassed when using the bloomberg rankings.

I hate to say it but in terms on player rankings & drafting mode, this app fails. However, the real value of the app lies within other aspects such as:

Frequent updates are one of the best features to the app. Recently the Astros named Bret Myers their opening day closer. This positional change has already been factored into the bloomberg app. Myers rank has climbed up and he is now projected to earn 22 saves according to Bloomberg’s projections. 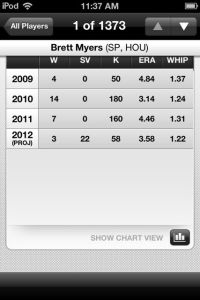 Edwin Encarnacion is on everyone’s sleeper list this season. He’s a cheap source of power & RBI’s. Bloomberg ranks him 227th overall. Last season he ended up as the 174th most productive player. And this season his average draft position (ADP) is 212th, which is down 9.4 slots using their ADP +/- system.

This is the real value of the app in my eyes, at my fingertips ADP postion and ADP swings. Within the third base position, here are the following ADP gainers & losers: 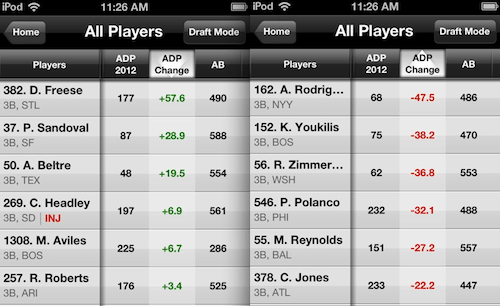 World Series face time has really pushed Freese & Beltre up the rankings. Sandoval is undervalued at an 87 ADP & owners are taking advantage. On the flip side, Arod, Youk & Zimmerman are coming off subpar 2011 seasons and market isn’t buying into performance rebounds. Looking at ADP swings is a great way to spot target potentially overpriced & undervalued players.

The app has a few simple lists, such as Top Sleepers, Top Busts, Top prospects, Injuries, etc. If you’re a casual player these lists are a good reference resource. 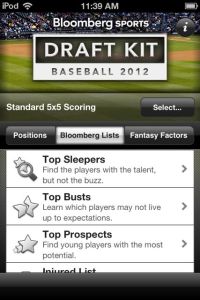 Verdict – Know What You’re Getting Into

The app is marketed as a syncing draft kit but in realitly it doesn’t deliver on it’s promise. The reviews on the App Store slam the app for not delivering a draft experience. And I’d have to agree with the angry customers.

The app is best used in the information gathering stage and as a suplement to a draft. I give the app a slight recommendation for this factor alone but your mileage may vary depending on your needs & wants from this draft app.

I will add an update to this review in early May, with an eye towards how the app handles in-season injuries, depth charts and production in terms of rankings valuations.