So the Jays wanted a defensive backup behind the dish. They filled this role with Jeff Mathis at the cost of Brad Mills, whom the Jays likely wanted to move off of the 40 man roster, thus making Brad expendable.

My Thoughts on Mathis

As you can see, I’m not a fan of Mathis, even if AA loves his defensive skills 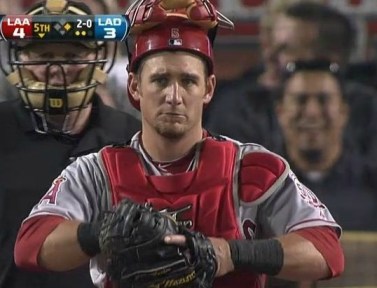 Personally, I’d rather save on salary, bring in a AAAA type backup behind the plate and trade Mills for an A ball type player that doesn’t fill up a slot on the 40 man roster.

One such AAAA type guy that the Jays have been bouncing about is Brian Jeroloman. I’m not as much in favour of Jeroloman as I am a warm body (like a Fasano, Chavez type of the past).

But since Jeroloman has been around the org for a while, I can use him as an example.

He receives high marks for his sure hands, sound footwork and above-average blocking and receiving skills…. is agile behind the plate and has advanced game-calling skills.

MLB.com: He was added in late August but dealt with a jammed right wrist for much of the time that he was up.

The Way I See It:

While he’s not much of a ballplayer, the overall package of Jeroloman/Salary/A type prospect is far superior to the Mathis deal. Feel free to sub in your favourite AAAA type catcher into the equation.