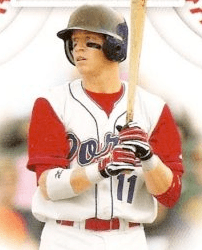 Sean Doolittle is one of the seemingly endless supply of solid Oakland A prospects. And he is even an original A draft pick, taken in the supplemental first round of the 2007 draft.

Oddly enough Doolittle is not a prototypical money ball player. In 2008 he struck out an astounding 158 times vs only 63 walks. He did make up for this by hitting 22 home runs, although he did struggle in the AA Texas league.

In the AFL he is one of the HR leaders, hitting 6 in 20 games. Expect Doolittle to repeat the AA level at the beginning of the 2009 season, even with his stellar Arizona Fall League performance. 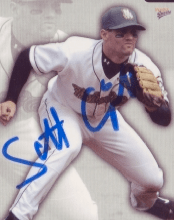 New Zealand born Toronto Blue Jay prospect Scott Campbell is proving to be a 2006 draft steal, taken 300th overall. This guy loves the walk. Spending the entire season in AA Campbell hit .302, with 66 BB vs 62 SO for an OBP of .398. The problem for Campbell has been his lack of power. He slugged only .426 in 2008 (and only .397 in 2007). Still, second base has become one of, it not the, weakest offensive positions in all of baseball. 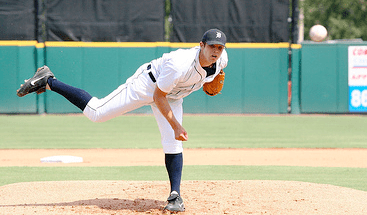 Fantasy players should keep an eye on Casey Fien. A longshot for the closers role at some-point in Detroit next season, Fien struck out 59 (vs 16 BB) in 60 innings between AA & AAA, with a combined 2.82 ERA and OBA of .231. In 2007 he struck of 77 (vs 10 BB) in 61 IP. With the Tigers bullpen being suspect to say the least, Fien should at minimum see some time in the bigs in 2009. During 2008 spring training Jim Leyand said the following about Fien:

That was the guy I was talking about when I said I’d gone over to the minor-league field to watch someone. I’d seen someone over there I liked. I liked what I saw the other day, and wanted to see it again. 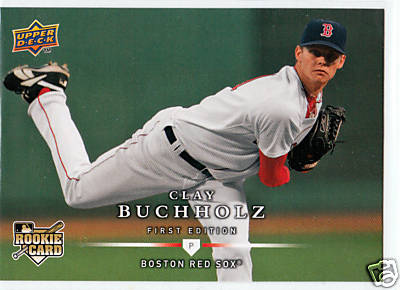 You may have heard of this guy. Boston Red SoxClay Buchholz. Yep, Clay had a pretty poor 2008 MLB season. Some say mechanics were to blame, others say he was trying to be too fine with his pitching. The fact of the matter is his BB/9 was above 4.5 and he allowed 93 hits in 73.2 IP. This is from a pitcher that had over a 5/1 SO/BB ratio in the minors in 2007. He’s got the stuff, he just needs to work out a few kinks before he’s back to being a productive major league starter and a future MLB Number 1/2 type pitcher. 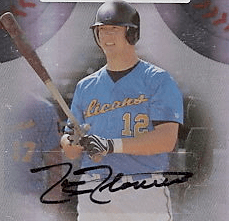 Another Atlanta Brave name that’s been batted around in the Peavy rumors is that of catcher Tyler Flowers. In AA Flowers posted some great numbers. An OPS of .921, 17 HR and 98 BB. He even attempted 15 steals. One big question with Flowers is will he stay behind the plate. Don’t be surprised if Flowers is dealt or ends up playing 1st for the Braves in a year or two.