AT&T Park (formerly known as Pac Bell Park) is the current home of the San Francisco Giants and has been since 2000.  It is widely regarded as the crowning achievement in the neoclassical ballpark movement spearheaded by the HOK sports/Populous architecture firm.  For me, the best part about AT&T Park is that there is water directly beyond the right field perimeter since the ballpark is situated adjacent to the Bay. 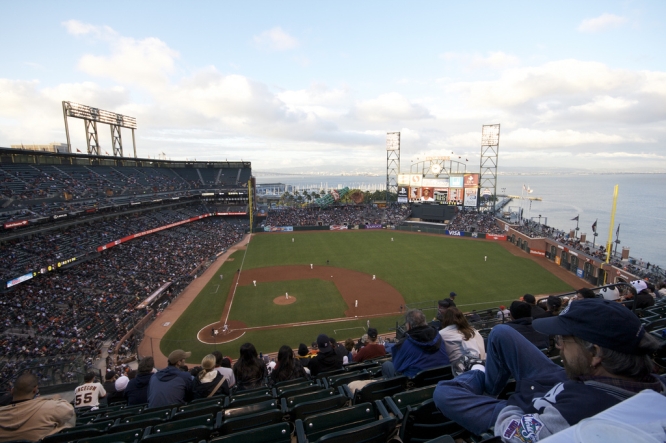 As much as Petco Park was designed to prevent home runs from left-handed sluggers, AT&T Park was built to favour the left-handed slugger – particularly Barry Bonds.  The right field fence is a short 309 feet away from home plate, however the fence stands 20 feet tall to give it some level of respectability.  Whether you are young or old there is no denying the attraction of seeing a “splash hit” home run.

The distance increases markedly to the right corner of centre field at 421 feet.  This makes it a haven for triples and inside-the-park home runs.  This corner was definitely in the thick of things on the day I attended a game between the Giants and Padres.

While the park is situated directly on the Bay, it is also bordering on downtown San Francisco which is key for pre and post-game festivities.  Public House, Nova, Momo’s and Palomino are all great places to grab a drink and unwind.. or wind up, as the case may be.

When you go to the game, don’t make the same mistake as me – dress appropriately.  Over the duration of my trip to San Francisco, the thermometer never rose above 15°C.  Once the sun came out the weather was pleasant enough, with a nice sea breeze while the ballpark was bathed in sunlight.  Still though, a little too chilly for my liking and this a typical summer’s day in San Fran.  I imagine the experience at a night game would be markedly different without the sun, combined with the sea breeze and much cooler temperatures.  I for one would be miserable – being bundled up is no way to go through life watching baseball games.

AT&T park is definitely a gem of a ballpark and is easy on the eyes. With its scenic bay backdrop, palm trees and red brick construction, it is as warm and inviting as a ballpark can possibly be. 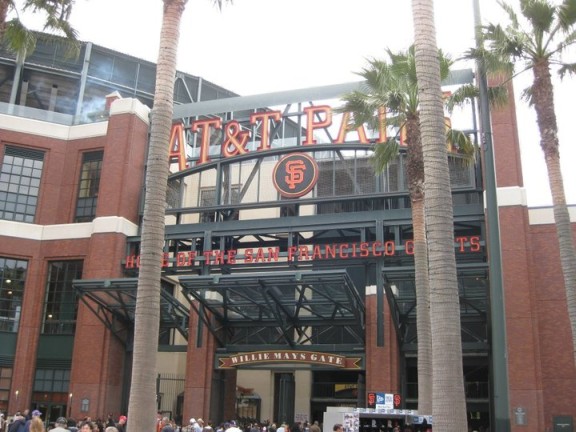 The ballpark is also packed on a daily basis.  The capacity of the park is 41, 500 but there were more than that on the day I went – all standing room only sections were full.  The right field concourse is a popular section for general admission patrons to take in the game as well as watch the kayakers in the bay below.

I was able to get a seat for $65 about 5 rows from the field on the 3rd base side through StubHub.  As I made my way to my seat I became filled with anticipation as to how great a seat it was going to be to watch the game.  I really lucked out, I thought to myself.  But it didn’t turn out to be such a great seat after all.  Surprisingly, for a baseball-only stadium, the seats are not angled towards the play.  Everyone in my section had to sit back in their seat and watch the game through the side of their eyes because if one fan were to lean forward, it would block the view for everyone else.  Very disappointing.

Concessions? AT&T Park has got it on lock.  Anything you want you can pretty much get here.  Regular BBQ. Caribbean BBQ. Crabcakes.  Sausages of all shapes, sizes and flavours.  Ghirardelli chocolate sundaes. Lemonade.  Sushi.  Mexican. Krispy Creme donuts.  Fried calamari. Of course, there is always the famous Gilroy’s Garlic Fries. 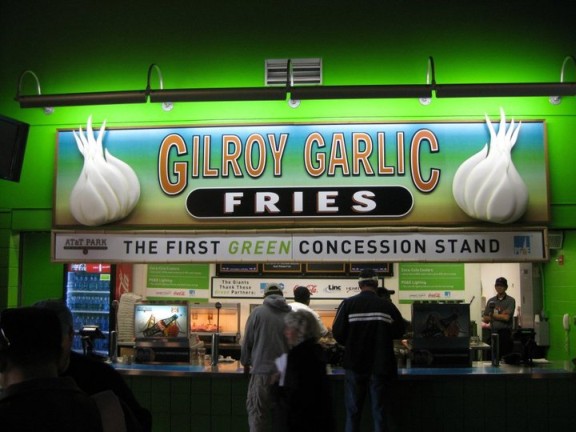 Gordon Biersch’s now-classic creation of ground garlic, herbs, and parmesan cheese served over French fries has been imitated but not yet duplicated at ballparks across the country. Hot, spicy, and chock full of flavor, garlic fries are just the thing to ward off the chill of a nippy night or to give a chilly post-game “boo-ya!” to an opposing pitcher heading for his car. At one time, Gordon Biersch used fresh garlic cloves exclusively and if you couldn’t handle the zing — tough luck for you. But the fries left patrons with breath worse than Thurman Munson’s after a three-day bender, so out of necessity, Gordon Biersch replaced the fresh garlic with minced. But believe us, these fries are still plenty strong.

These fries were an abomination; absolutely terrible.  At their core this “signature food item” is a pile of soggy fries with minced garlic and parsley dumped on top.  What’s the point?  If the garlic was fresh and roasted it would have raised the bar exponentially.  The garlic was bitter and vinegar-y tasting.  I love garlic and it was a shame to have disrespected one of my favourite flavours in this fashion.  The only saving grace were the breathmints that came with the fries.  I eagerly chomped on them post-haste to get the terrible taste out of my mouth, which is not their original intent.

The scoreboard is pretty nice, a mix of new and old with a high-definition digital screen and an old school analog clock.  All of the pertinent stats can be found pertaining to each player along with pitch counts for each respective player.  Radar gun readings on pitches can be found all over the park. 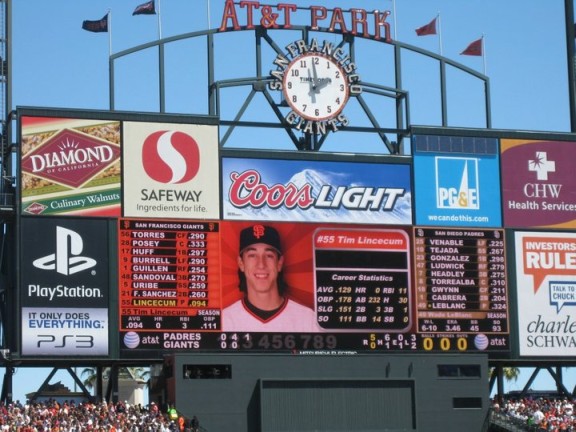 As for baseball related merchandise, the Giants do a pretty good job of it.  The store has two levels (similar to the one at Comerica Park) and has lots of old jerseys that pay homage to former Giants greats like Willie Mays and Will Clark.  The Giants jersey itself is very visually pleasing, especially the cream-coloured home jersey that gives a classic look as opposed to the typical white. 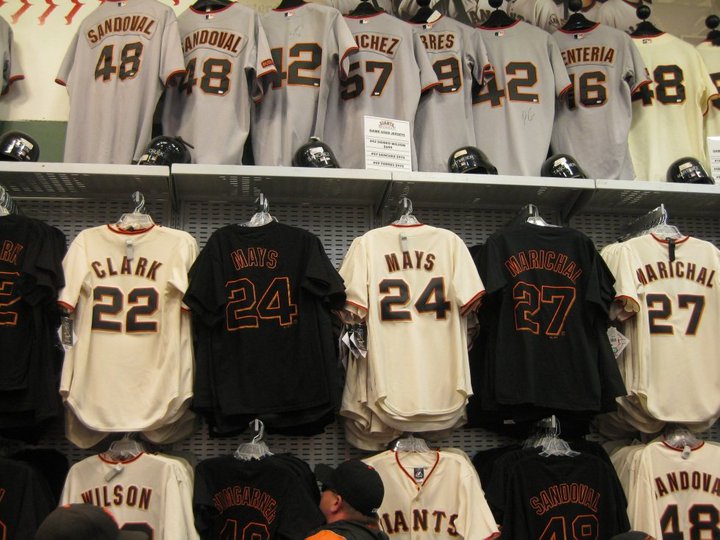 There were a few oddball items as well.  San Francisco Giants t-shirts emblazoned with Jerry Garcia’s face or Grateful Dead logos.  Sure, Jerry Garcia was born in San Francisco but what did he really have to do with the Giants.. or baseball in general?  This is most likely a case of the Giants trying to ca$h in by associating themselves with the marketing machine that is the Grateful Dead.  Just like at Angel Stadium, the Giants need to GET PAID like everyone else.  If it was a shirt with Steve Perry‘s mug on it, I would have bought 2 right away. 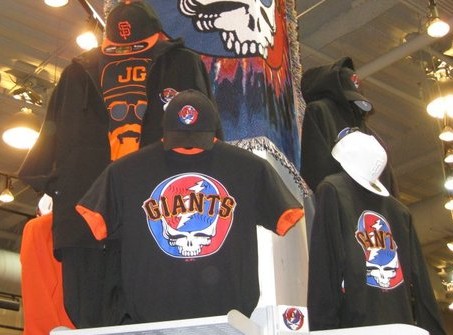 Another item that is different but fun is the Tim Lincecum wig. For only $10 you can get a ratty old wig so that you can pretend you are a pot-smoking diminutive former Cy Young award-winner.  Where was this when Dave Stieb was in Toronto?! 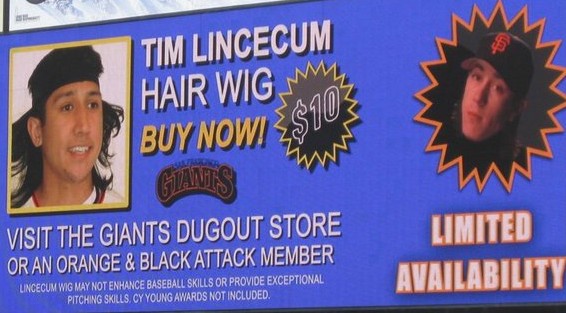 AT&T park has statues of all the greats. Willie Mays, Juan Marichal and Orlando Cepeda.  In this case I you are best served by viewing the pictures than having me describe them.  A picture says 1000 words… 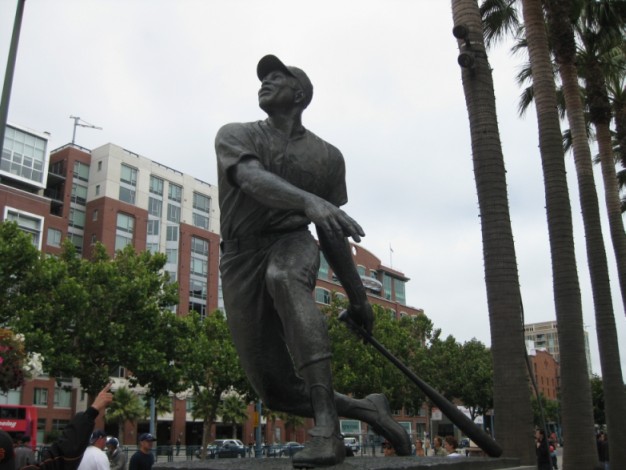 The field itself is expertly manicured.  Perhaps it is the cool, temperate weather in San Francisco that is conducive to grass growing, but I have never seen a field so green.  Whoever the head groundskeeper is, I hope that the Giants signed him/her to a long term deal.  Seriously, the playing field itself is magical. 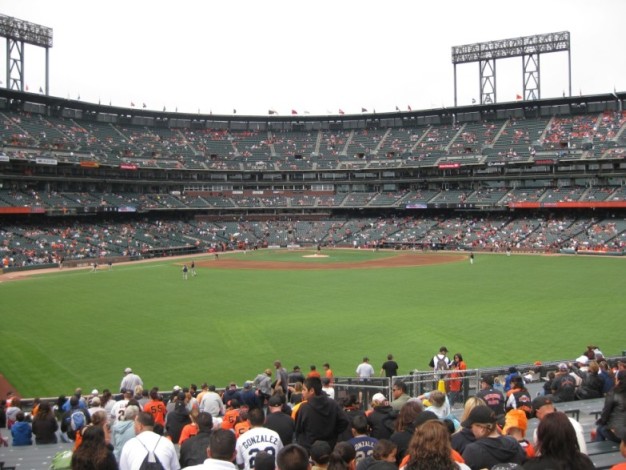 Usher staff were SUPER friendly. Is it any surprise that one of them was a Canadian? Prince, a Canadian who left Georgetown, ON for the warmer California climate is now an usher at AT&T and he took the time to talk with me about Blue Jays baseball as well as the nuances of this fine ballpark.  As far as the vendors in the stands, I am going to have to agree with Early’s review in that there were far too many of them and that they were extremely annoying and distracting.  Especially the “ice cold lemonade” guy.

Again, as Earl said, there was never a guy actually selling beer in the aisles.  The absence of a roaming beer vendor is very peculiar.

If you are one of those casual baseball fans who gets “bored” with the game, well.. you are in luck.  There is a tonne of fun stuff to do: watch the white caps dance on the bay while sailboats and kayakers pass by.  Drink a beer while walking in the bright sunshine on the right field concourse while singing along to (San Francisco’s own!) Journey.  For the kids there is a mini AT&T beyond the Coke bottle/glove and right underneath are slides and a playground.

Fans not all that loud, but it could be because the Padres took them out of the game early.  Although quiet, the fanbase is very knowledgeable with a solid grasp of the game and an endearing loyalty to the Giants.  The way it was a sea of red in Anaheim, it was the same in San Fran: a lot of very unattractive orange-and-black ensembles.  That being said that sea of orange and black never had a ripple; not once did fans participate in “the wave.”

When discussing or reviewing ballparks, many fans will reference the skyline beyond the outfield.  To me, AT&T does it right with a simple skyline of… pure, unadulterated sky, thanks to the Bay.  Left field corner is picturesque with palm trees and the Bay bridge. 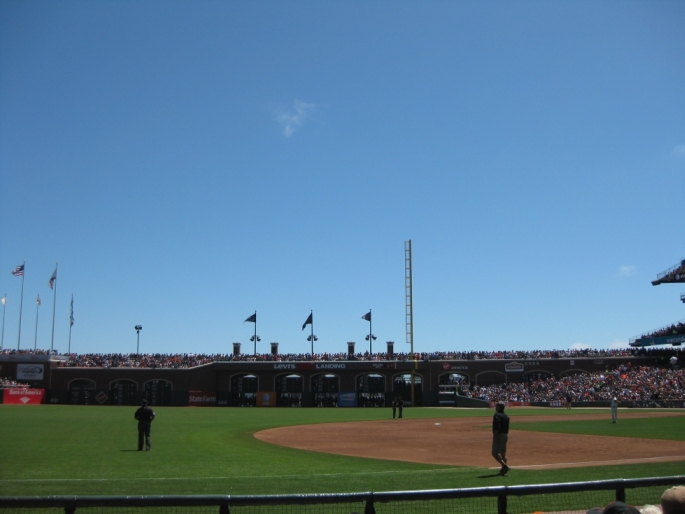 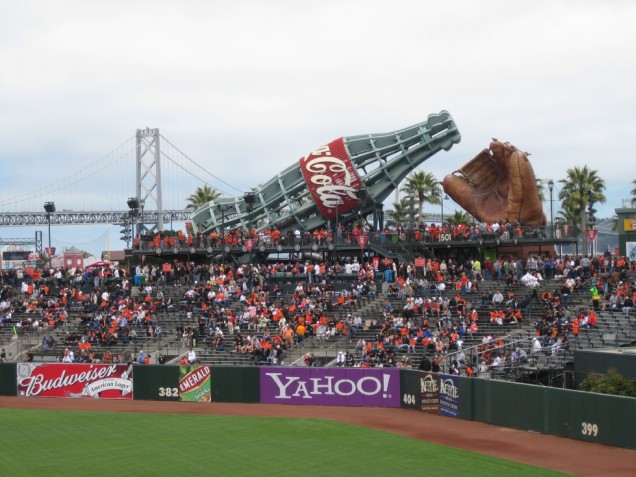 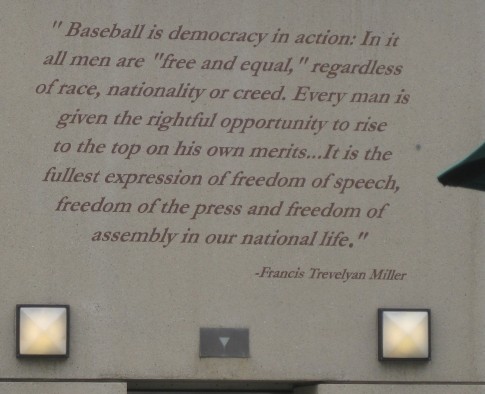 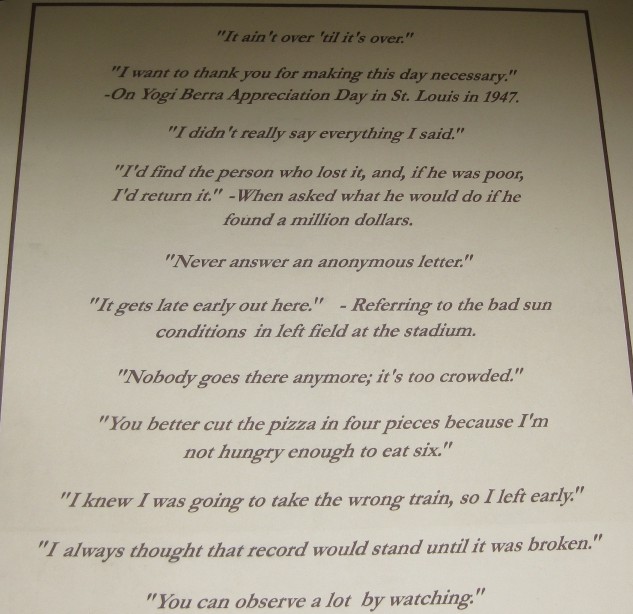 At the end of the day, it is difficult to improve upon the baseball experience had at AT&T Park and really, it is the cove that seals the deal on a solid baseball experience here.  If my neck wasn’t so stiff from the bizarre seating layout and the weather was a bit nicer, it would be close to a perfect ballbark.  The weather is a bit of a concern as well.  Alas, those are things that probably won’t change in the coming years.  A little bit more passion from the fans would have been nice, but on the other hand the west-coast-laid-back attitude has its charm.  Regardless, I highly recommend AT&T Park for all baseball fans.

Golden Gate to the left, Bay Bridge to the right, and my heart right to the center. There’s no better skyline in the world.

I think Toronto might have something to say about that. 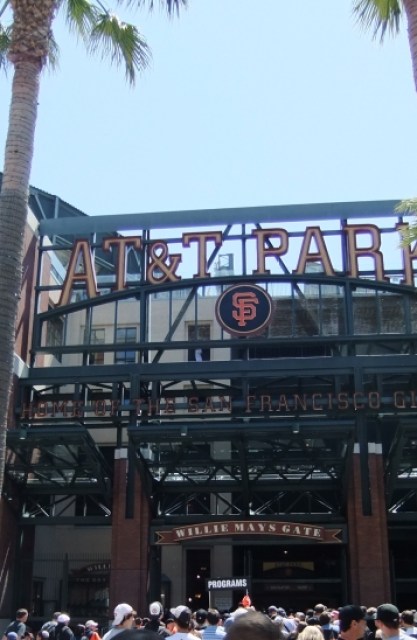 One of the highlights of my west coast trip was actually getting to San Francisco, and I did so by driving from LA up the Pacific Coast Highway.  The PCH is famous for running adjacent to some of the most beautiful coastlines in the world and it did not disappoint.  The scenery is stunning and the drive is exhiliarting.  From beautiful beaches to beautiful cars, you will see it all. 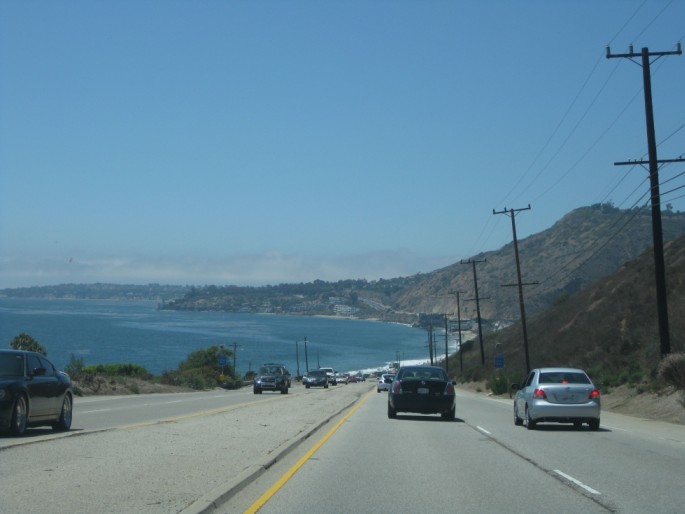 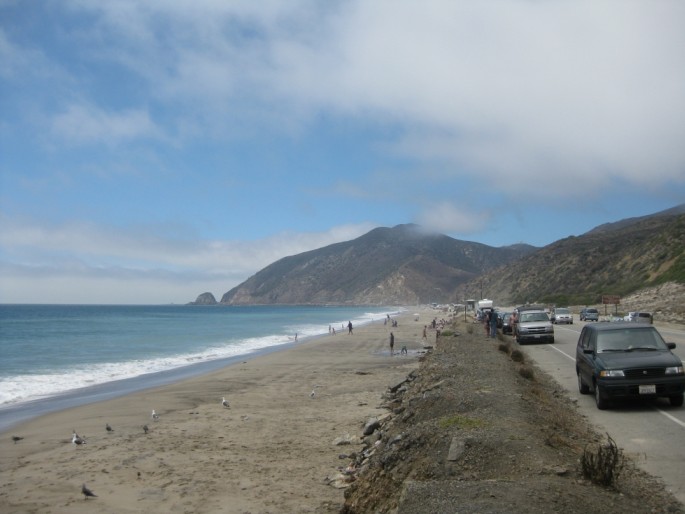 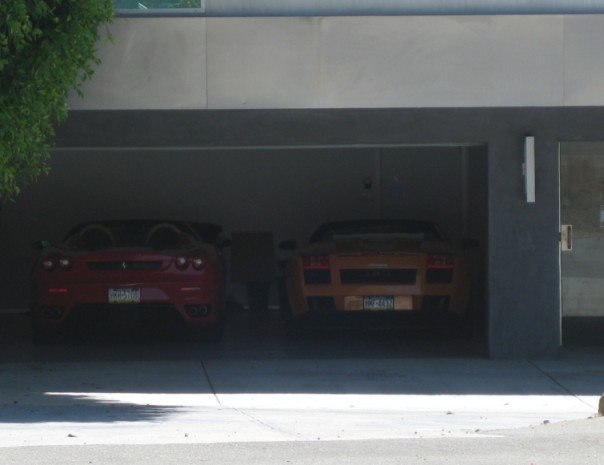 I even had the opportunity to drive through clouds during the early morning. 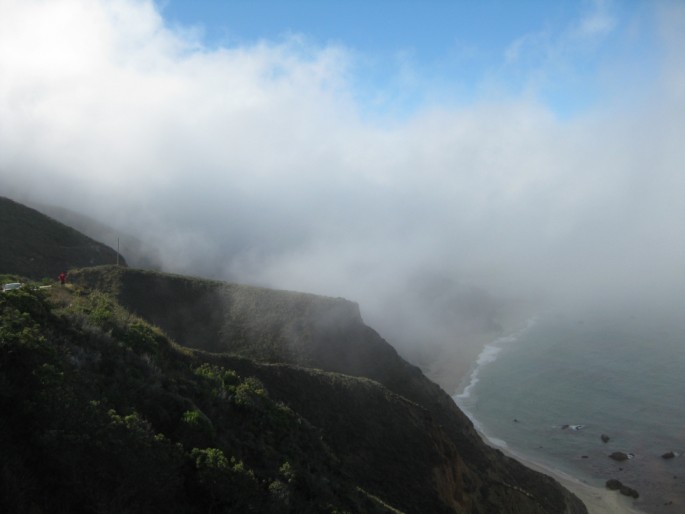 You will also encounter surfers, wildlife and picturesque houses along the way.  My journey had me start in LA, travel through Malibu and up the coast to San Francisco in a total of 11 hours.  Some points of interest that I encountered included: Laguna Beach, Newport Beach, Zuma Beach, Venice Beach, Santa Monica, the Pacific Palisades, Malibu, Pepperdine University, Ventura Highway, Big Sur and the Presidio of San Francisco.   The reason fo the length of the time it takes is that for most of the trip, you will be limited to speeds of 20-30mph due to steep and winding roads that run along cliffs that plunge into the sea. 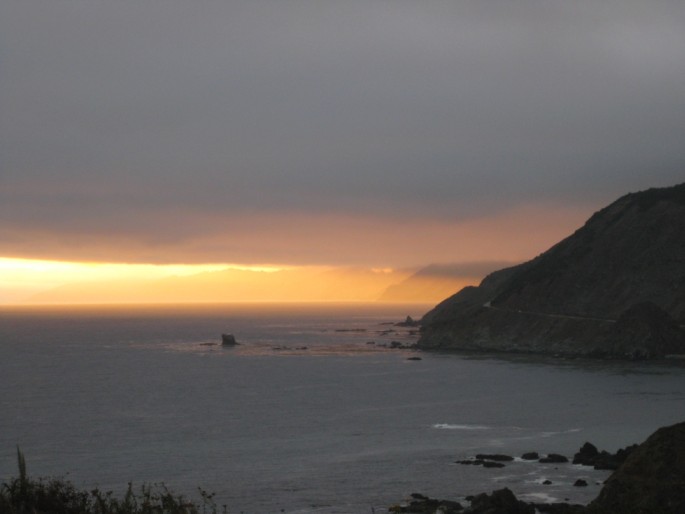 If you are limited to the Bay area, make sure to take the 17-Mile Drive, just between Carmel and Monterey.  Golf fans will know that this route leads into the famed Pebble Beach golf course.  The road runs beside scenic beaches and up into coastal hills, providing plenty of photo opportunities.

The best photo op probably lies with the Lone Cypress, the official symbol of Pebble Beach. 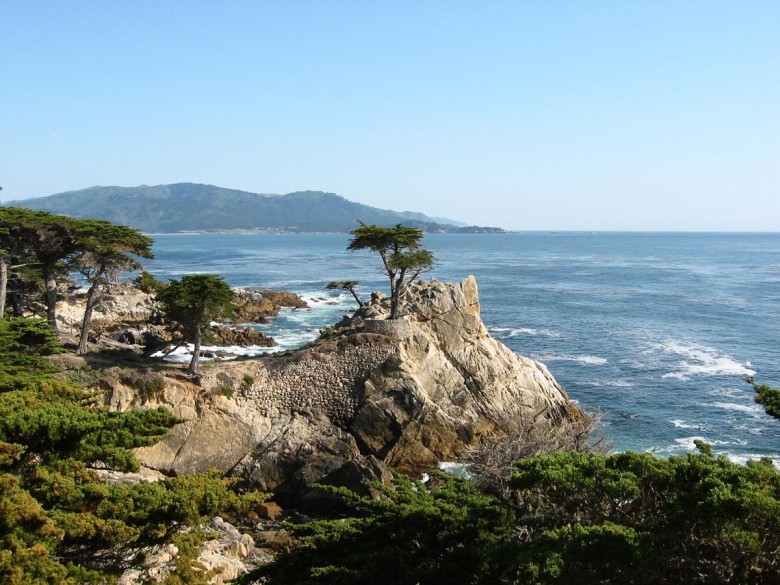 Evenings also provide the opportunity for spectacular sunset-watching.  Half Moon Bay is a great spot – especially when the moon has reached the halfway point of the lunar cycle! 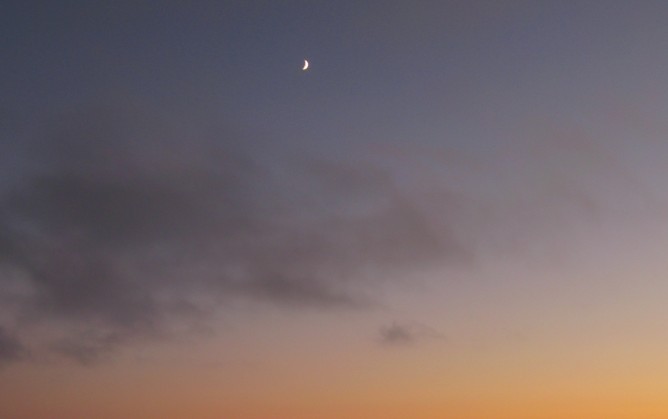