This is yet another entry in my ongoing ‘too early to tell’ series. This is more of an observation than a statement.

BABIP is down dramatically on ground balls and line drives

And some poorly made graphs for GB and LD: 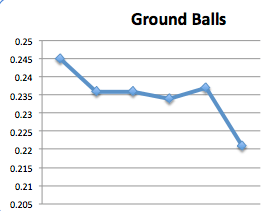 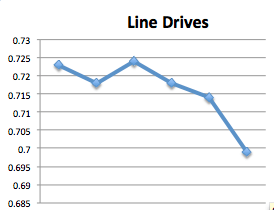 What’s going on? The only idea that I can come up with (and it’s only an idea), is the increase in defensive shifts across the MLB.

Dewan wrote an article recently on this subject. Here’s his conclusion on shifts

[blockquote cite=”John Dewan” citeLink=”http://www.billjamesonline.com/to_shift_or_not_to_shift/”]Unlike the anecdotal evidence showing how shifting seems to be working for the Rays and Brewers, we consider the 40- 50 point drop in batting average on grounders, short liners and bunts against the Ted Williams Shift to be direct evidence in favor of The Shift. Is it conclusive? No. Is it comprehensive? Not really. It’s only two years and doesn’t include all plate appearances. Is there more research to be done? Yes.[/blockquote]

I can’t track down any publicly available numbers online regarding 2012 shifts. From an anecdotal standpoint, I’ve seen more shifts than I can remember from numerous clubs this season. The majority are against LHB but I’ve also seen a few vs RHB.

I’ll jump back into this article on June 1st to see what’s going on with BABIP rates.

Are Lower 2012 BABIP rates caused by shifts? Is it too soon to draw any conclusions? Is there a different answer? Please share your thoughts in our comments section.