Barajas on DL. Offensivley who cares? Team ERA is the issue 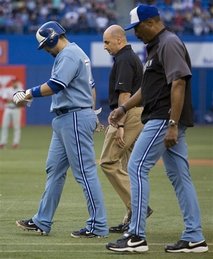 Rod Barajas landed on the DL after injuring his hammy friday night. (Note, Barajas actually isn’t on the DL yet. Many stories went out to that effect but the Jays are taking it day by day for now. Effectively he isn’t available for the time being) To be fair he’s probably been over-worked and this was just a matter of time scenario.

… ran slowly down the line after his two-out single to center off Hamels… bent over when he got to the bag and manager Cito Gaston and trainer George Poulis came out… Barajas tried jogging near the base before walking off the field. He was replaced by Raul Chavez.

I don’t think the Jays will miss his bat as much as some will think. As we all know, RBI’s are usually an opportunity type of stat. Many of the Jays best hitters were hitting down in the order at the start of the season (Lind & Rolen for example) and Rod cashed in his chances.

In his place vs righties will likely be Chavez. Chavez can’t hit worth a lick (.227 career batting average), although he does shut down opponents running games, with a career thrown out percentage over 45%. With this years increase in stolen base attempts I think the Jays will be fine in Barajas absence. Defensively this is an upgrade. The one question mark is how will the Jays staff respond to Chavez calling pitches behind the dish. That’s the real issue in my eyes.