Germany was first introduced to the game of baseball in 1936.  Baseball was added to the Olympics as a demonstration sport and Berlin, host of the 1936 Olympic games, staged a single exhibition game in front of 120,000 spectators. (source)  Following the exhibition, the secretary of the German Organizing Committee – Dr. Carl Diem – came onto the field to congratulate the players.

“I have come officially to advise you that this has been the finest demonstration of any sport that any nation has ever put on at any Olympic Games.  We congratulate you and speaking for my people, you have made over 100,000 friends here tonightand as you go home, America’s baseball players’ praises will be sung by all.”
source

Following the game, interest in baseball spiked in Germany.  Teams began to spring up in Berlin and the surrounding area.  Of course, with World War II commencing only three years later, the pursuit of sport was abandoned altogether – and baseball was no exception.  Yet American troops – who were captured by the Nazis and sent to POW camps – began to form baseball leagues.  With an estimated 90,000 American POWs, there were plenty of participants.  In the summer of 1944, there were upwards of 200 teams playing at Stalag Luft III, a POW camp.  The baseball was so intense that there was heated competition between teams for new prisoners with extensive baseball experience. (source)

When the war ended in 1945, so did the POW leagues.  Still, baseball played amongst American military personnel who were forced to remain in Germany would have a lasting impact on the Germans.  After the end of World War II, most of the country was divided into four occupation zones, whose administrative duties where controlled by either France, the Soviet Union, the United Kingdom, and the United States. In the American zone, an organization called German Youth Activities (GYA) was formed in order to help transition Germany’s war-torn youth into a peaceful environment.  Baseball was one of the sports that the military stressed, in part, because “the sport helped mould German minds along democratic lines.” (source)

The generation of German youth who played baseball in the GYA organization continued to play it into adulthood.  The popularity of the sport reached a sufficient level that a German baseball association was established to manage international competition.  Germany teamed with France, Italy, Spain and Belgium to form the European Baseball Federation.  While the sport was popular among players, games drew few German spectators.  When Germany hosted the European baseball championships in 1957, teams played in front of empty stands. 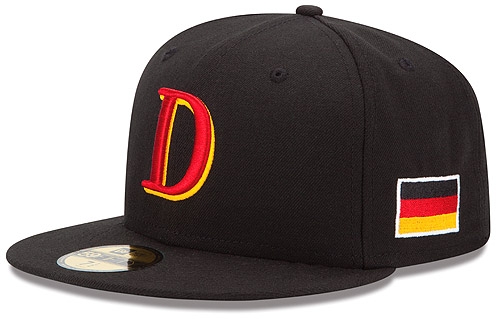 Domestically, German baseball was disorganized and had no cohesive grass-roots support.
In 1951, the first season of Baseball-Bundesliga was played, the first German domestic championship – yet the season and championship were unofficial.  The Bundesliga competed, unsuccessfully, against makeshift leagues that were played in American military bases. The sport wasn’t passed down from from the GYA generation to the next generation.  The Bundesliga was disbanded in 1970 due to organizational neglect, and in many places there was no structure and clubs acted independently.  Baseball was not part of the Deutscher Sportbund (German Sports Federation).  From 1971 to 1981, there was no national competition held, and baseball disappeared from the national sports scene. Few youths played the game and there was no support structure for those that did. In 1979, Germany had but a single club team – the Mannheim Tornados.

That all changed In the mid-1980s, when an official governing body of baseball was formed: the Deutscher Baseball and Softball Verband (DBV).  The DBV encouraged membership at the club level and membership steadily ascended.  In 1989, there were 2000 registered players.  Today there are over 30,000 – the highest rate of participation among any European country.  The DBV also was a driving force behind the construction of world class facilities.  The stadium in Regensburg – where the 2013 World Baseball Classic’s 2nd qualifying round is taking place – is possibly the finest in all of Europe: 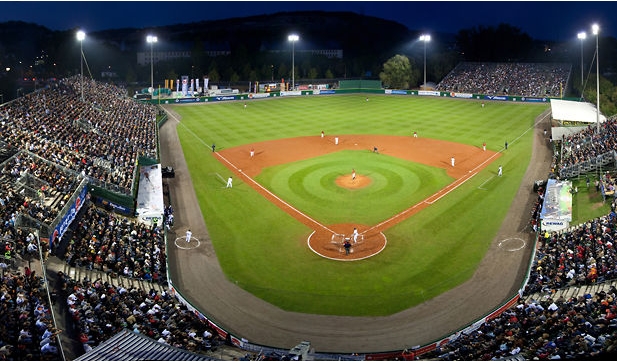 Germany’s domestic league – the Bundesliga – reformed in 1982 and continues to play to this day.  The league similar to those of Spain and France – teams are limited to three non-European imports.  After a 28-game regular season (7-8 teams per division), the first four teams in the North and the South make the playoff quarterfinals.  The teams finishing 5th through 8th play a reverse playoff within their own division to determine one or two teams to be relegated. The winners of the first round stay up, while the losers play each other in another series. The losing team of the second round is automatically relegated, while the winner plays a 3-game playoff against the 2nd-place team of Division 2.

The strongest team has undoubtedly been the Mannheim Tornados, who won eleven championships between 1982 and 1997. A few seasons later the Paderborn Untouchables started a dynasty of their own, winning six titles in seven years from 1999 to 2005. In recent years we have seen three different champions with Solingen Alligators (2006), Mainz Athletics (2007), Heidenheim Heideköpfe (2009) and Buchbinder Legionaere Regensburg in (2008 and 2010).  The winner of the Bundesliga goes on to represent Germany at the European championships. 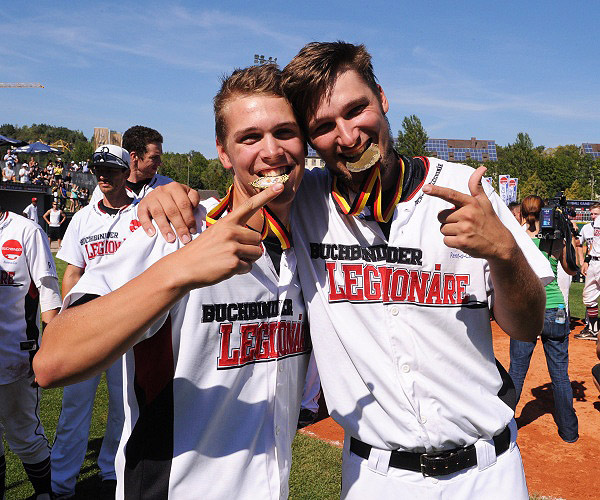 Today German baseball struggles to find its own identity, trying to search for a culture markedly different from American baseball.  Like almost every other nation in Europe, Germany identifies with soccer more than any other sport.  Yet the team no longer plays in front of empty stands – Germany played host to games in the 2009 World Cup and sold upwards of 11,000 tickets. The World Baseball Classic’s qualifying round will hopefully assist the Germans to carve a niche in baseball that they can call their own, with success being directly attributed to German players.  Germany has released it’s qualifying roster and 13 of the 28 players have been pulled from the Bundesliga.  Reinforcements from professional baseball include Toby Gardenhire (son of Twins manager Ron Gardenhire, who born on a U.S. base in Germany, thus making Toby eligible), Alex Burgos, Kai Gronauer, Donald Lutz, Max Kepler, Jake Shaffer, Markus Solbach, Daniel Thieben, Matt Weaver, and most notably former Major Leaguer Will Ohman.

If Germans can identify baseball as being “German” instead of “American” it will only serve to strengthen the game in this nation. They already have the brats and beers for it.