I originally wrote this post in February of 2007. In the 11 years that have passed, much has changed in regard to baseball in Mexico. I’ve edited and refreshed the original post to reflect a more contemporary view of Mexican baseball.

Mexico’s baseball roots can be traced back to approximately 1847. American soldiers in the Mexican-American War introduced Mexicans to the game of baseball in the various regions in which they were stationed. The laying of track for the railroad – specifically the Monterrey-Tampico railway – played a large part in the spread of baseball throughout the country, specifically northern Mexico. Colonel Joseph Robertson, who was from Tennessee and once served under General Robert E. Lee, introduced the game in Nuevo Leon when he granted his railroad workers a holiday on the fourth of July in 1889. Robertson and his workers celebrated American Independence Day by playing baseball.

The first organized Mexican League was formed in 1925 by Jorge Pasquel. Pasquel had Major League ambitions and stocked his teams with Negro League stars. Furthermore, Pasquel raided Major League players following World War II when returning soldiers created a surplus of skilled players. Most of these defector players (a total of 23) joined the Quebec Provincial League soon after and Pasquel had to fold the league due to financial insolvency in 1953. In 1955 the Mexican League resurfaced, this time as a Double-A level minor league.  The league reorganized yet again in 1967 as a Triple-A level league and continues to this day as the Liga Mexicana de Beisbol (LMB), also known as “The Mexican League.”

Attendance at professional baseball games in Mexico has been increasing steadily. In its heyday in 1979, the Mexican League drew 4.6 million fans. From 1998 – 2003, attendance fell flat, averaging approximately 2.3 million tickets sold each year as soccer ticket sales rose 27 per cent in the same period, to more than 4.9 million annually. As Mexicans became more affluent, they spent more on soccer than ever before. However, that trend is beginning to reverse. The Mexican League nearly matched their 1979 high, having sold slightly more than 4 million tickets in 2017, despite losing many dates to an extraordinarily active hurricane season. Total attendance has topped 3 million in all but one season since 2003. Although attendance numbers are healthy, at least half of Mexican League teams are bordering on bankruptcy and off-season franchise relocations are common.

Even though Mexico is home to one of the largest cities in the world – Mexico City – the largest market in the Mexican League belongs to Monterrey. Their home opener drew 30,000 fans and they average nearly 12,000 per game. Mexico City, a metropolis of 21 million people, has four pro soccer teams but only one baseball team: the Diablos Rojos (Red Devils). The team used to play in Foro Sol, a stadium wedged into a corner of the Hermanos Rodriguez race car track. It was less than ideal. The Diablos Rojos then moved to a temporary home, Estadio Fray Nano, while a sparkling new $60 million ballpark was being built for them. While it was set to open in 2017, construction delays due to a major earthquake have postponed its unveiling until 2019. The team currently draws an average of 4,000 fans to Fray Nano, a ballpark with a maximum capacity of 5,200 fans. Soccer remains the most popular sport in the nation’s capital.

Mexico City was once home to a second team, the Tigres, and their storied rivalry with the Diablos Rojos was much like that of the Yankees and Red Sox. Just as the rivalry between Celtic and Rangers in Scottish Football is known as the Old Firm, Mexicans have named the rivalry between Tigres and Diablos Rojos the Guerra Civil (Civil War). Sadly, the Tigres moved to Puebla soon after their home ballpark, Social Security Park, closed in 2001. The Tigres are currently based in Cancun, and have been quite successful the past few seasons – at least in the standings. The rivalry between Tigres and Diablos Rojos remains, although it’s not what it once was.

In addition to the Mexican League, Mexico has another Triple-A level league: the Liga Mexicana del Paci­fico (LMP), also known as the Mexican Pacific League. Unlike the LMB, the LMP is unaffiliated with Major League Baseball. While the Mexican League plays in the summer, the Mexican Pacific League is strictly a winter league. At the end of the season, the winner of the league’s playoff moves on to represent Mexico in the Caribbean Series.  The LMP has a total of eight clubs that play a 68 game regular season schedule beginning the second week of October and concluding in December. The rosters feature a mix of Mexican League veterans, minor league lifers, injury rehabbers, and a few top prospects.

The logos of the LMB and LMP

While the Mexican Soccer Federation has cultivated its sport nationwide, baseball remains a regional game. More than a quarter of the Mexican Baseball League’s 445 players come from one state, Sinaloa, with another 20 per cent coming from neighbouring Sonora. The Mexican Pacific League is based in these regions, and as a result are able to draw on the considerable talent and baseball-crazy fans. these regions produce While Mexican League teams struggle to attract 5,000 fans per game, the Mexican Pacific League has a robust average of 10,000 fans per game league-wide.

In addition to the LMB & LMP, there is an eight-team Northern League based in Sonora, a 10-team Veracruz Winter League, and smaller, independent leagues such as the Northwest League.

League roster limits: 28, with no more than eight imports. While American imports used to be the norm, many Cubans – having recently defected – are beginning to seek residency in Mexico. As a result, Cubans appear on rosters in greater numbers.

Playoff system: The season is split into two halves with teams awarded points for their standing at the end of each. The top six teams battle it out in three rounds, each round being a best-of-seven series. The winner goes on to represent Mexico at the Caribbean Series (and is also allowed to poach a substantial number of the best players from other teams as “reinforcements” for their roster).

As previously mentioned, the Tigres de Quintana Roo have been in Cancun since 2007 after having moved from Angelopolis. Cancun has already had one team fail (the Lobstermen in 2005) but the Tigres have been able to hang on for more than 10 years now, having won championships in 2011, 2013, and 2015. In spite of their success on the field, the team has consistently struggled at the gate. Former Major League pitcher Fernando Valenzuela purchased the team in 2017, but has not yet been able to increase attendance. 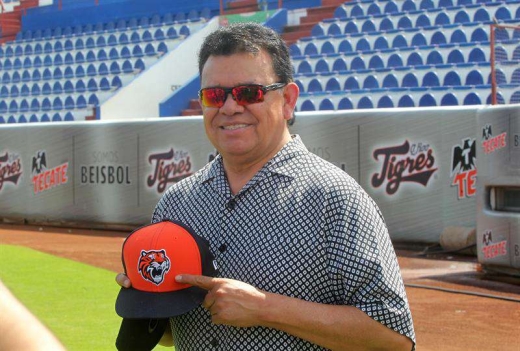 Fernando Valenzuela poses with the hat of the Quintana Roo Tigres

I attended a Quintana Roo Tigres game not long after their initial move to Cancun in 2007. My review of the experience can be found here. It was really quite a lot of fun. The current manager of the Tigres is none other than former Toronto Blue Jays manager Tim Johnson, who parlayed a successful stint in lower-level Mexican baseball to the top job of the second-most successful franchise in Mexico. 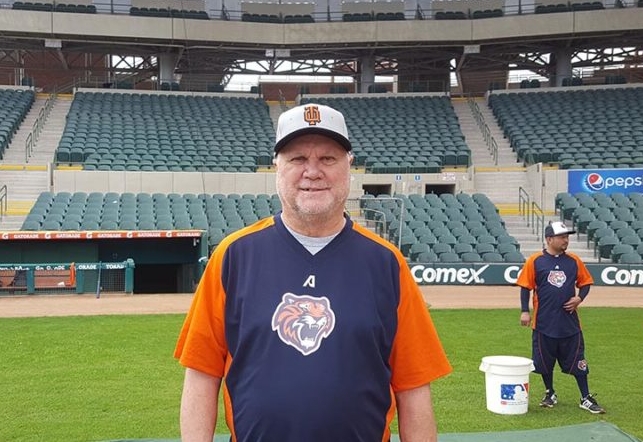 There are currently 10 Mexican-born players on Major League rosters, including the Toronto Blue Jays’ very own Roberto Osuna and Jaime Garcia. Although there are no Mexican-born players in the Baseball Hall of Fame, Hector Espino and Beto “Bobby” Avila are notable players from the past.

One other noteworthy item: the Mexican League is home to one of the prettiest ballparks in all of minor league baseball. Home to the Oaxaca Guerreros, Eduardo Vasconcelos Stadium opened in 1950 as the sports field for the local university. It has since been renovated. It’s not much to look at from the outside, but inside it is an absolute jewel, with views of the surrounding valleys and green mountains (I might be too generous in calling them that, but here we are). The stadium played host to the league’s All-Star Game in 2013. Our friend Craig Robinson of Flip Flop Fly Ball was in attendance and offered a review of the game.

Want to know more? For the best Mexican baseball coverage in English, make sure to check out Bruce Baskin’s excellent blog, Baseball Mexico. 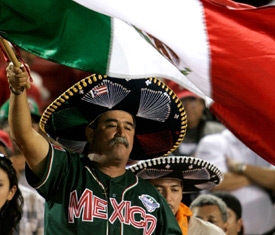