In the summer of 2009, I did what many Canadians do when they experience a quarter-life crisis:  I went backpacking through Europe.  With plans to travel through the Netherlands, France, Spain and Italy, I did not anticipate encountering baseball in any way, shape or form.  I was quite surprised to stumble upon a game being played in Valencia, Spain (featuring CBS Antorcha) while on the way to the beach.  The game I saw in Spain, although not played at a high level, piqued my interest in the Spanish game.  With Spain being included in the qualifying round for the 2013 World Baseball Classic, the way the game of baseball is played in the Iberian peninsula is more relevant now than ever.

With Spain having colonized Latin America – a bona-fide baseball hotbed – I was interested to know how the game was played in the parent country.  I returned to Spain this summer to see what I could learn.

When considering baseball’s history in Spain, it’s a small miracle the game is played at all in the country.  In the late nineteenth century, Spain actually banned the game of baseball altogether.  Cuba, a valuable Spanish colony, was laying the groundwork to become an independent nation.  Spain was struggling to retain control and sought to quell all rebellious activities.  From Cuban Baseball:

The first Cuban War of Independence against its Spanish rulers spurred Spanish authorities in 1869 to ban playing the sport in Cuba.  Cubans began to prefer baseball to viewing bullfights, which Cubans were expected to dutifully attend as homage to their Spanish rulers in an informal cultural mandate. As such, baseball became symbolic of freedom and egalitarianism to the Cuban people.

Roberto Echevarria, a Cuban-born academic specializing in Latin American culture, wrote about this tension in his book The Pride of Havana: A History of Cuban Baseball. Echevarria writes, “Baseball was a sport played in defiance of the Spanish authorities, who viewed this American invention as vaguely secessionist and dangerously violent because of the use of sticks.”  Baseball was not a sport played by elitists; blue-collar workers and students were the ones who had a passion for the game.  It was these same people who were dissidents and revolutionaries; they sought Cuban independence.  It was labelled ‘a rebel game.’

Of course, we know that it is human nature to do the opposite of what we are told to do.  The ban on baseball only served to spur the popularity of the game.  It became celebrated, eventually becoming Cuba’s national sport.

In Spain, however, baseball didn’t gain traction until the mid-1940s. The descendents of Cuban immigrants in Spain began to spread the game across the country, and in 1944 Spain’s football clubs took notice. Spanish sports clubs are known for fielding teams in many sports; when baseball became organized these clubs jumped on board.  Real Madrid, FC Barcelona, Atletico de Madrid and RCD Espanyol all added baseball teams to their fold. 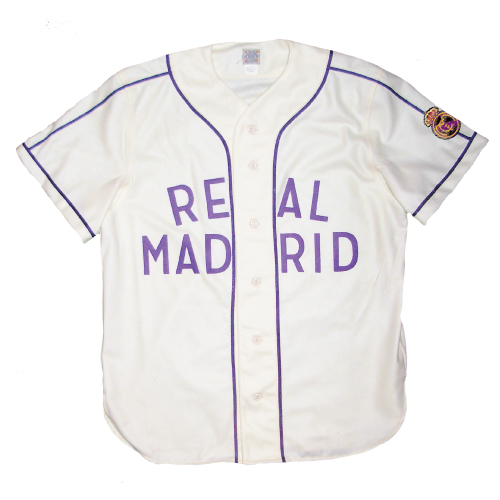 The Spanish team established a rivalry with Italy, also known as the Azzurra.  The Spaniards were dubbed the Furie Rosse or “Red Furies” by the Italians – a nod to the Spanish national soccer team’s nickname “The Red Fury.”  At the first European Baseball Championships in 1954, the Italians beat Spain in the finals by a score of 7-4.  Spain committed eight errors.  However, the following season, Spain tied Italy 0-0 and won their other three games to advance to the final.  Facing Belgium in the championship game, Spain won 2-0 in front of a hometown crowd of 3,000.  As European Champions, Spain was invited to the inaugural Global World Series.  Since 1955, Spain has failed to win another European Championship, although it has captured the bronze medal 11 times.  With the exception of Belgium in 1967, either the Italians or Dutch have won the gold in every year since.

Spain has had better success playing in the European Cup, Europe’s answer to the Caribbean Series.  The team that wins Spain’s domestic baseball league championship earns the right to represent Spain at the European Cup.  Like the Caribbean Series, these domestic teams are permitted to use import players, thus allowing the Spanish team to recruit talent from abroad.  Spain won four of the first six European Cups, but hasn’t medalled since 1978.  The reason is that the Dutch and Italians have been far more aggressive in recruiting American coaches and instructors.  In addition, in-fighting among Spain’s domestic baseball federation has slowed any progress. 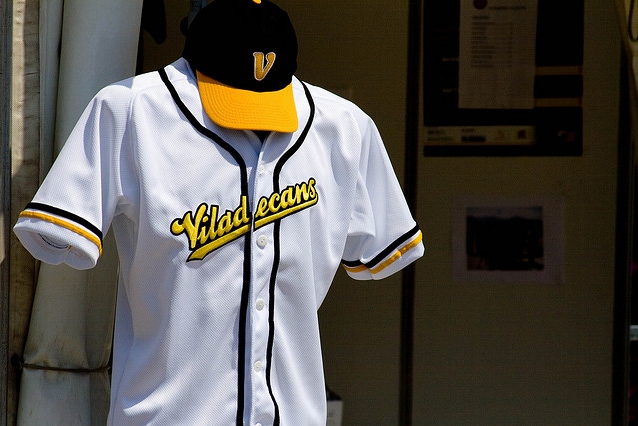 Of all of the teams, baseball is most popular in Viladecans.  A Barcelona suburb of 60,000 people, the Viladecans club has won every league championship from 1981-2002.  Now THAT is a baseball dynasty.  They did it the old fashioned way – by being one of the first Spanish teams to develop their own players.  John Kernaghan of the Hamilton Spectator wrote during the Barcelona Olympics in 1992 that “It’s difficult to find anyone in this town (Viladecans) who isn’t touched by the game, either as a player, official or fan, making it the largest pocket of béisbol aficionados in Spain.” 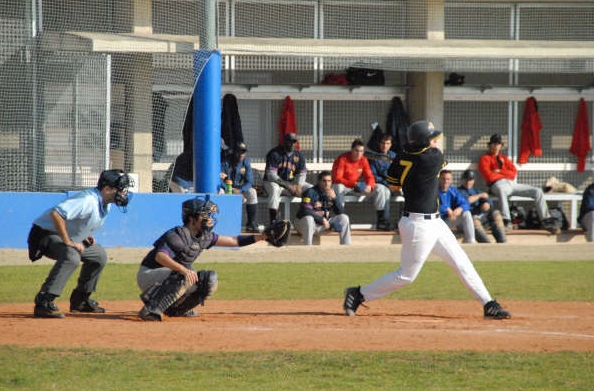 Viladecans has the largest stadium in the Division de Honor circuit, with a capacity of 2,000.  Estadi Olimpic de Valdecans it is called, according to the Real Federacion Española de Beisbol, was used as  one of the official sites for Baseball during the 1992 Barcelona Summer Olympics.  I tried to find it – unfortunately I could not.  It is near impossible to find an address for the stadium, and my Garmin GPS could not (or refused?) to find anything related to Estadi, Olimpic, or Beisbol in Viladecans.  In any event, I’ve been able to find it after the fact on Google Maps. Apparently it is more commonly known as Camp de Beisbol de Viladecans. I have a feeling that the stadium has fallen into disrepair in the 20 years since it hosted the Summer Games.  As well, having looked at the ballpark on Google Maps, I have no idea where there is space for 2,000 fans. Here’s a few shots of the ballpark, also known as Estadio Municipal de Béisbol de Viladecans: 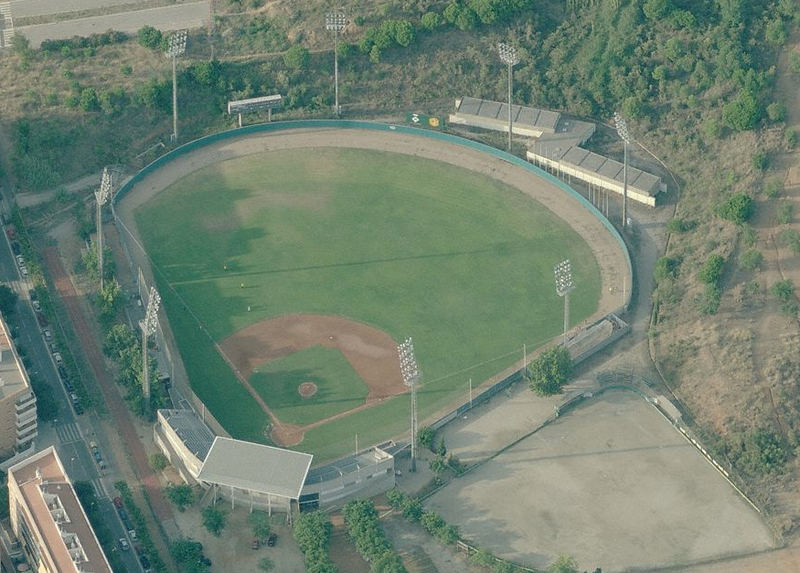 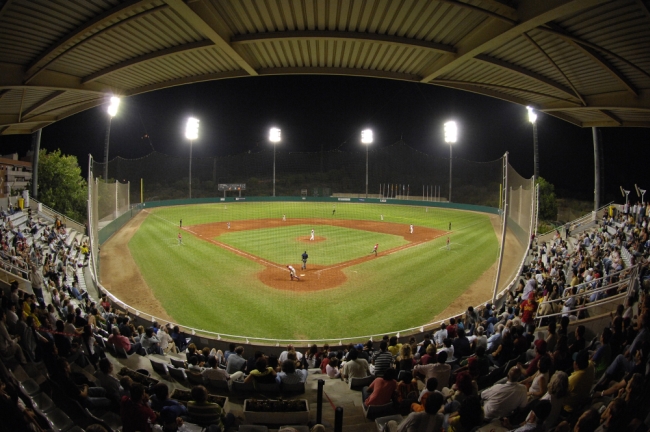 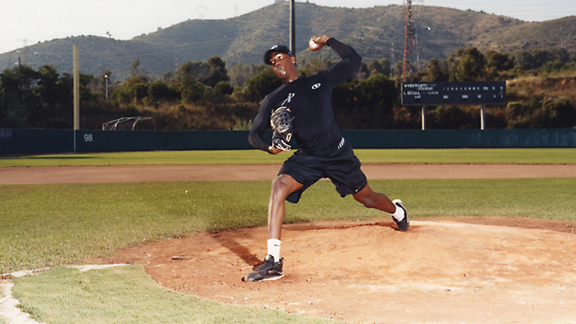 There is another stadium that hosted the Barcelona Olympics, however, it no longer exists as a baseball venue.  According to Josh Chetwynd in his book Baseball in Europe, “For some Spanish baseball observers, there was a lot of disappointment that the 1992 Olympic Games did not lead to a bigger spur in baseball interest.”   The best stadium used in the Olympics, Estadi L’Hospitalet de Llobregat, was originally a 2,500 seat baseball venue that expanded into a 7,000 seat venue for the Games.  At the conclusion of the Olympics, with baseball interest waning, the ballpark was converted to a soccer stadium.  In fact, a local baseball club plays on a dirt field in the shadow of that former facility.

This season’s league champion (and last season, for that matter), FC Barcelona (aka Béisbol Barcelona), play out of the easy to find and very picturesque Campo Municipal Carlos Perez de Rozas.  Situated on top of a 200-metre high hill in the Montjuic neighbourhood of Barcelona, the ballpark hosted games for the 1992 Olympic Games as well as the first round of the 2009 Baseball World Cup. 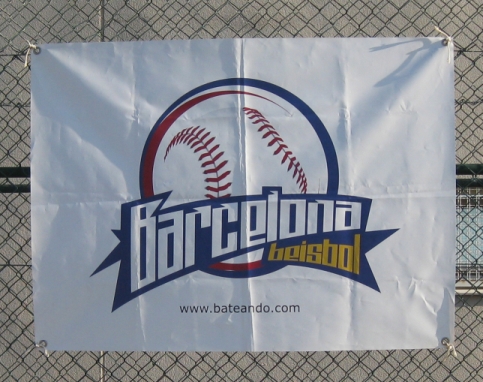 I arrived at the ballpark in time to watch the defending champions practice:

Here are the highlights from a game between 1st-place Sant Boi and hometown Barcelona, courtesy of Club Béisbol Barcelona:

The ballpark offers stunning views of Barcelona as well as the Castell de Montjuic.  The fortress largely dates from the 17th century.  It served as a prison, often holding political prisoners, and was the site of executions of anarchist supporters in 1897. 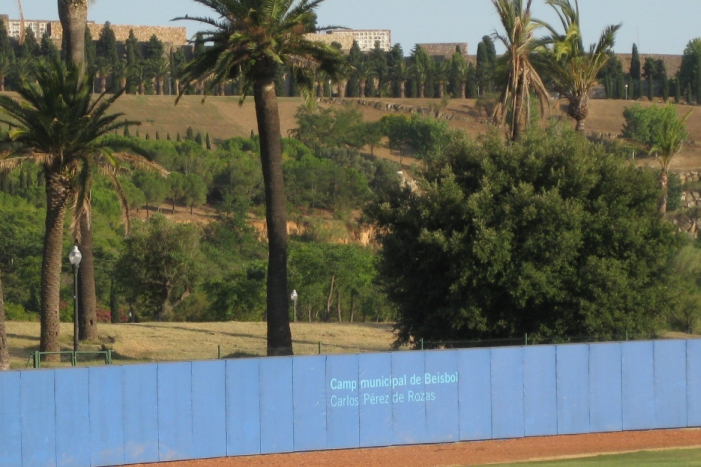 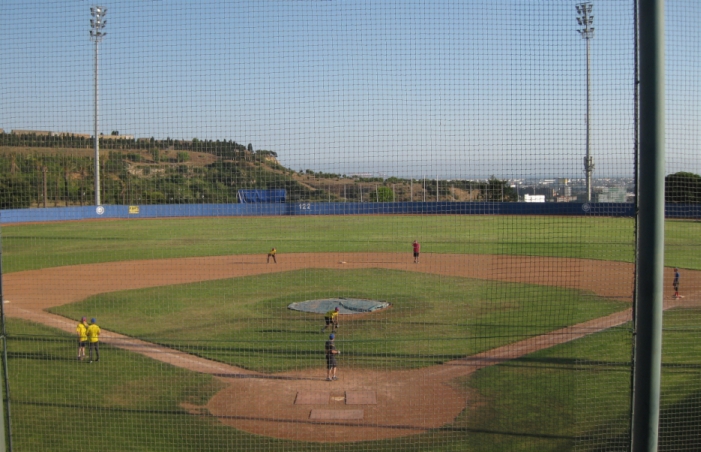 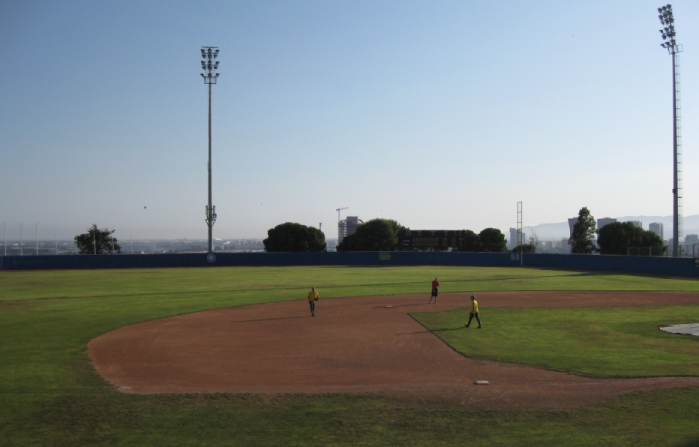 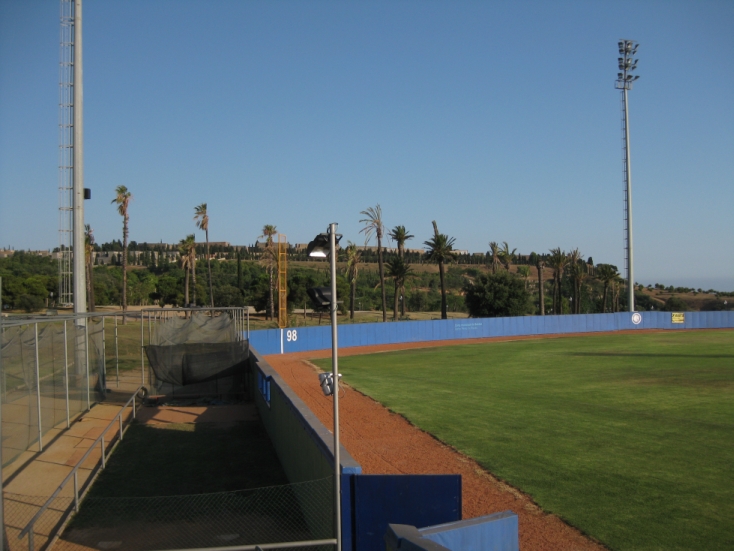 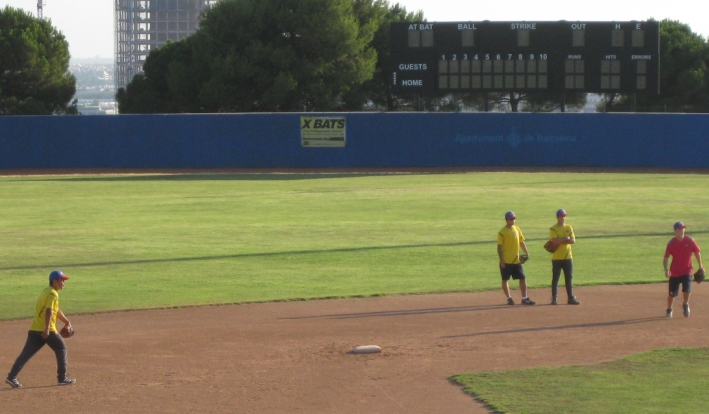 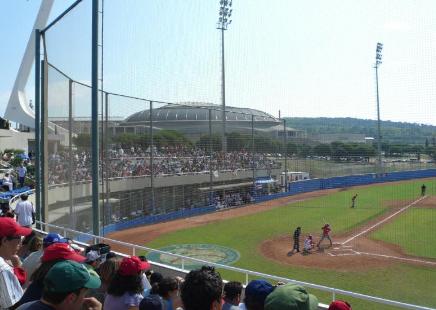 In my limited experience of having watched a Primera Division game in Valencia and watching FC Barcelona practice, my feeling is that Spanish baseball is played at a level comparable to NCAA Division II.  Like Cuba, the pitching in Spain trails the hitting by a fair margin.  This is likely due to the fact there exists a dearth of competent pitching coaches.

Today, Spanish baseball remains where it has always been: also-rans to the Netherlands and Italy.  In spite of a movement to aggressively recruit international coaches (such as St. Boi manager, Cuban Francisco Despaigne) the main obstacle to Spanish baseball success remains the influx of import players – especially from Latin America.  Any club that competes for the championship in the Spanish Elite League relies on key import players.  Many of these immigrant players become citizens of Spain and thus, “Spanish players.”  The national team now features players born in both Cuba and Venezuela.  With all of these import players, there is no incentive for Spain to establish a sustainable developmental program at the grassroots level.  It is ironic that Viladecans’  competitive advantage from 1981-2002 – the development of home-grown talent – is now the reason that they no longer compete for the league title.  They do not recruit foreign-born players and have failed to adapt to the changing Spanish baseball landscape.

On a positive note, Spain’s current baseball administration is doing what it can to increase the country’s baseball profile.  The country hosted the 2007 European Baseball Championships, garnering national television coverage.  Most importantly, Spain has been chosen as one of the 16 teams to play in the qualifying tournament for Major League Baseball’s 2013 World Baseball Classic.  Spain will play in a pool with France, Israel and South Africa.  The games are scheduled to be played in November 2012 in Jupiter, Florida.  From an MLB press release:

The Qualifiers will feature a six-game modified double-elimination format. The composition of the pools was determined after venues were selected, with consideration given to competitive balance, existing rivalries and each national team’s geographical location.

“The implementation of this qualification system into the World Baseball Classic framework is a true sign of the strong collaboration between the IBAF and our colleagues at Major League Baseball and the Major League Baseball Players Association,” said Riccardo Fraccari, President of the International Baseball Federation. “We are very encouraged about the inclusion of emerging baseball territories and the continual growth of the international baseball landscape that this represents.”

The Qualifiers will expand the competitive field from 16 to 28 countries. The teams invited to participate in the Qualifying Pools will include the four World Baseball Classic teams from 2009 that did not win a game – Canada, Chinese Taipei, Panama and South Africa.

The winners from each Qualifying Pool will advance to the World Baseball Classic tournament, scheduled for March 2013.  Those four teams will join the 12 countries – Australia, China, Cuba, Dominican Republic, Italy, Japan, Korea, Mexico, Kingdom of the Netherlands, Puerto Rico, United States and Venezuela – that receive automatic invitations based on their performance in the 2009 tournament.

Spain won a thrilling final game against Israel to advance from the qualifying pool to the first round of the World Baseball Classic.

Indeed, Spain made it to the Classic for the first time in the tournament’s history. After missing a chance to qualify in 2006 and ’09, Spain overcame a lack of time to prepare and a stacked Israel team and played its way into the Classic field. 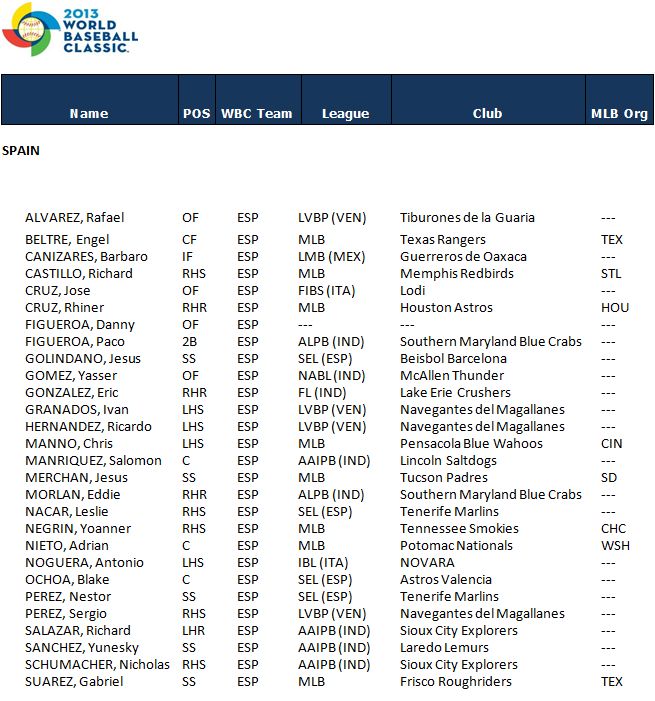 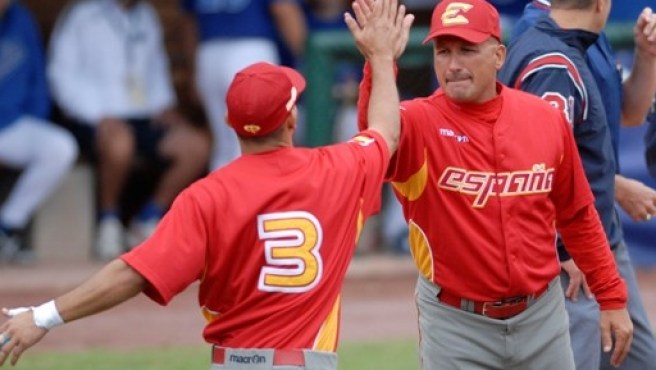 Photo courtesy of the Associated Press