Continuing our review of 2011 Baseball Video Games, Baseball Mogul 2012 is an addicting baseball simulator for the PC.

Once the game starts up you can choose from a number of options. Play as a modern day team, play in a fictional world, start as an expansion team during the actual time period (including an expansion draft) or start a franchise in any historical year from 1901 and on. For my two sims I choose the 2011 Toronto Blue Jays and the 1916 NY Giants. Franchises are ongoing and can run for decades.

Most MLB teams include a 60+ man MLB roster, including all the current players and a deep minor league system. An active online community produces free up to date rosters (slightly outdated rosters come pre-packaged with the game). The following is a screen cap from early May rosters (Houston GM is the author). As Jays fans can clearly see, the roster is pretty advanced. There are even more available players deeper in the system (Travis D, Hech, etc) that don’t show up on this depth chart.

As GM/Owner you will set your roster at all levels, make any trades, contracts, set lineups, etc etc. Most real life GM options are included in the game. Stats include standard stats (HR, RBI), WAR, GB%, Defensive metrics, etc.

Mogul focusses primarily on on-field franchise success. Some day-to-day operations do exist, such as ticket prices, TV contracts, building of stadiums, setting concession prices, etc. These are tightly focussed and typically do not get in the way of the baseball sim portions of the game.

The game does not include a large revenue sharing slant like the real MLB does. This makes it difficult to compete over the long-term with teams like the Marlins or Pirates. What the game does have is pre-set calculations for attendance set by city, fan loyalty, demographics and income levels. This, along with TV contracts & concessions brings in team revenue. You can spend revenue in four main ways. On your roster, on scouting, on medical staff and on farm system. More $$$ spent on scouting gives you more accurate player ratings, farm system expenditures increase your chances at improving a players attribute points, a good medical team can keep your team healthy.

Simulate by day, week, month, season or multiple seasons. Set stop points for injuries, trade offers, tight game conditions, etc. This is all done quickly on the fly by the program.

Similar to simulators found in console games, Mogul includes a simplistic in-game simulator for each and every game of your franchise. Choose options such as hit, bunt, hit & run, steal on the hitting side, along with pitch to, pitch around, defensive alignments, etc on the pitching end. There are more options, these are just a few of the easier options. The simulation does a decent job and is a nice change of pace from straight week/month full computer sim. 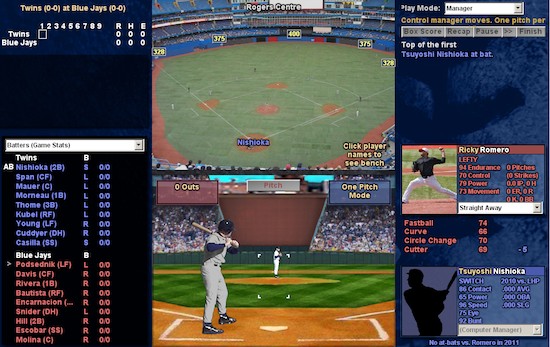 Trades – Trade offers can be made in-season (within the deadline) and during the off-season. Occasionally the computer will offer a deal. The other times you can either directly offer for a player(s) or put someone on your roster on the block, receiving a litany of offers from around the league. The difficulty can be set at different intervals, making it easier or more difficult to pull off a deal.

Contracts – Sign players coming off arbitration to long-term deals (with club or player options), or re-up soon to be free agents. If you can’t reach a contract with an arb player the computer chooses between the two salary bids, just like an MLB tribunal.

Free Agency – At the end of a season a number of free agents become available. An interesting addition to this years game is counter bids. For example, during a 1916 sim I attempted to sign Eddie Cicotte to my NY Giants. Cicotte’s contract ‘ask’ was 5 years at $26K. I put in my offer and right away I had competition from the Red Sox. The ‘Sox pushed bidding up to $35K per season, where I eventually tapped out.

MLB Draft – The draft is simplified in Mogul. It consists of 6 rounds, all players are pre-scouted and all drafted players start at MLB minimum contracts. Some prefer this method when playing multiple seasons, others will prefer the more realistic 50 round draft that can be found in OOTP.

Baseball Mogul is an advanced simluation, not a full on micro management game. And it can be addicting. Very addicting. The game does a good job in simplifying some of the more tedious tasks and emphasizing the team/player stat simulation aspect of the game. It’s a huge step up over the sims that are added on console games and is generally a very fun experience for the stat obbssed baseball fan.

If you’re interested in the game you can visit http://www.sportsmogul.com/games/baseball2k12.html to download a free one-season trial of the game. Let us know what you think of the game via the comments section.