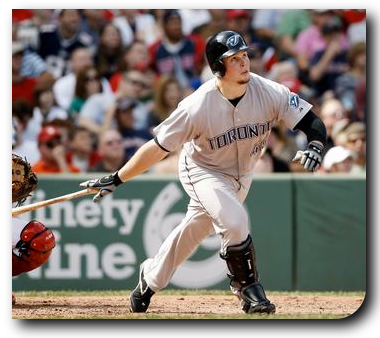 Am I grasping at straws? Why the hell not? The Toronto Blue Jays were officially eliminated from the playoffs last night. No Playoffs!!!1 this season. With that said I’d like to see the Jays go the extra mile in developing Travis Snider.

I grabbed the following quote yesterday off of ESPN.

“We’ve got two impact players who have pretty much emerged, in [Aaron] Hill and [Adam] Lind, and they’ll probably be our No. 3 and No. 4 hitters going forward,” said Jays general manager J.P. Ricciardi.

That’s great J.P.! ‘Going forward’. Might as well wait until 2010 to move them back. We don’t want to take away plate appearances from Vernon or Millar.

Let’s pretend for a second that this organization knows what it’s doing. Let’s move Travis Snider into the #2 spot vs righties.

Hitting second will hopefully force Snider to work counts and be more selective, something that this high K/BB ratio player needs to work on. This reminds me of Keith Law’s boy, Troy Tulowitski.

The Colorado Rockies made Troy Tulowitski bat leadoff during portions of his minor league career. The front office admitted that they did not do this because they had aspirations that Tulo would be a leadoff hitter in the MLB. They did it to force Tulo to work counts and to help eliminate bad habits. Tulo’s far from Albert Pujols when it comes to plate discipline but it has improved as his MLB career has gone on with no power drop-off (comparing healthy 2009 to 2007).

With the playoffs and any realistic hope at .500 being laughable, let’s use the remaining portion of the season to develop one of our future stars. What do we have to lose? Games? Attendance?