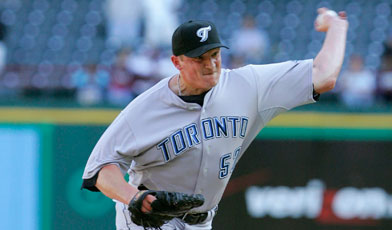 Today I’m going to look at Pitch F/X, with all apologizes in advance to John Hale over at the great Mockingbird. With the great tools offered by Brooks Baseball its just too easy to access Pitch F/X data these days. All charts, etc from Brooks Baseball.

Moving on, let’s take a look at B.J. Ryan from last night. As we all know, Ryan’s velocity was reportedly down this spring.

An average speed of 88 MPH is far better than the news coming out of spring camp. Slider in at an average of 81 MPH.

To cross-reference this lets take a look at a random 2008 appearence. I choose August 11th. On this day Ryan threw one inning of scoreless ball with one K.

Last season Ryan had velocity of 88 MPH. Hmm. I do have to consede that his fastball did have a little more rise. On this date his slider clocked in at 82. His slider does appear strong in terms of velocity in 2008, although at four pitches in each outing it is a small sample size.

I would have to say that Ryan’s release point was actually tighter last night then back on August 11th. 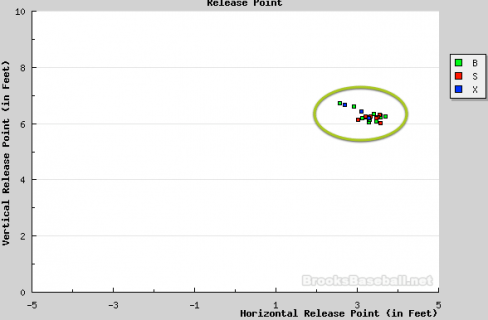 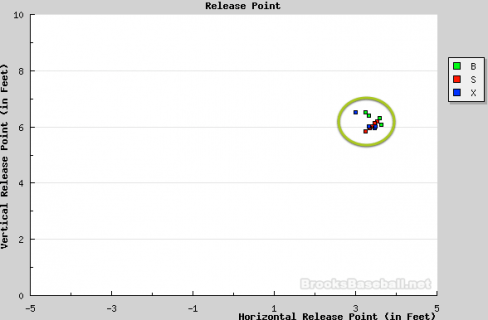 Judging by this I feel that the doom & gloom scenarios are a little much. Whether B.J. can return to the type of pitcher he was back in 2005 remains to be seen. But I don’t think we’ll see too much of an overall deviation from his 2008 numbers.

Tonight Callum will be livebloging the Rays vs the Red Sox at 7pm. Out of the house? Check it out on your cell. At home just simply log on for some poignant in-game analysis. Visit: http://liveblogs.thescore.com/