This past weekend I attended the Toronto Blue Jays’ home opener, eagerly anticipating Dustin McGowan’s first start since 2011. I’ve always been a fan of McGowan’s wipeout slider. In fact, I’ve always been fascinated with the pitch itself  (perhaps it’s because I could never throw one in my limited playing career – I think my hands are too small). I’ve fawned over Dave Stieb’s slider and wondered aloud how Dave Stieb’s slider stacks up against Steve Carlton’s. Could McGowan have the next great Blue Jay slider? Those thoughts quickly passed as McGowan was roughed up by the Yankees early on. McGowan was tipping his pitches, so the Yankees knew the slider was coming and thus rendered the pitch ineffective.  My thoughts then began to drift as they sometimes do when Blue Jays pitchers get shellacked. Who has the best slider in this history of Major League Baseball? Though I never saw him play, I’m willing to bet it was Bob Gibson.

I’ve written about Bob Gibson before here. In my mind, he’s put up the greatest single-season pitching performance in the history of baseball. He was a tremendous competitor and was incredibly fun to watch pitch. Those who saw him play will always remember they way he violently flew off the first-base side of the mound at the end of his delivery. Not only was he a colourful pitcher but he was a colourful personality. As Joe Posnanski wrote, “children whose fathers are not old enough to have seen him pitch, still come up to Gibson to say he’s their favorite pitcher, not because of his 3,117 career strikeouts or his 1.12 ERA in 1968 or his unrelenting brilliance in the World Series. No, it’s because he was mean, tough, a symbol of badass.” 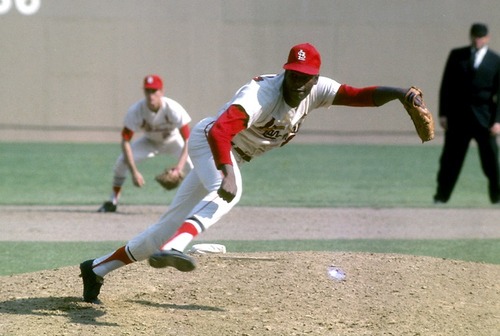 I’ve compiled here a few quotes, stories, and anecdotes on the legend that is Bob Gibson. I hope you enjoy.

Hank Aaron on Bob Gibson
“(Hank Aaron told me) ‘Don’t dig in against Bob Gibson, he’ll knock you down. He’d knock down his own grandmother if she dared to challenge him. Don’t stare at him, don’t smile at him, don’t talk to him. He doesn’t like it. If you happen to hit a home run, don’t run too slow, don’t run too fast. If you happen to want to celebrate, get in the tunnel first. And if he hits you, don’t charge the mound, because he’s a Gold Glove boxer.’ I’m like, ‘Damn, what about my 17-game hitting streak?’ That was the night it ended.”
—Dusty Baker

Dick Allen on Bob Gibson
“Gibson was so mean, he’d knock you down and then meet you at home plate to see if you wanted to make something of it.”
—Dick Allen

Jim Ray Hart on Bob Gibson
“Between games, (Willie) Mays came over to me and said, ‘Now, in the second game, you’re going up against Bob Gibson.’ I only half-listened to what he was saying, figuring it didn’t make much difference. So I walked up to the plate the first time and started digging a little hole with my back foot…No sooner did I start digging that hole than I hear Willie screaming from the dugout: ‘Noooooo!’ Well, the first pitch came inside. No harm done, though. So I dug in again. The next thing I knew, there was a loud crack and my left shoulder was broken. I should have listened to Willie.”
—Jim Ray Hart

Pete Rose on Bob Gibson
“I’m in the league two weeks, playing in St. Louis. [Bob] Gibson hits a double, I’m playing second base. I go over and say, ‘What’d you hit, Gibby, a fastball?’ And he stood there like this, not moving, not saying anything. So maybe I didn’t say it loud enough. ‘What’d you hit, Gibby, a fastball?’ Nothing. Now the inning’s over, my manager’s Fred Hutchinson, I went over and said, ‘Hey, skipper, let me ask you a question.’ He said, ‘What do you want, rook?’ I said, ‘Is Bob Gibson a deaf mute?’ He said, ‘Why?’ I said, ‘I asked him what he hit, and he won’t talk to me.’ He said, ‘No, he don’t talk to the opposition.’ So the next day I’m out there early hanging on to the cage watching Groat and Boyer and Musial and Julian Javier. And Gibson comes out of the dugout. In those days there wasn’t fraternizing, and I’m watching batting practice. And he walks by me and says, ‘It was a slider, rook.’ It took him 24 f–king hours, but he talked to me!”
—Pete Rose

Tim McCarver and Bob Gibson
Tim McCarver once went to the mound when Bob Gibson was pitching and was quickly told to return. “The only thing you know about pitching is that you can’t hit it.”

Doug Harvey on Bob Gibson
“Barry Bonds? I’ll tell you what, if he hit a home run off Gibson or (Don) Drysdale and stood and admired it, they’d knock that earring out of his ear the next time up.” – National League Umpire Doug Harvey 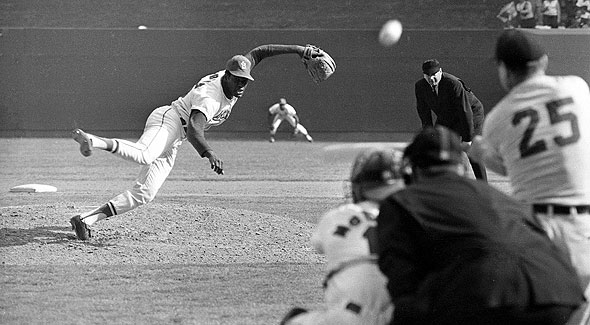 Pete LaCock on battling Bob Gibson
“Billy Williams had broken his ankle, so the team was looking for a left-handed hitter. I had been hitting the ball pretty well, so they brought me up from Double-A. I was 19 years old. The game was in Chicago, and Bob Gibson was pitching for the Cardinals.

“It was 3-2, bottom of the ninth, and we had runners on second and third with two outs. Our pitcher was due up and Don Kessinger was the next hitter. He wasn’t a very good left-handed hitter — he was a better right-handed hitter — and Gibson had already struck him out a few times.

“I figured they were going to walk me. My run didn’t mean anything and putting me on meant they could get an out an any base. They had a meeting on the mound and somebody said, ‘Does anybody know this guy?’ Gibson said, ‘If they’re bringing in a rookie, I’m pitching to him.’ Ted Simmons was the catcher, and he told me this. When he comes back behind the plate, he goes, ‘They’re going to pitch to you, kid.’ I said, ‘Great.’

“First pitch, base hit, game over. I’m out there giving high fives.

“About three weeks later we go to St. Louis. I’m hitting third and Gibson is pitching again. I’m looking for my bats and all they’re gone. I was panicking. Billy Williams is sitting there with a cast on his ankle and he’s got them. He goes, ‘Pete, there are two outs and nobody on. You’ll make baseball history. Go to the plate without a bat and just stand there.’ I said, ‘You’re crazy, man. Just give me the bat.’ He said, ‘Gibson is going to hit you.’ I said, ‘No he‘s not. He forgot about it.’

“First pitch, Wham! He nailed me.

“Next time up, I’m thinking he figures I’m going to be scared, but I’m not. I’m just looking for a pitch to hit. Well, he gets me about two inches below where he hit me the first time.

“[In 1975], they had a Bob Gibson Day, in St. Louis. They gave him a big parade, a motor home, a bust of his head. The whole nine yards. He didn’t start that game — he was pitching out of the bullpen at the time — but in a 6-6 tie, they started warming him up.

“The bases were loaded with nobody out. Gibson comes in. First guy pops up, second guy strikes out. I’m the next hitter. The count runs to 3-2 and I hit a grand slam home run to beat him. It was the last pitch he ever threw.

“He comes off the mound and is calling me everything you can imagine. He’s following me around the bases, and by the time I get to third, I’m almost walking. I thought we were going to fight. I had charged the mound against him before. Twice, actually.

“The surface was Astroturf, and my home run hit the mezzanine and rolled back to the infield. Ted Sizemore was the second baseman, and he got the ball and flipped it over to Gibson. As I was walking into to the dugout, he threw it at me.

“About 15 years later, we’re doing an old-timer’s game in Royals Stadium. Bob Feller is pitching. I walk up to hit, and when I get up to the plate, Gibson comes out of the dugout. He goes to the mound and starts warming up. I’m wondering what in the Sam Hill? First pitch, he drills me.

“I ended up coaching with the Cardinals. Buddy Bates was the clubhouse guy, and when I go into the coaches room, I see that I’m lockering right next to Gibson. I’m going, ‘Buddy, this ain’t going to work.’ He’s saying, `Yeah, yeah, this is going to be good.’ The whole time I was there, I don’t think Gibson said one word to me.

“Anyway, the first time I charged him, I didn’t get halfway there. Ted Simmons jumped on my back. I ended up on the bottom of the pile and got my ass kicked. The other time, I figured I’d walk half way to first, then take a left. I started to, but Shag Crawford — he was the umpire — was right behind me. He knew I was planning to go after him. I knew [Gibson’s reputation] but in baseball you get brave and you get stupid.”

Dusty Baker on Bob Gibson
One night Dusty Baker saw Gibson eating in a restaurant. His teammates encouraged him to walk over and say hello. “It’s OK,” they told him. “It’s away from the field. This is a good time. Bob will be happy to talk.” Then, while those teammates snickered, Baker and his wife walked over and, Dusty said, “Excuse me, Mr. Gibson.”

And Gibson looked up and without even a hint of a smile he snarled, “Why the *$*#&$* should I talk to you?” Then he looked past Dusty, to his wife, and said, “It’s very nice to meet you Mrs. Baker.”

Bob Gibson on Bob Gibson
“Have you ever thrown a ball 100 miles an hour? Everything hurts. Even your ass hurts. I see pictures of my face and say, ‘Holy shit’, but that’s the strain you feel when you throw. I had one of those faces you look at it, man, and say, ‘Man he’s an ass-hole.’ Could be, depends on if you pissed me off or not.”

“When I knocked a guy down, there was no second part to the story.”

“I’ve played a couple of hundred games of tic-tac-toe with my little daughter and she hasn’t beaten me yet. I’ve always had to win. I’ve got to win.” Source: The Summer Game by Roger Angell

One of the most common trivia questions asked is what Major League pitcher used to play basketball for the Harlem Globe Trotters. The answer — of course — is Bob Gibson, who played for them from 1957 through 1958 and was a former Creighton University basketball all-star.