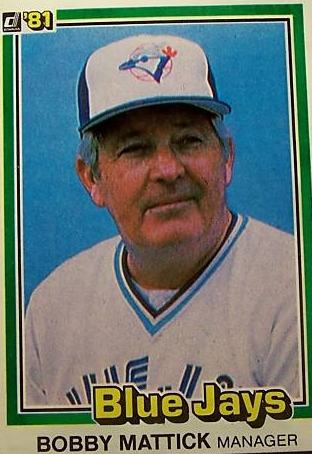 “Bobby Mattick was the senior statesman of the Blue Jays family since day one.”

Bobby Mattick was a major league shortstop, manager and scout, most notable for managing the Toronto Blue Jays at the beginning of the 1980’s.  Mattick began his baseball career with the Chicago Cubs in 1939 and then moved to the Cincinatti Reds before his final season in 1942. Hampered in 1936 by a foul ball which cracked the orbital bone of his right eye and caused double vision, he was still able to tough out a .233 average  with no home runs and 64 RBIs in 206 games. He then got his feet wet managing teams in the Southern League in 1944 and 1945. 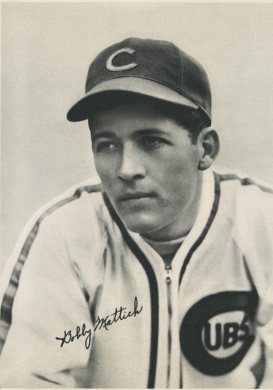 Longtime Yankees executive Gabe Paul told a story of how in 1961, he and Mattick watched a young Cubs prospect drop five fly balls in centre field.

“Bobby still insisted we should see if we could get the kid,” the late Paul recalled. “We did try but we didn’t succeed. Bobby’s judgement was vindicated, though. The kid was Lou Brock.”

Bobby Mattick was one of the Toronto Blue Jays original employees, joining the team in 1976 as scouting supervisor.  His input was integral in helping to draft the expansion Blue Jays.  Two seasons later he was promoted to Director of Player Development.  As head of the Blue Jays scouting activities, Mattick is credited with signing players such as:
Dave Stieb, Jesse Barfield, Jim Clancy, Alfredo Griffin, Lloyd Moseby, Willie Upshaw, Ernie Whitt,  Damaso Garcia, Barry Bonnell and Luis Leal. 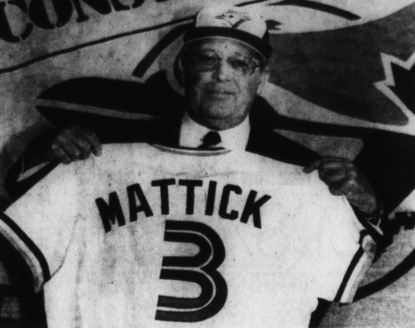 1980 saw Mattick jump at the chance to take over the role of manager, becoming the oldest rookie manager to start a season at 64.

“I figured if I waited another two or three years, I would be too old.”

Mattick’s first task was to rebuild morale on a club that lost 100 or more games in each of its three seasons. He assembled a coaching complement that consisted of pitching coach Al Widmar, first base coach Denis Menke, third base coach Jimy Williams, bullpen coach John Feiske and batting instructor Bobby Doerr

“It is time for us to start winning ball games.  I think the main thing we have to reestablish is pride.”

Mattick’s first season as manager was the first in which the team lost fewer than 100 games (they went 67-95).  Most importantly, Bobby Mattick was doing exactly the role for which he had been hired: he was teaching the heart of the future Blue Jays contending teams to play the game at the major league level. 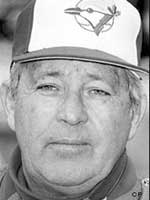 By the time Mattick was finished, his players knew how to play the game right by being relentlessly schooled in the fundementals of the game by the best teacher in baseball.

“I don’t know where this organization would be without him,” Paul Beeston once said of Mattick. I’ll tell you this, they would not have been the team of the decade (’83-’93). No chance.”

Following the 1981 season and a 104-164 career record during his two-year tenure as manager, he continued to work in the Jays’ organization as executive co-ordinator of baseball operations before his promotion to vice president of baseball in 1984. Mattick played a key administrative role in scouting and development, leading to the Blue Jays’ five AL East Division championships, and World Series crowns in 1992 and 1993. 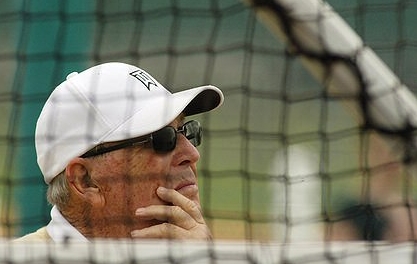 Bobby Mattick continued to evaluate talent late into his life.  The Blue Jays had invited highly touted Japanese submarine pitcher Denny Tomori for a work out and Mattick was on hand to evaluate the righty. Said then-GM JP Ricciardi:  “Any time you have 87-year-old Bobby Mattick asking for a bat [to swing against Tomori], that’s a good time to pass.”  Tomori signed with the Red Sox but never made an impact in the minor leagues.

Two years later, Mattick passed away at his Arizona home at the age of 89.  In honour of Mattick, the Blue Jays renamed their spring training facilities the Bobby Mattick Training Centre at Engelbert Complex. Mattick’s #3 jersey hangs proudly in the foyer. 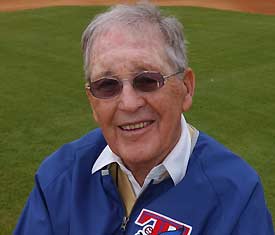