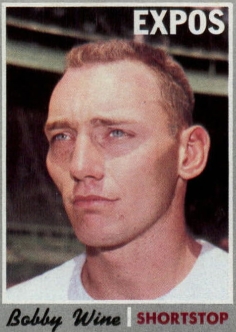 Here is a story about original Montreal Expo Bobby Wine. 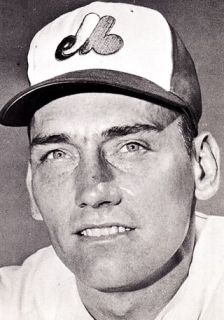 Bobby was the result of a conversation between me and mud.com pinch hitter Tight_PP.

We went to the annual Sports Memorabilia show in Mississauga, ON.  We go and we are floored by the hockey nerds.  I think at comic book conventions you will get women.  I think there were 2 women on the Friday night amongst 1000’s of nerds who haven’t seen a woman since the show last year.

I am an avid collector of Canadian Issued baseball cards.  One dealer had many single cards from early 1970 issues of London Ontario produced O-Pee-Chee.

The 1970 set is a popular set and not as valuable or rare of other late 1960’s/early 1970’s OPC issues.  The stars are always easier to find and demand a premium but it also the first year that OPC made a more comprehensive series with 546 cards.  This expansion of the set makes many of the commons very hard to find.  You will be able to find 100 Thurman Munson RC’s to every 1 Bobby Wine.

I crack out my checklist printed on computer paper and pass it to TightPP to look through the 1970 set while I cruised through the 1973 set.  TightPP even asks me, “You want to pay $2 for a Bobby Wine?”

Early, of course, says “Of Course! Bobby Wine!  Original Expo and one of the worst players in the history of major league baseball”  a quick look at the stats on the back of the card reveal Bobby was coming back to the Expos sporting a lifetime .214 average. 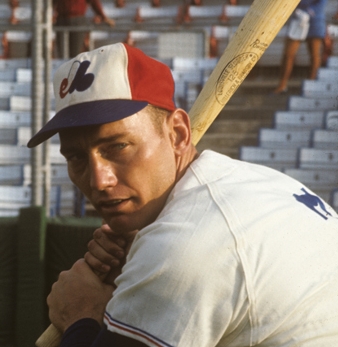 A quick look at www.BR.com reveals more about Bobby’s futility.  Bobby followed Gene Mauch from Philadelphia to Montreal.  Although a utility player, Bobby took over the starting job at short at the start of June 1969.  Along with Rusty “Le Grand Orange” Staub, Mack Jones and Bill Stoneman, Bobby Wine was a staple in the bleak few seasons of the MLB experiment at Jarry Park in Montreal.

Bobby, a New York native, provided a steady, veteran hand at short stop in the early days of Les Expos.  His hitting was a different story.  In his three full seasons in Montreal (1969-1971) he had an OPS of .508, .590 and .492 respectively.  This was a pitching era and weak hitting middle infielders such as Ed Brinkman, Mario Mendoza, Duane Kuiper were not uncommon.  Even players such as Felix Millan and Don Kissinger were all-stars with abominations of hitting lines. 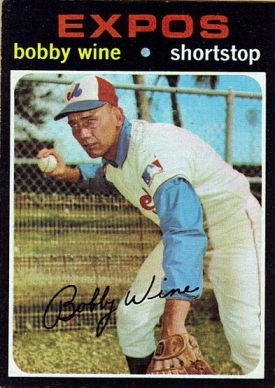 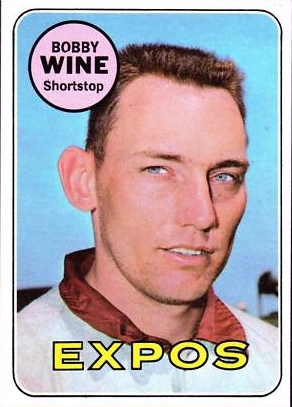