I had seen this book at bookstores for about a year and had no intention of ever reading it. I expected it to be a ra-ra for Canadian baseball and thought it would explain Canadian baseball in a hockey context. Hockey talking head Don Cherry has even provided the foreword. I noticed this book in my father’s collection, he had a bookmark halfway through, but I decided to take it and read it anyway.  Respected, veteran Canadian baseball journalist Bob Elliott’s articles can be found daily in the sports pages of the Toronto Sun.

In his book he does delve somewhat into Canadian ballplayers and their “hockey mentality”; how they are more mentally and physically tough but still quiet and unassuming but also injury prone. I would have put this book down if Elliot dwelled too much on, “What makes a Canadian Special” because I find many Canadians have to justify their existence amongst Americans, whether it be an actor, recording artist, ballplayer, almost everything except hockey players. But Elliott can floor the reader with amazing tidbits and trivia that only a well-researched work would produce. Elliott believes that many Canadian pros have shortened their careers by crashing into fences with reckless abandon and playing through injuries that should have been treated with surgery. This is a “hockey mentality” but hockey players do not need the skill set that ballplayers need, a hockey player can play a season needing surgery on his rotator cuff, a pitcher can not and when he tries to work through these injuries he threatens his career. Even Canada’s best hitter in the 20th century and future Hall of Famer Larry Walker averaged only 132 games in his 15 full seasons. In his career he missed around 400 games due to injury. It makes the reader think, now that Canadian players are represented in professional baseball and NCAA baseball now more than ever it maybe time to start treating ones body like a ballplayer rather than a hockey player.

Elliott starts his book by writing about his own life, his upbringing in Kingston, Ontario. When he starts into the chapters about some of the greatest and most interesting Canadian ballplayers is when this book is hard to put down. The bios he provides on Ferguson Jenkins, Larry Walker, The Zimmerman brothers, Kevin Reimer and some of the 19th century Canadian stars is amazing and worth the read on their own. Some of the lesser known Canadian stories such as one-game-wonder Eric Mackenzie are great stories that would never be told if a player wasn’t from Canada and probably by no Canadian sports writer other than Elliott.

He sometimes, to encompass all of Canadian baseball, veers into the amateur and international scene. Sometimes this can be dull unless the reader remembers the 2004 Olympic semi-final against Cuba or the 1992 World Junior Championships (I think this is his example, I have forgotten already since I care so little). I have seen many amateur and senior ball games in Canada and many of the things that go on are not worth putting in a local newspaper let alone a nationally published book.

The one part about amateur ball that I did find interesting is how different provinces go about developing professional players. Interesting to see how Quebec and British Columbia have leagues and programs for high-school aged players. This is the most important time for a player if he is going to get drafted out of high school or get picked up by a US college.

His second to last chapter also is very fitting on the topic of Canadian baseball. While going over the good points and near misses of success on the field Elliot touches on the demise of Les Expos. He tell of his memories of the Montreal Expos while they are going about their last week and last game at the Big O and especially on Claude Raymond, long time Expo and first Quebecker. He includes input from Expos such as Jim Fanning and broadcaster Dave Van Horne.

I perhaps judged this book by its cover – a baseball in a snow bank – a Canadian cliché for the American game if there ever was one. This was a good easy read by a knowledgeable and respected author. Pro-baseball and pro-baseball players have existed in Canada for 150years, amateur ball dates back even further. Baseball is a Canadian game, albeit a distant second to hockey. For anyone interested in Canadian baseball this is a must read.

Bob Elliott’s the Northern Game is “Baseball the Canadian Way”. It’s a half-decent read, yet I can’t help but feel cheated in some regard. When I picked this book up, I quickly read the inside flap, which proclaims:

In “The Northern Game,” the rich past and riveting present are explored in a lively, anecdotal account that captures the uniqueness of the Canadian baseball experience.

This led me to expect a wide-range look over the entire history of Canadian Baseball, past and present. What I ended up getting was a collection of self contained articles dealing mostly with the past ten years of Canadian baseball. The argument can be made (rightfully so by the way), that these past ten-fifteen years have marked the high point of Canadian Baseball history, with the Blue Jays wining the World Series twice, the Expos moving to Washington and the success of many Canadians in the major leagues. I’m not going to dispute this point, and only a fool would. But my qualm with this is simply that I, along with most Canadians already knew all of this going in. There are bios on Larry Walker, Eric Gagne, Corey Koskie and other players, but this hardly covers the history of the “Northern Game”.  Now I never read Elliott’s column, but it seems to me that this book is made up entirely of his past columns, pumped up and padded. Very rarely does Bob go into anything that happened during the early days of Canadian baseball. When he does it’s a ten page story on Tip O’Neil and the rest of the forgotten Canadian superstars, or some preposterous, unconfirmed source on how baseball may have originated in Canada.

The point that I’m trying to drive home is this; if you’re interested in the current state of Canadian Baseball, its major league players and a few stories on Elliott’s vision of Canadian Baseball, then this book is for you. But if you’re looking for something a little less cute and far more historically significant, then you should look elsewhere. 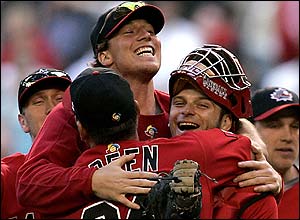