I share my thoughts on the deal further down the page. But to start things off, I’m going to take a look at Lincoln’s 2012 season.

Why am I skipping ahead? I’m assuming you’ve read up on the trade and already know the gist of the deal:

“He could start but Brad Lincoln’s basically a two pitch reliever: fastball & curveball”

This is what’s floating around on the web. And I can’t really argue any of these points; Nor do I want to. With that taken care of, let’s see what the Toronto Blue Jays new bullpen arm has done in 2012.

Velocity gains on the fastball seem to get all of the ink, however, the curveball is far and away Brad’s most effective offering. The batting line against is something to behold. Really, a .185 SLG % against?! Easily one of the best rates in the majors. There are also a number of other statistics that point to the dominance of this pitch.

The curve is a combination of velocity and movement. It’s very similar to AJ Burnett’s curveball, except Lincoln throws his faster and with more movement. That’s one hell of a pitch.

It’s set up by his astounding fastball command.

Velocity gains have been well documented. Lincoln has gained about 1.5 MPH on his fastball, and throws it at 93 MPH on average. He throws it for strikes early and often in counts.

Here’s a time lapse video his fastball location. Personally, I’d like to see him get the pitch down with more consistency:

I think, with a little bit of tinkering, there is some upside with Brad’s fastball. Clearly he can command the pitch at will to the middle tier of the strike zone. If he’s able to vary the pitch’s location and still throw strikes, it should limit opponents line (278/.342/.511) against the pitch.

If he’s able to do this, and maintain or even slightly regress his curveball’s success, he should be a dominate reliever for the foreseeable future.

Conventional baseball wisdom is as follows:

Umpires will reward pitchers that are frequently around the strike zone<

Unfortunately for Brad, he’s been getting squeezed this season. ESPN has a filter for pitches considered ‘on the black’. 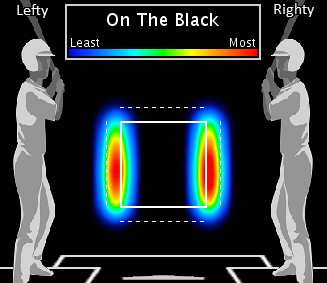 These pitches are called strikes, on average, 68.8% of the time across the MLB. Brad is only getting a strike call 55.6% of the time. This places him in the lowly 8th percentile. He’s getting squeezed, a fact that certainly goes against conventional wisdom.

The most troubling stat is Brad’s 8 HR allowed in 59.1  IP . The HR are coming off the fastball. On the plus side, the average distance is 398 feet, which is right at league average. 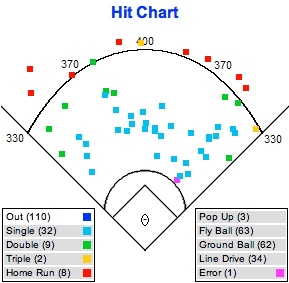 To infinity and beyond

Ok, perhaps not infinity; Brad is under team control until the 2018 season.

Huston Street just signed a deal 2-year, $14 million contract (with an option). This contract has been hailed as a win for management by various Padre Blogs, including ChickenFriars.com:

… keeping a Closer around for $14 million over two seasons is a bargain when one considers how other Closers around the league like Heath Bell are earning upwards of $9 million per season.

This low cost frees up monetary resources, which should allow the Jays to be aggressive in the Free Agent market and/or trading for high salary players.

While it hurts losing out on any potential upside from Travis Snider, the fact is he’s at best a platoon player at the MLB level.

The trade gives the Jays a glimmer of hope in 2012 and sets them up for a potential run in 2013. While my opinion in this matter may not be popular, I think this is a trade is a win for the Jays.