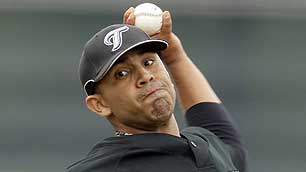 Let’s take a look at Ricky Romero’s strong MLB debut performance this afternoon vs the Detroit Tigers. For those that missed the game (which is most of us due to no local TV) lets quickly recap. Over the course of six innings former first round pick (6th overall) Ricky Romero held the Tigers to two runs on seven hits & two walks. He allowed one home run and struck out five. He pitched as advertised, with a groundball ratio of 3:1 (9 GB, 3 FB).

This graph snap is a rundown of his strike percentage. He was consistently around 60% each inning save the first. The old timer rule of thumb is a 60/40 ratio, so he did a good job today. 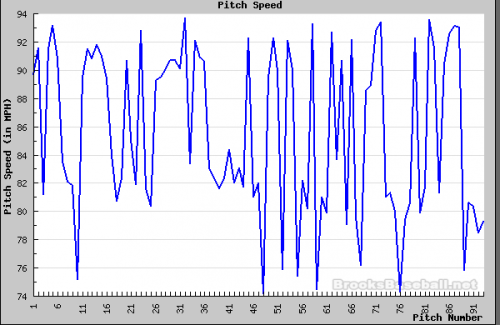 Most PitchF/X graphs look like this. It’s a rundown of each pitch and the velocity. No averages, just each pitch thrown. As the game went on the yo-yo effect increases, signaling a greater trust in his off-speed offerings. Finally I’ve added a vertical drop chart. Anything above the line rose, anything below sunk. This tells me that Romero isn’t as much of a sinkerball pitcher as his GB ratio would indicate. Almost every pitch around or above 90 MPH rose.

After a few great comments from ‘Spifficus’ and some research I see that I’ve made a gaff in my vertical plain analysis. A 3″ average rise on a fastball actually indicates some serious sink. Almost too much. As anyone watched the Braves season opener or caught the highlights will attest, Derek Lowe had some big time sink on his fastball. And it registered right around +5 in vertical sink.

I went back into MLB.TV and watched a number of Romero pitches. His fastball lacks serious sink IMO and, at least of this day, appeared to be fairly flat. It did have some late in the zone downward movement but nothing indicating too much sink. It may be an issue with his delivery and the Pitch F/X gun properly picking up his fastball. His fastball does have almost a straight change style of movement. After comparing lefty pitch F/X data I’ve come to the conclusion that his fastball has little horizontal movement. Vertically it most closely resembles the downward movement of a cutter. Remember, a cutters strength is the cut itself, with late horizontal and some downward movement. Ricky’s fastball lacks the real cut of cutter but does have some of the late sink traits. If I had a gun to my head I’d say that Romero throws a poor mans cut fastball.

Watching the game data it still appeared that Romero was earning many GB from his sinker and curve. I think we’ll need another game of data before drawing too many conclusions, although I can still safely stand by my claim that Ricky pitches almost backwards, using his off-speed pitches to set up his fastball.

Back to original article

A big gap exists between roughly 84 and 90 MPH. He appears to induce many of his groundballs via sliders, curves and a two-seam/change hybrid.