The news just came across the wire via Sports Illustrated writer Jon Heyman. Scott Rolen has been dealt to the Cincinnati Reds for Edwin Encarnacion, Josh and Zack Stewart.

Let’s look at this deal purely by the numbers for the MLB players and with some forward looking assumptions for the prospects.

Rolen has upped his value to around a five win above replacement level player. From a linear dollar win value Rolen should be worth about $20 million this season. (pro-rated, currently he is 3.0 WAR and $13.6 million). I take these numbers with a grain of salt. Still, they will be useful for this comparison.

For the record Rolen was due $11 million by the Jays next season. When aquired the Jays gave the Cards $1.8 million. St.Louis is on the hook for paying the $4 million bonus due to Rolen in 2010. The rumors going around are that the Jays are on the hook for a portion of Rolen’s contract this season (and possibly next).

Edwin Encarnacion has gone from decent to below replacement level. Before we jump into the fancy numbers I’ve spotted one big negative trend, his contact rate. This season his overall contact rate is at a career low. Also, his LD% is lowly 13.9%. Both of these numbers are well below major league average. These are the main reasons for his .209 batting average and -1.9 batting runs.

Edwin is one of the worst fielding players in the MLB. His UZR/150 this season is -23.1. His fielding runs are -6 and climbing. 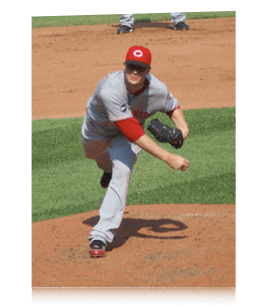 Josh Roenicke: Roenike is a 26 year old hard throwing right-hander. He’s been a reliever his entire minor league career and has been developed as a closer. His K/Rate is 10.9 for his minor league career, and his K/BB ratio is 2.82. Opponents have a hard time hitting the longball off of Josh, with only six hit in 159 IP. This season in 13.1 major leageu IP Josh has struck out 14 vs 4 BB. He has allowed 13 hits, with 11 being singles. He has an above average GB/FB ratio. The Jays are probably expecting Josh to become a closer or set-up man at the MLB level. 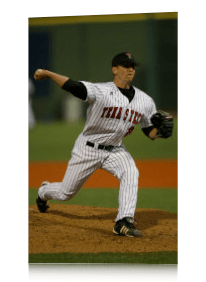 Zach Stewart: Zack had very little pitching experience in a major college program, pitching only one season at Texas Tech after bouncing around junior college. In his final season he posted a poor 1.47 WHIP and struggled with command. Still, scouts loved his stuff (mid 90’s fastball, good slider) and the Reds selected Zach #88th overall in 2008. This season Stewart has owned minor league hitters, with a 1.67 ERA in 91.2 IP. Over this time he’s allowed only 87 hits, struck out 79 vs 26 BB and surrendered only two longballs. His GB/FB ratio is above average, at 2.05 this season. His BB total has been high in college and at certain pro-levels.

The main issue with Zach (aside from control) is building up arm strength (he started only 3 games in his final college season vs 17 relief appearances). This season in AA Stewart had a 3-0 record with a 1.46 ERA over seven starts, yet only threw 37 IP. Stewart has worked exclusively out of the pen in AAA Louisville. Realistically Zach is a few seasons away from contributing as a starter. Will the Jays brass convert him to the pen in the short-term?

At first glance I hated this trade. Rolen has a year and two months left on his contract, which is now starting to look like a bargain. Edwin is awful. I’m sure he was forced upon the Jays in this trade, with his below replacement level production and $4.75 million contract in 2010. The two power righties are intriguing. I like the Jays getting arms with upside vs soft-tossers that are heavily stocked in the system. As for this trade itself I’m on the fence. In the short-term this should be a disaster, but if one or both of the arms produce this may wind up to be a decent deal in the long-term in terms of value vs win expectancy. This trade could go either way.