Around 12 hours ago, Brett Lawrie was representing the tying run in a 4-3 game in the bottom of the ninth. He worked a 3-1 count and then all hell broke loose.

A long story short, Lawrie had the next two pitches, clearly balls, called strikes. He lost his shit, threw down his batting helmet, which proceeded to ricochet off the ground and hit umpire Bill Miller. He was tossed and will assuredly be suspended. 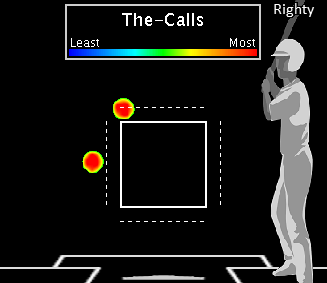 As the video and the heat map clearly show, both pitches are off the plate.

Bill Miller’s 2012 overall strike zone is near the MLB average in terms of called strikes.

His strike zone when a righty is batting is a little large.

However, with two strikes Miller’s zone gets VERY loose, and he really becomes a batters nightmare, as he gives pitchers a large portion off the plate inside and also high & away. 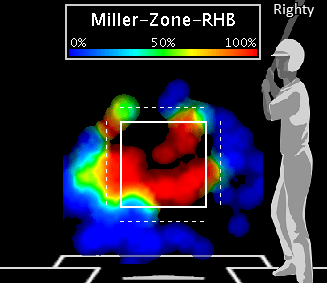 By looking Miller’s recent historical zones, along with last night’s called strikes, I don’t think he had a personal vendetta vs Lawrie. Did he have a shitty night? Oh yeah, look at all of the pitches away to righties. But when comparing the games zone to the strike calls against Lawrie, I can at least understand why the bad calls were made.

With that said, I agree with Lawrie for both

A) Not swinging at either pitch

B) Being pissed off

Brett is an emotional player, it drives his game. Of course with emotion there will be ups and downs. The Toronto Blue Jays organization has done a GREAT job in taking in players that other organizations deemed to have make-up issues (Lawrie, Rasmus, Escobar) and making it work.

Hopefully Lawrie’s suspension is short. But when he comes back I hope he continues to play with flare & passion. And maybe a little chip on his shoulder.