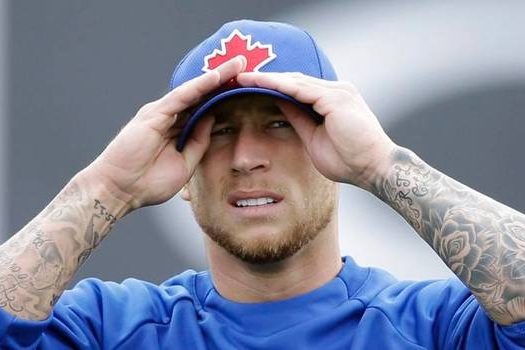 In the beginning of May, Toronto Blue Jays third baseman Brett Lawrie was moved to second base and Juan Francisco played third base in order to keep Francisco’s potent bat in the lineup during inter-league play.  Lawrie made it clear that he was unhappy about the switch and that he sees himself as a third baseman.  The reason?

I thought that was a bit of a strange quote at the time, since every position in baseball requires a great deal of thinking on a pitch-to-pitch basis. Perhaps he wasn’t thinking when he made the comment.

In a game against Philadelphia, Lawrie tweaked his hamstring and the position-switch-issue was put to rest… until yesterday.  Lawrie returned to the Blue Jays starting lineup, but Colby Rasmus was on the bench with a tweaked hamstring of his own. Lawrie began the game as a third baseman, but to cover for Rasmus’ absence, Lawrie was moved to second base in the 7th inning.  When asked how he felt about it post-game, Lawrie explained:

“Just go over there and pretend it’s an overshift,” he said. “Just make the play, not think about it.” – Buehrle solid, Bautista and Lawrie go deep to avert sweep, May 20, 2014.

What’s with Lawrie’s reluctance to fire a few neurons in his brain when he’s playing baseball?  He makes it sound like one has to be a rocket scientist to have the brain-power required to play second base with all of “these different things.”  More concerning is the fact that Lawrie professes he’s at his best when he’s not thinking at all.  This implies that the third base position doesn’t require a lot of thinking.  Nothing could be further from the truth.

To a large extent, a player can put his brain into neutral when the opposing team has no runners on base.  Yet with the Blue Jays’ current state of affairs in regard to pitching, this is not often the case.  It’s when runners are on base that a third baseman’s mind has to be at its sharpest.

For instance, if there are runners on first and third and one out, what is the third baseman thinking? Firstly, how fast is the runner?  If it’s a hard grounder, it’s a 5-4-3 double play.  If it’s a line drive? Look to double off the runner at first because the man on third base freezes on anything in the air until it gets through the infield.

If it’s a soft grounder or a hit and run?  If the player at bat is fast, you know you’re not going to turn two.  Look the runner at third back to the bag and make the force at second.  At the very least, get one out.  There’s two out with two runners in scoring position, but it’s better than bases loaded with one out because the hitter beat the throw to first.

A grounder in the hole? It takes the third baseman away from the plate so that he has to throw to second and hope for the double play.  A rocket down the line and you take what you can get, which might just be the runner at first.

Each and every one of these scenarios must be visualized before each pitch.  On top of that, the third baseman has to anticipate where the ball might be hit according to where the catcher sets up and what pitch is thrown.  If you’re not thinking – and Lawrie claims not to – what will you do after you’ve slid hard in the dirt after a ground ball and you’re trying to find the ball in your glove? Do you have time to go through all the scenarios in your head at that point? No.  It’s automatic or it doesn’t get done.

In addition to all those scenarios I just mentioned, there’s an entirely different set of defensive possibilities in the event of a fly ball or a base hit to the outfield.  As well, bespoke defensive positioning for each hitter needs to be taken into account.  Shade a player close to the line? Move toward the shortstop?  It also depends on the pitcher and how well he is performing on any given night.

With the count 2-1, for instance, a pitcher will likely throw something in the strike zone.  The hitter knows this and he’s set on crushing it – usually anticipating a fastball inside.  If it’s a right-handed hitter, it’s wise for a third baseman to hug the line.

If the count is 1-2, a hitter is protecting the plate.  If it’s not a pitch that he can drive, he’s trying to get a piece of it, foul it off.  He’ll let the pitch travel further into the strike zone than he normally would in order to avoid the strike out.  Knowing a hitter will be holding back that split second means the third baseman should be shaded toward the shortstop.

But the most important play for a third baseman to master? Knowing when to not make a play. As is often the case with young players, many of Lawrie’s errors have been of the throwing variety.  It usually happens when he gets out of the dirt or off the turf and hurries the throw.  What he should do is eat the ball, but being young (Lawrie is only 24) he sometimes doesn’t know when to concede.  The most important thought a thinking third baseman can have is knowing when to pull the plug.

Even while playing brain dead, Brett Lawrie is already an elite defender and one of the top defensive third basemen in all of baseball.  But how much better could Brett Lawrie be if he put some thought into his play?  The sky is the limit. But with life coaches Brian Butterfield, Omar Vizquel and Mark DeRosa now departed, who will be the one to educate him? 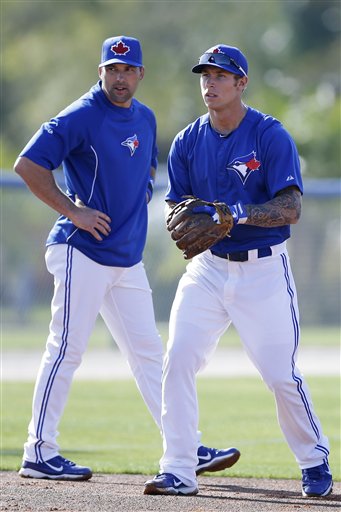