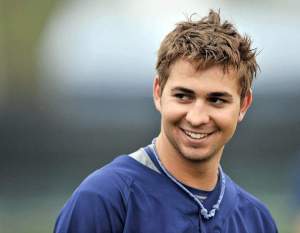 That’s Cale Iorg, commenting on his decision to sign upon the return from his Mormon mission.

About a year ago I checked in on the Baby Jays and mentioned Cale Iorg, the son of Garth Iorg.

The youngest of Iorg’s three sons, Cale didn’t play an official baseball game from when he left for Portugal on a Mormon mission in July of 2005 until August of 2007.  Garth said Cale had stayed in shape over those two years and had thrown a baseball, but hadn’t swung a bat.

Last week Iorg reported to the Tigers’ Spring Training camp a week after concluding his honeymoon in St. Lucia, after marrying his wife he did not see once during his 2 years in Portugal.

“He is a well-above average prospect,” Tigers manager Jim Leyland says. “He’s athletic, he has good instincts, there’s juice in his bat.

“He is what you categorize as being in the upper echelon of prospects. I think he’ll be a major league shortstop.”

Oh yeah, the money thing. The Tigers raged up Bud Selig’s blood when they went considerably over slot for their 6th round draft choice, which was recommended to be $123,500.  Instead the Tigers cut Iorg a cheque for $1.5 million.  Why so much?  That was the price the Tigers had to pay to keep Iorg from heading back to the Crimson Tide at Alabama at the conclusion of his mission.

Were the Tigers not concerned that he might lose his skills after being laid off from the game for 2 years in prime developmental years?

“Nothing led me to believe that he’d lose those skills, even though for most of the time over there (Portugal) he couldn’t pick up a ball,” said David Chadd, the Tigers’ vice president of scouting who had seen Iorg play as a senior in high school, and at Alabama his freshman year.

“He might come back rusty, but he was going to figure it out. He’s got five tools,” added Chadd, who acknowledges that “the Iorg lineage was important to consider. He can run, he can throw, he can field, he can hit, and hit with power.”

I’m no scout, but it seems awfully risky to me to drop $1.5 mil on a player based on his “lineage”. I don’t mean to be a hater, but Garth was no stud.  I am just a blogger, what do I know? What does Tigers GM Dave Dombroski think?

“We think Cale Iorg will be an All-Star.”