John Grisham is likely the most famous author in the legal-thriller genre of novels – his books have sold over 250 million copies worldwide.  His most popular novel, the Firm, was made into a Hollywood movie starring Tom Cruise.  Eight of Grisham’s other novels have also been adapted into films: The Chamber, The Client, A Painted House, The Pelican Brief, Skipping Christmas, The Rainmaker, The Runaway Jury, and A Time to Kill.

Though I don’t have a particular affinity for any of the titles listed above, Grisham’s The Testament  is one novel I will always look back on with a certain fondness.  When I saw that Grisham had decided to make a foray into the baseball world with his latest novel, Calico Joe, I had a passing intrigue, but nothing more.  When Calico Joe began to show up on the New York Times Bestsellers list, I was, of course, gifted with it for my birthday and had no excuse not to read it.

The greatest difficulty I had in reading the book was resisting the urge to compare it to Chad Harbach’s seminal work, The Art of Fielding  – the most recent baseball-book I had read.  If I were to do that, Calico Joe would be a major disappointment.  That said, Calico Joe is a vastly different kind of story; a much lighter read, meant to be more of a whimsical distraction than anything else.  At only 194 pages, I finished the novel in two sittings. 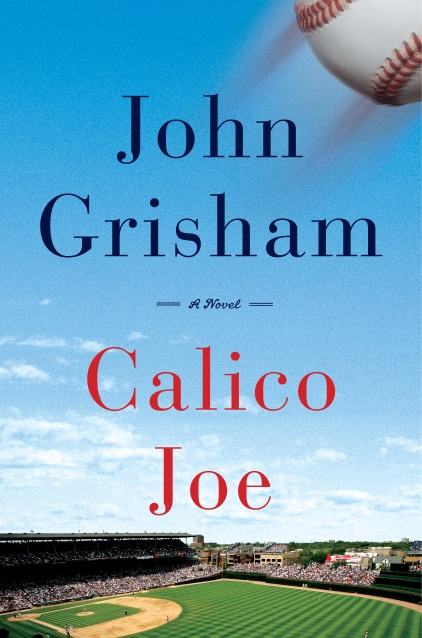 From the inside of the book’s jacket:

In the summer of 1973, Joe Castle was the boy wonder of baseball, the greatest rookie anyone had ever seen.  The kid from Calico Rock, Arkansas, dazzled Cubs fans as he hit home run after home run, politely tipping his hat to the crowd as he shattered all rookie records.

Calico Joe quickly became the idol of every baseball fan in America, including Paul Tracey, the young son of a hard-partying and hard-throwing Mets pitcher. On the day that Warren Tracey finally faced Calico Joe, Paul was in the stands, rooting for his idol but also for his dad.  Then Warren threw a fastball that would change their lives forever.

Of course, the elephant in the room is the question of whether a legal-thriller writer such as Grisham has the chops to create a fun to read – but most importantly, believable – baseball novel.  In the end, he does just that.

The story details how Joe Castle, from Calico Arkansas, begins his big league career like a shooting star.  34 pages into the book, I was assured that Grisham understood baseball when he detailed the theatrics of a certain situation.  The main character (more or less), Calico Joe, had just broken a baseball record that was supposed to be unbreakable:  he hit safely in his first 13 Major League at-bats.

Standing on second, he put his hands on his knees and stared at the dirt and for a few seconds tried to believe and savour the moment.  The stadium was manic;  the noise was earsplitting.

The Giants catcher, Dave Rader, had the ball and, when the dust settled, called time.  Slowly, he walked past the mound to second base, where he ceremoniously handed it to Joe Castle.  The crowd roared even louder with his memorable act of sportsmanship.

Joe removed his helmet and acknowledged the adulation.  The umpires were in no hurry to resume play.  They were witnessing history, and the game is played without a clock.  Finally, Joe walked to the seats beside the Cubs dugout and tossed the ball to his father.  Then he went back to second base and put on his helmet.  He looked deep into centre field and quickly wiped a tear from his cheek.  A camera caught it, and Curt Gowdy and Tony Kubek made sure the world saw that Joe Castle, standing alone on second base and alone in the record book, now a legend, was human enough to show emotion.

It’s these type of spontaneous moments that the sport of baseball is notorious for.  Pomp, theatrics and the display of raw human emotion is what makes baseball so appealing to so many of its fans.  Grisham was able to capture the essence of it in those few paragraphs.

Although the subject of baseball is a departure for Grisham, the narrative is written in the same style as all his legal novels.  There are parallel, connected plot-lines that eventually merge, with Grisham leaving breadcrumbs as to how they are connected without giving too much away.  Of course, it doesn’t turn out to be at all what you think.

What is unique about Calico Joe is that it is partly told from the perspective of an 11-year old boy.  Grisham writes in such a way that it is believable when appreciating the way the game of baseball is played through such young eyes.  For example, from pages 60-61:

For the American League, the fans had selected such greats as Brooks Robinson, Reggie Jackson, and Rod Carew.  Catfish Hunter started on the mound.  In the National League, the Reds had three starters – Pete Rose, Joe Morgan and Johnny Bench.  The Cubs had two – Ron Santo and Billy Williams.  Hank Aaron was at first base.  A record fifty-four players made it into the game, and I had the Topps baseball card for every one.  I knew their ages, birthplaces, heights, weights, and all their stats.  I did not deliberately memorize all this data.  I simply absorbed it.  The game was my world; the players, my idols.

The situation explained above mirrors my own childhood experience.  The authenticity continues in a conversation between the boy and Willie Mays.  Grisham gives a voice to Mays that I always imagined he would have.  Grisham’s passion and understanding rings true.  In addition, Calico Joe is unique because fact and fiction are intertwined.  All of the statistics, teams, standings, players and broadcasters are real.  Joe Castle and some of the events are fictitious.  The interplay between reality and fantasy is fun, and Grisham has taken great pains to ensure historical accuracy.

With that said, it feels as though Calico Joe only received perfunctory attention when contrasted against his famous legal novels.  The conclusion of the book – without giving anything away – is anti-climatic, neat and tidy.  That’s not to say that it doesn’t conjure up a well of emotion, but the story and the conclusion itself have a formulaic aftertaste.

While Calico Joe is not necessarily a compelling read, it remains a worthwhile story with a strong message about courage, redemption and forgiveness.  When taken on its own merit, Calico Joe is the perfect novel to read in an airport lounge while waiting for a flight.  Just don’t pit it against The Art of Fielding.

PS – if you’re not much of a reader, you’ll be interested in knowing that Calico Joe will be getting the Hollywood treatment.  Director Chris Columbus has signed on to film an adaptation of the novel.