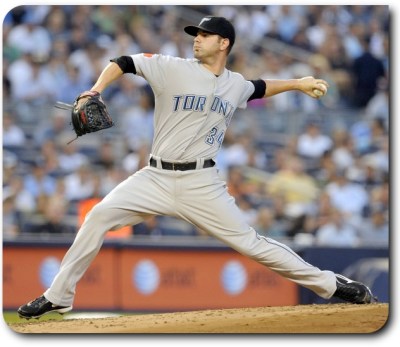 Let’s take a look at Marc Rzepczynski, the second year starter that is essentially guaranteed a spot in the rotation due to his 2009 season & Cito’s early spring comments;

According to Fangraphs pitch value run estimators Marc has one of the best sliders in the majors. His slider ranked as the second best pitch on the entire Jays staff in 2009, behind only Jason Frasor’s fastball.

Awesome. Look at all of the called strikes. Hitters are obviously fooled by the slider. In-fact opponents overall percentage of swings at pitches in the strike zone (Z-Swing) is 53% vs Marc, which is over 15% percentage points lower than league average. Even Doc’s Z-Swing rate was 66%.

Moving on, here are the total outcomes via the slider (balls in play, hits, walks, strikeouts, etc)

Dominating, plain and simple. To put this number into perspective NL pitchers hit a combined .140 in 2008.

Marcel predicts a 4-5 season with a 4.05 ERA in 2010. After seeing these slider numbers I’m putting Marc down for a minimum of 10 wins, a strong K-rate and an above average xFIP.