Former big-leaguer and Cambridge, Ontario native Scott Thorman has found a home for himself playing for the Brantford Red Sox of the Ontario-based Intercounty Baseball League.  The Atlanta Braves’ first-round pick in 2000, Thorman has played in 175 MLB games in his career.  Thorman’s experience is proving to be invaluable as the Brantford Red Sox look to repeat as IBL champions.

Thorman spent six of his 10 professional seasons in triple-A with the Braves, Rangers, Kansas City Royals and Detroit Tigers organizations. In that time he batted .272 in nearly 600 games with 95 home runs and 341 RBIs. The most prolific season of his major League career came in 2007 when he played in 120 games for the Braves, going deep 11 times in 287 at-bats.

The Atlanta Braves believed in Thorman so much that they traded incumbent Adam  LaRoche in order to let Thorman play on a full-time basis.  Unfortunately, it didn’t work out. Thorman has not played in an MLB game since 2007. 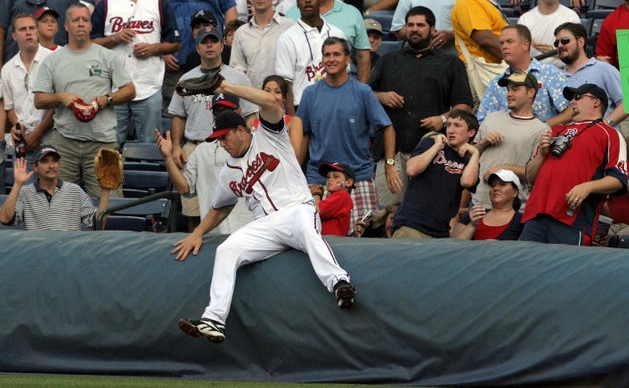 “He signed for all that money and received all that attention when he went in the first round and wasn’t that far from where I lived,” Votto told reporters Monday at Arrowhead Stadium during the National League players briefing.

“Scott Thorman was the phantom I was chasing, drafted 27th overall, received $1.2-million US signing bonus … I think.”

*note: Thorman was selected 30th overall from Team Ontario — eight picks ahead of Blue Jays second baseman Kelly Johnson. The Cambridge native was given a $1.225-million bonus by Dayton Moore, then the Atlanta Braves scouting director in 2000 and now general manager of the Kansas City Royals.

“When I was with the Canadian Thunderbirds we practised at the Frozen Ropes facility in Guelph,” Votto said. “Thorman was hitting off a tee. His swing was so powerful, so effortless, I was too intimidated to go over and introduce myself.

“Years later we played on the same team. He’s a sweetheart of a guy.”

As recently as 2010, Thorman was posting gaudy numbers. In Omaha, the Kansas City Royals’ Triple-A affiliate, Thorman had 31 doubles and 22 home runs on the way to posting an .839 OPS in only 125 games.  One caveat:  Omaha plays in the hitter-friendly Pacific Coast League. 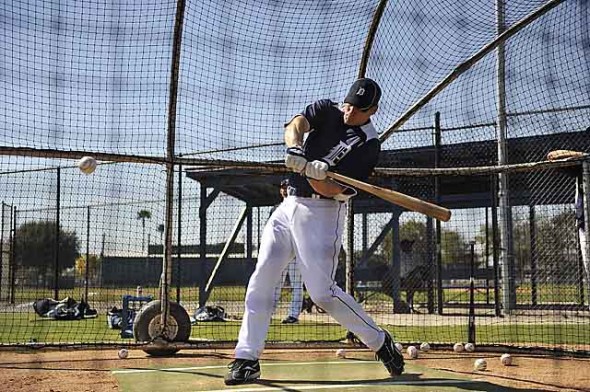 The following season Thorman played for the Detroit Tigers’ AAA affiliate in Toledo of the International League, and he fell off.  In 129 games, Thorman was only able to get on base at a .289 clip, while striking out 80 times in 388 at-bats.  At the conclusion of the season Thorman was granted free agency.

Having failed to receive any offers from Major League teams, Thorman agreed to a contract with the Winnipeg Goldeyes of the American Association of Independent Professional Baseball.  However, right before the season started, the Yucatan Leones of the Mexican League came calling.  Feeling (rightly) that he would have a better shot at making it back to the big leagues though Mexico than Winnipeg, Thorman made the move to Mexico.

After 5 games, Thorman went hitless in 18 at-bats. Yucatan was quick to pull the trigger and released Thorman, opting to dress a pitcher instead.  While Winnipeg still held Thorman’s rights, the team filled its four-veteran quota following Thorman’s departure.  Scott Thorman  was now in baseball purgatory.

No teams came calling except for one: the Brantford Red Sox of the Intercounty Baseball League. Why did Thorman choose Brantford? “They asked,” Thorman told the Brantford Expositor.

The Intercounty Baseball League season is 35 games in length and Thorman played in all of them in 2012. In those 35 games, Thorman put up the following stat line:

To put it in words, Thorman mashed – as he should.  Pro-rated over a 162-game season, Thorman would have 60 home runs and 231 RBI while striking out only 87 times.  He’d also have an astounding 240 hits!  Of course, these are the kind of numbers one should expect from a player who went from AAA baseball in 2011 to an amateur league such as the IBL.  That said, Thorman didn’t lead the league in all categories.  Teammate Terrell Alliman had 60 hits and 50 runs scored.  The league leader in OBP, Jeff Cowan, got on base at a .515 clip. London’s Cleveland Brownlee hit 12 homers in three fewer games played.  Guelph’s Frankie Hare almost mirrors Thorman’s OPS with a 1.168 mark of his own.  He has 10 home runs in four fewer games played, in addition to being third in the league in stolen bases with 19.  In short, the IBL is not lacking talent. 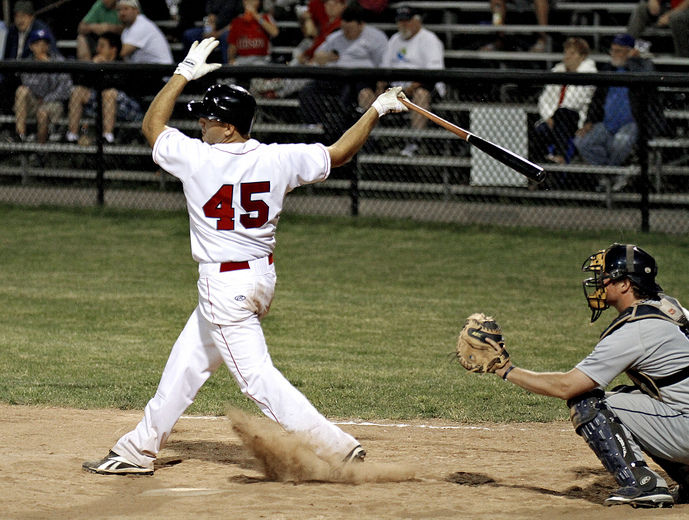 Riding the bats of Thorman, Alliman and Todd Betts, the Brantford Red Sox finished first in the IBL with a 29-6 record.  In the first round of the playoffs, Brantford played the 8th place Burlington Twins.  With the Red Sox up two games to one on Burlington, Thorman had the game of his short Intercounty career.  Thorman powered the Red Sox offence with four hits – including three home runs – finishing with six RBI and four runs scored in the win. The Red Sox clinched the series in Game 5, with Thorman stroking a double and scoring the tying run.  Brantford will now meet the Kitchener Panthers in the second round of the IBL playoffs after Kitchener upset second place London. 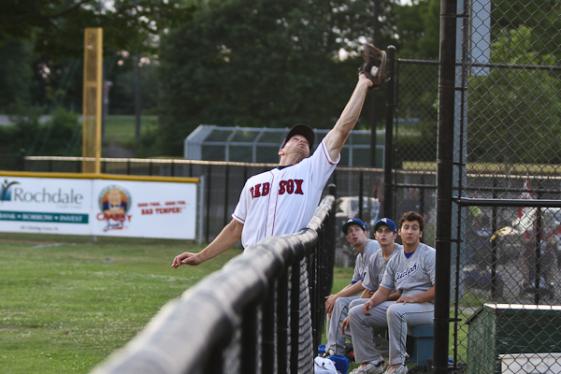 Although the chances are slim for Thorman to make it back to the big leagues from the IBL, the journey is not without precedent.  Milwaukee Brewers’ closer John Axford travelled down the same path once before.  Thorman may have an opportunity to showcase his talents this September at the 2013 World Baseball Classic qualifying round.  Since Canada did not win a game in the 2009 tournament, the team will have to qualify for a spot in a double-elimination qualifying tournament Sept. 20th-24th in Regensburg, Germany.  The rules stipulate that Major League players are not permitted to play in the qualifying round – a perfect opportunity for Scott Thorman to gain exposure on an international level.  Internationally, Thorman competed for Canada at both the 2006 World Baseball Classic and 2008 Summer Olympics in Beijing. He also donned the Maple Leaf for the 2010 Pan Am Games and World Cup Qualifier.  While Thorman may not make it back to the big leagues, with a successful qualifying tournament, he could be picked up by a team in the many professional baseball leagues that exist internationally.  And if that doesn’t pan out?  Thorman isn’t sweating it – he’s found a welcoming home in the IBL:

“All these years I’ve been on the road and away from home in the summer, it’s kind of nice to be home,” he said.

“We’re happy to be around grandparents and have the kids around their cousins,” he said. “We’re just taking it one day at a time and we’re having fun doing it.”
source 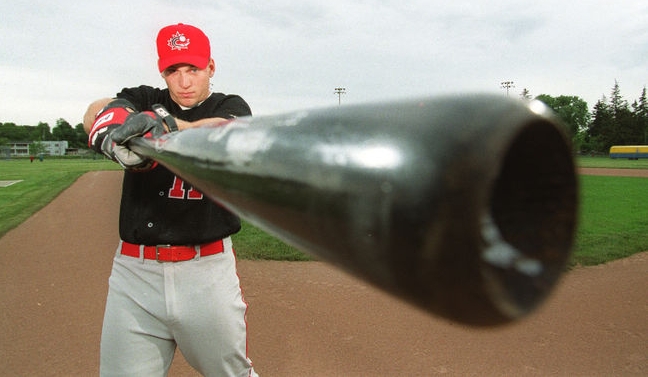