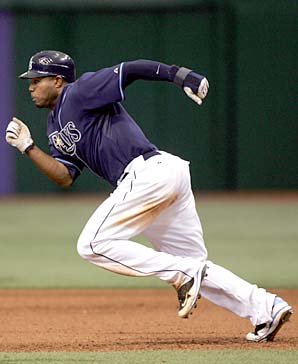 ESPN’s Buster Olney has a great 2 part video interview with Tampa Bay Rays’ LF Carl Crawford.  The article is for insiders only but the video is not so here it is!

Last season Crawford was 30 for 31 in stolen base attempts in the first 2 months. Following that his SB% numbers dropped precipitously. It was not because of fatigue but because he developed a bad habit.  As you will see from the video above, it is interesting that the smallest movement or bad habit can be the difference between a stolen base and an out.

In this video Crawford meets with new Rays hitting coach Derek Shelton and they discuss the finer points of hitting.

This being the final year of Crawford’s contract, expect big things from him this upcoming season. As well, keep your eyes peeled for the Rays’ new sky blue jerseys that they will debut this season.