Carlos Villaneuva, a name barely known outside of Milwaukee and Toronto, has gone from middle reliever to starting stud in the course of a month.

Carlos’ high level of success can be attributed to the dominance of his slider.

The slider is not only Carlos’ best pitch, but statistically speaking, the best slider in baseball from an SP over the past 30 days.

Nothing short of amazing.

And that’s not the entire story. Carlos hasn’t allowed a long ball over the past month. He’s really, and I mean really, limiting what I like to call ‘dangerous‘ contact.

Here’s a chart of all hits that Carlos has allowed over the past 30 days, on all pitch types (fastball, change, curve and slider). Take notice of the hit locations. Outside of one double to the CF wall, every hit has been to shallow or middle range in the OF. 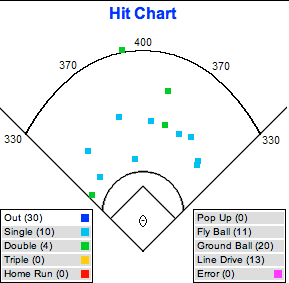 Here’s a list of outs recorded while in play. Once again, save for a collection of roughly four balls to deep CF, everything is in the infield, shallow OF or middle OF. 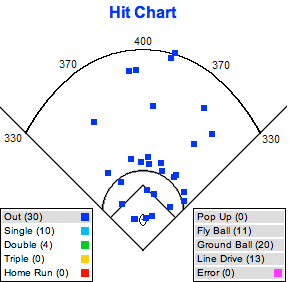 Will he maintain this level of success? Who knows? If nothing else, Carlos Villanueva has earned a look in a starters role for the rest of the season.