Last year, around this time, I wrote about how Carlos Villanueva had exceeded my expectations by turning himself into a capable starter.  After being moved the the starting rotation, Villanueva made 13 starts and went 5-3 highlighted by this pitching performance vs. Cleveland:

In his first 9 starts, Villanueva went 4-1 while sporting a 3.67 ERA in 54 innings.  As Villanueva reached the 50-60 inning plateau (Carlos pitched 52.2 innings in relief the season prior) he faded badly and was pushed back to the bullpen.  He finished with 107 innings pitched – seven less than his career high.

Carlos was penciled in for a bullpen spot coming out of spring training. With candidates for the starting rotation including Romero, Morrow, Cecil, Alvarez, Drabek, McGowan and Litsch,  it didn’t appear that there would be any room for Villanueva.  Regardless, Carlos didn’t rest on his laurels:

“The season prior I prepared to throw 60 or 70 innings out of the ‘pen,” said Villanueva, who lost more than 30 pounds during the offseason. “Even my friends asked me, ‘What if you start?’ And [I] was like, ‘Yeah, I got no chance.’ But this year with what happened last year, I just didn’t take any chances. Source

What happened this year is that the Blue Jays’ pitching landscape has been turned on its ear.  Injuries have ravaged the starting rotation; Ricky Romero is the only holdover from the rotation set on opening day.  What is most surprising is that it has taken this long for Carlos Villanueva to get a shot.  Coming into tonight’s start, Villanueva represents the 10th starting pitcher the Blue Jays have used in 76 games.  Regardless, he is here now and manager John Farrell noted that Villanueva is in the rotation to stay for the foreseeable future. Blue Jays fans will take comfort in knowing that Carlos has taken measures to prevent the flame out that happened last season:

“I came in a little better shape this year and maintaining all year a little more vigorous workout routine, so that should help me physically at least. It won’t come as a surprise to my body.” Source

The fruits of Carlos’ hard work is visible to the naked eye.  Let’s have a look at Carlos two seasons ago compared to this year: 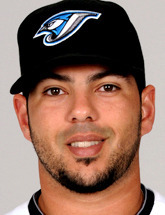 But will it translate to the diamond?

As I said in Carlos V Has Made Me A Believer:

Carlos is a classic 4-pitch pitcher, which makes him ideally suited for a starting role. He throws a fastball, changeup, curveball and slider. Although his fastball is not overpowering (it averages at ~88mph) he is able to locate it well and throw it for strikes. His change up is a “show me” pitch – he’ll throw it 4-5 times per game – at around 82mph. Unlike Ricky Romero or Brett Cecil’s version of the change, Villanueva’s breaks very little which speaks to why he doesn’t throw it very often. Villanueva throws a slow curve at ~74mph and his out pitch is a nasty slider that he throws at 80mph.

Thanks to the PitchFX Tool, I see that Carlos Villanueva’s fastball topped out at 91.2mph – about 2-3mph more than what he typically works at.  Credit to conditioning? Compared to 2011, Villanueva has added an extra mph of velocity to his fastball, on average, in 2012.

Villanueva’s “show me” pitch, the changeup, was actually the pitch he went to more often than any other pitch, save for the fastball.  In total, Carlos V threw 28 four-seam fastballs, 21 changeups, 19 sliders, 15 curveballs and 9 two-seamers.  By doing so, Villanueva was able to keep Angels hitters off-balance and guessing throughout his 5 innings.  This bodes will for Villanueva as a starter; a pitcher needs multiple “go-to” pitches to get through Major League lineups 3-4 times in a game.

Villanueva was especially effective tonight because he had his slow curveball working. Angels hitters were crossed up when they fell behind in counts; they were sitting on Carlos’ out pitch – the slider.  When Villanueva dropped the slow curve on them, Angels hitters were befuddled.  I don’t remember him having this pitch last season; it reminds me a lot of Roy Oswalt’s 69-71mph slow curve.

The highlight of tonight’s start, for me, was the Albert Pujols at-bat in the top of the 3rd inning,  With runners on the corners and only one out, Albert Pujols stepped to the plate with more tools to beat you than you can shake a stick at.  Villanueva went after him. Hard.  He started Pujols off with a 74mph curve and Big Albert whiffed.  Carlos then challenged him with a fastball and Pujols fouled it back.  With the count 0-2, Villanueva went to his out pitch, the slider.  Good morning, good afternoon and goodnight:  Pujols swung and missed for the strikeout.  Carlos V then went on to strike out Kendrys Morales to get out of the jam with style.  Nice work. 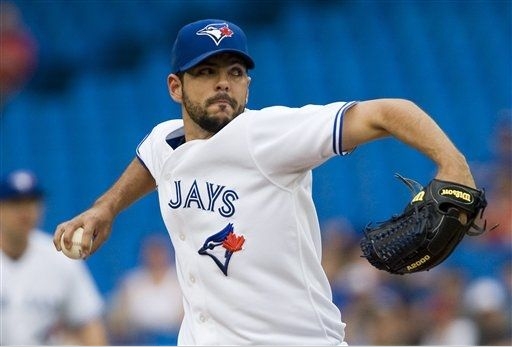 To be fair, Carlos had some help along the way in order to hold the Angels to just three runs in five innings.  As the old saying goes, “you have to be lucky to be good and good to be lucky.”  Villanueva was helped by an outstanding catch from Colby Rasmus in centrefield and a great throw from JP Arencibia to catch a would-be base-stealer.

Of Villanueva’s 92 pitches, 57 were strikes –  a strike percentage of 62%.  That’s what we can expect from Carlos V, and frankly, that’s what this team needs.  He’s not a superstar- but Carlos certainly won’t walk the entire ballpark.  Carlos will keep the Blue Jays in games – much like he did tonight in the 7-5 win – and that is all one can ask for at this point.  At the very least, a rotation that includes Carlos Villanueva means reduced opportunities for Jamie Moyer, Robert Coello, Joel Carreno and Jesse Chavez. For that I am thankful.