Jon Heyman stirred up the pot a bit yesterday, tweeting out that the Jays were interested in acquiring a back-end bullpen arm. The options presented–K-Rod, Matt Capps and Jose Valverde–reads likes a who’s who of washed up, has-been closers.

In my mind, the closer’s role shouldn’t even be open for discussion– I’m confident with Casey Janssen in the role come 2013.

Now nobody, and I mean nobody, predicted Janssen, the one time failed starter, torn-labrum season-missing reliever, 2009 batting practice-esque pitcher, would turn into one of the game’s most reliable relief pitchers. But lo and behold, he’s on the short list of MLB proven relievers.

How has he done this? Mostly by finding a cutter, refining his pitching mechanics, and throwing strikes.

Here are some of the statistical changes to his game: 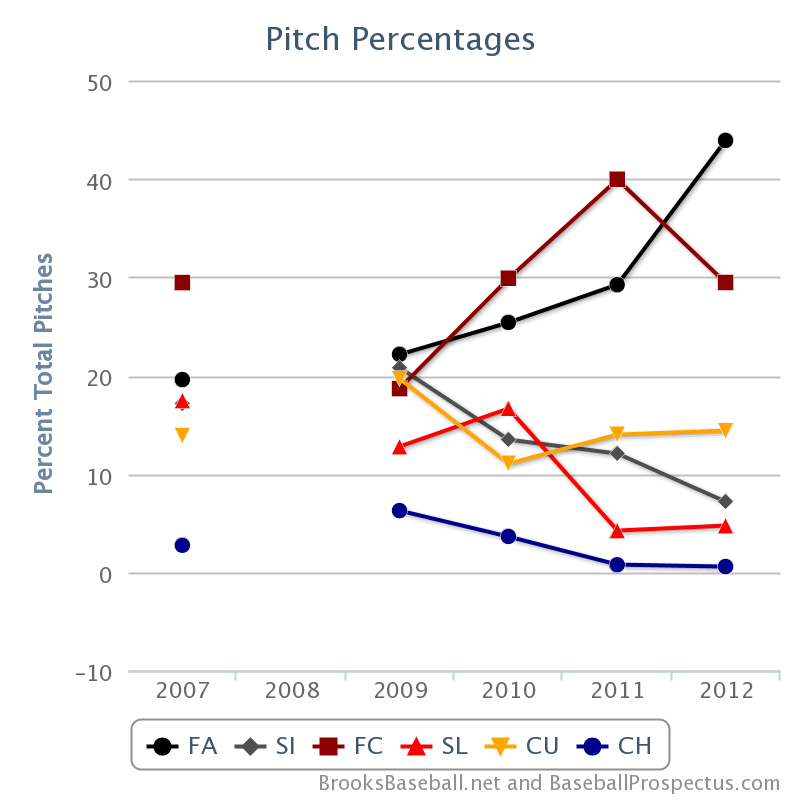 Notice the large drop in sliders thrown. This is credited to Janssen shelving the pitch against LHP. He’s also pretty much put the change-up in his back pocket, instead relying upon an increased number of 4-seamers & cutters. 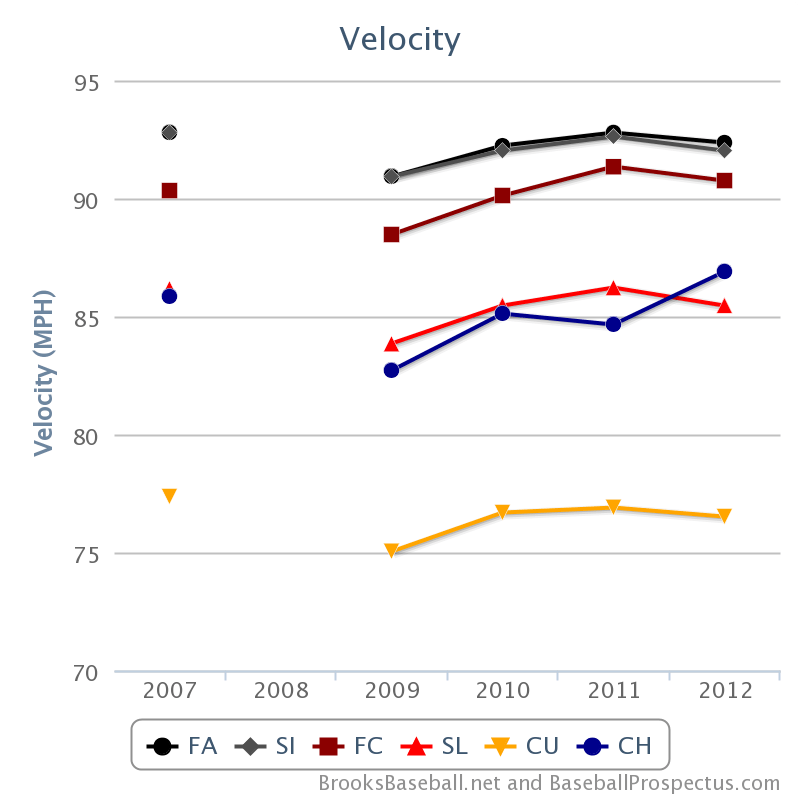 Perhaps still feeling effects in 2009-his first year back from his injury–Janssen has since added at least one MPH in velocity to all of his pitches. This could also be attributable to his ever changing release point: 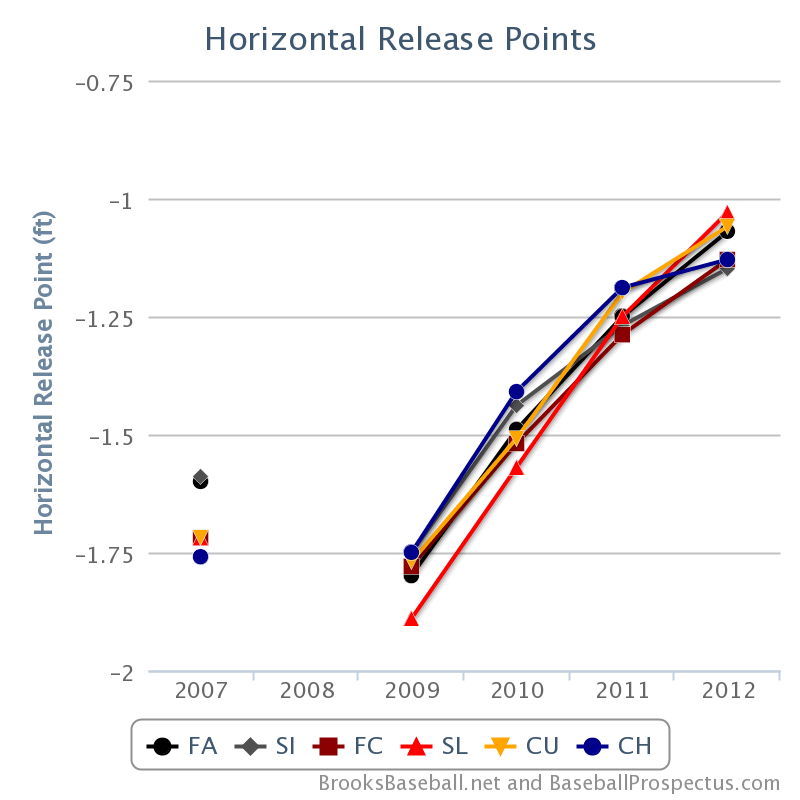 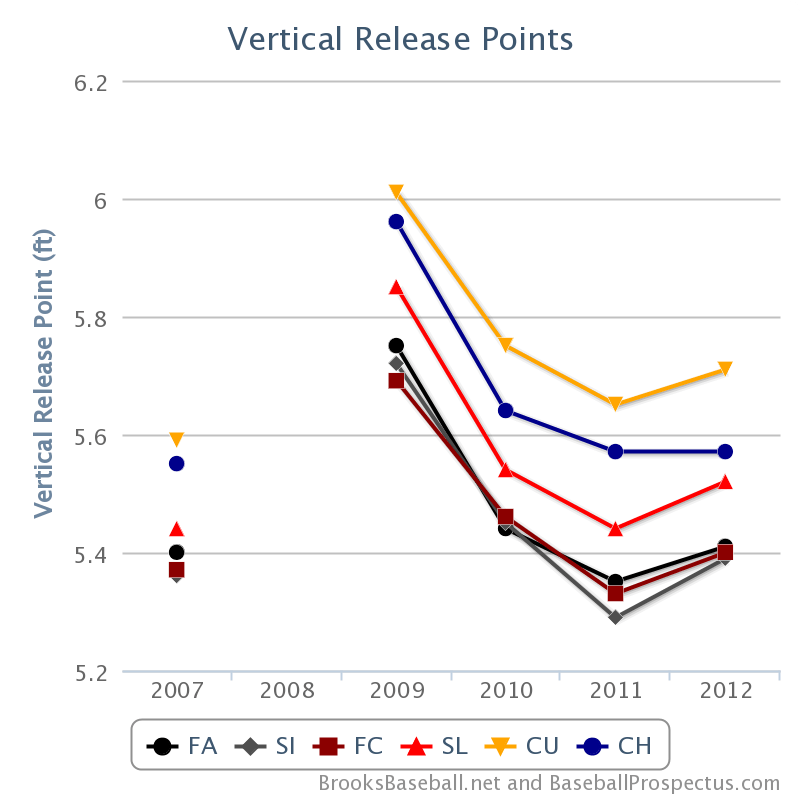 
Jumping into 2012, Janssen found success vs LHB with all three pitches. The most impressive pitch had to be the curve, earning a very high 38.9% whiff rate.

Pinpoint control allowed Janssen to locate each of his three offerings in their own designated zone. The cutter is used in, the four-seamer away and the curve backdoor. 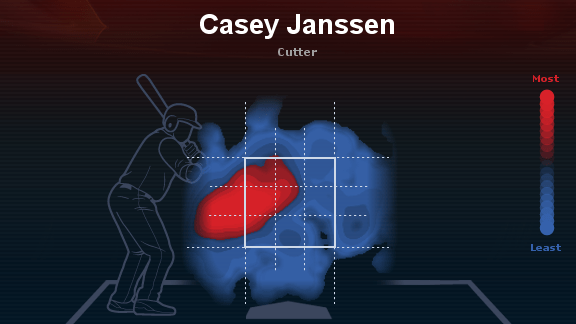 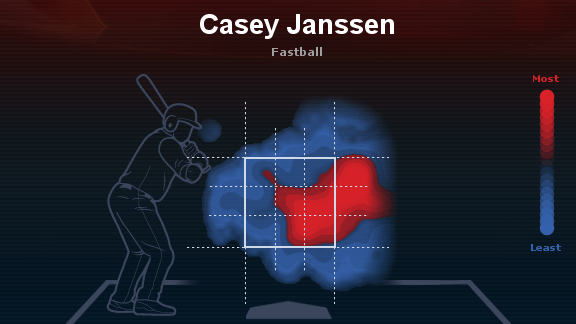 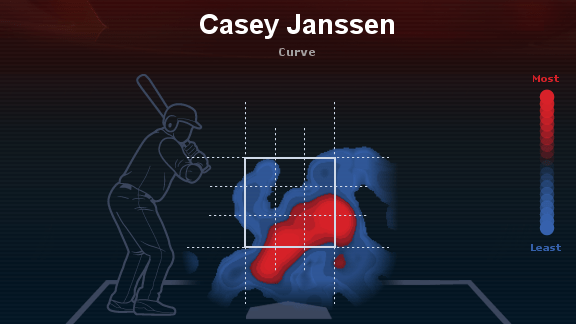 
When facing righties, Janssen mixes in his slider. This pitch was thrown about 9% of the time, featured a very high whiff rate of 41.6%. Surprisingly, the cutter was a very hittable pitch, yielding a .900+ OPS against (.399 wOBA) and a season low 12.7% whiff rate. Perhaps the cutter found a little too much of the plate (chart below), although throwing strikes is part of his game plan. 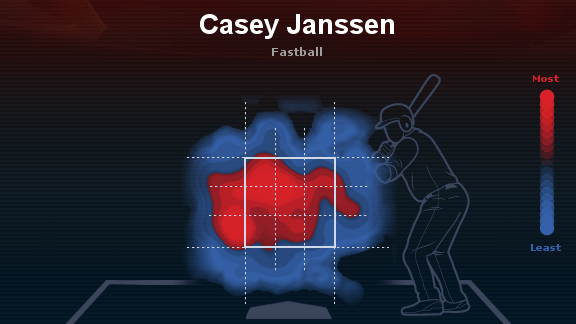 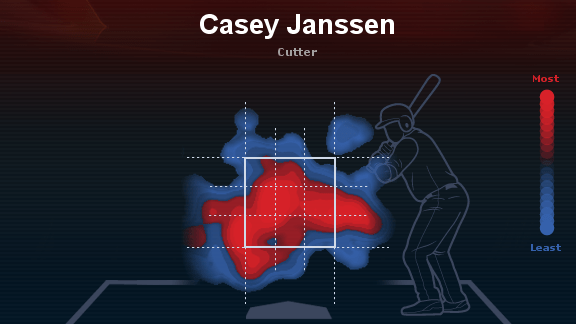 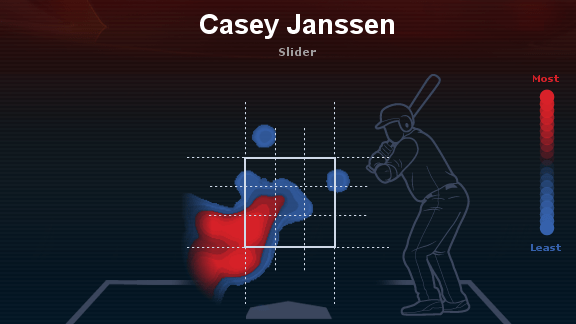 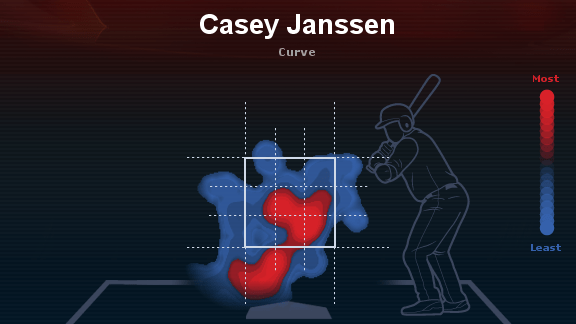 Here are some money quotes from a 2012 Fan Graphs interview with Janssen. This sheds some light on his approach:

DL (David Laurila): What is your most-important pitch?

CJ (Casey Janssen): Everybody has to say, or at least should say, their fastball. Obviously, my cutter is a little bit of an equalizer, especially against lefties. It gives me an opportunity to show them another look, with something hard, that will help keep them off my fastball.

DL: Outside of throwing strikes, how are you getting guys out?

CJ: That’s it. Throwing strikes is the name of the game. I pride myself, as much as I can, in not walking hitters. Eliminating base runners in that way is important. Limited walks has been a point of emphasis this year.

Janssen’s ground ball percentage (low 40%), and historical HR/FB rate (11%+) are less than optimal for the Sabermetric community. But when taking into account his mindset towards walks, and his high strand rate–three year rate over 80%–, the aforementioned GB & HR rates carry less weight. 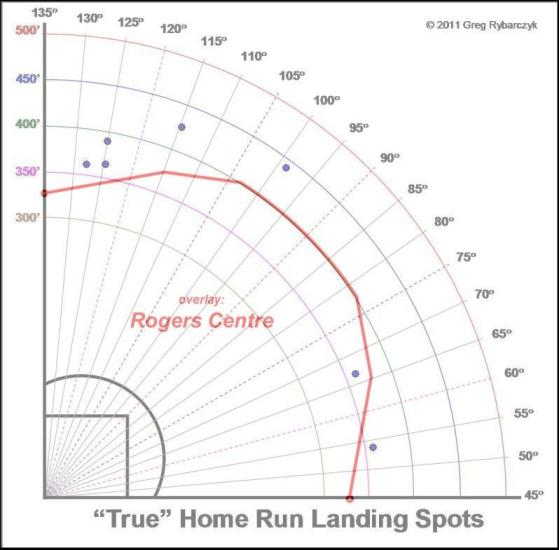 There are two inside the numbers statistics that highlight the sheer quality of Janssen’s stuff: 3 ball counts and middle location.

Within three ball counts, a count where hitters are either taking or expecting a strike, Janssen has the following rate stats: 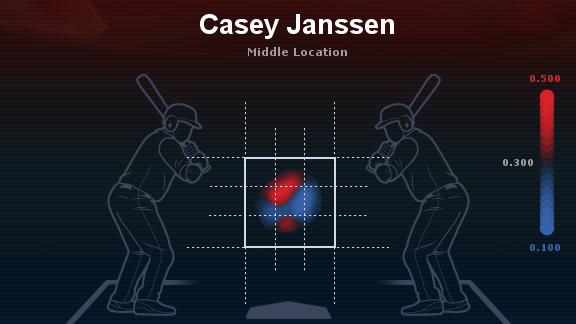 Putting everything together, Casey Janssen appears to be a pitcher with:

He’s not a prototypical closer with a sexy 97 MPH fastball or a wipe out slider; he’s somewhat unassuming on the mound; he works quickly, pounds his fastball and finishes out games. Minus a complete meltdown during the spring, Casey should be the Jays closer in 2013.

Note: The endorsement for Casey Janssen is that of the author (Matthias Koster) and does not neccesarily reflect the opinion of all Mopupduty.com writers.