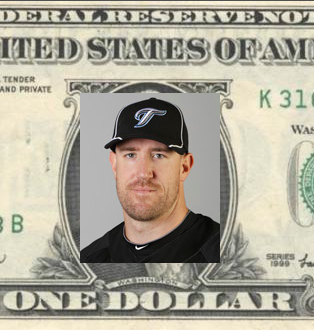 John Buck has been money this season with runners on base.

Every stat as is. Some include outs, situations, etc and some do not.

(bases runners on base while at-bat, the number that scored and then the percentage)

I’ll leave it up to you to count or disregard Wise. Bautista leads full-time players at 21%, Buck clocks in at #2.

(number of times up with runner on first, less than 2 outs, the number of GIDP and then the percentage)

Buck makes an appearance in the top #5. It’s nice to see Hill & Snider near the top. I included Vernon the list, although he is below the team average of 11%.

(advancing any runner with none out and/or knocking in a runner with two out, number of times, then percentage) 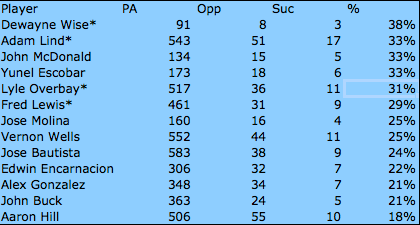 This time around Buck ranks near the bottom. Team average is 26%. On a related note the majority of the players in the top half (Wise, Yunel, McDonald, Molina) are slap style hitters, while the bottom half includes HR producers such as Wells, EE, Bautista, Buck, Gonzalez & Hill.

(none out with runner on second, number of times runner advanced, percentage) 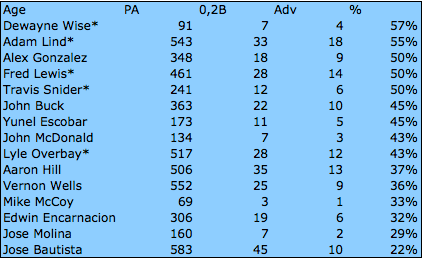 Small sample alert. Buck clocks in at #6, both Wells & Bautista are near the bottom. It’s nice to see front of the order hitters Lewis & Yunel at the top of the rankings, as this is another ‘slap hitter’ stat.

(PA with runner on third, less than 2 outs, number, percentage)

Another smaller sample in this category, many of the clubs big boppers are present in the top 6.