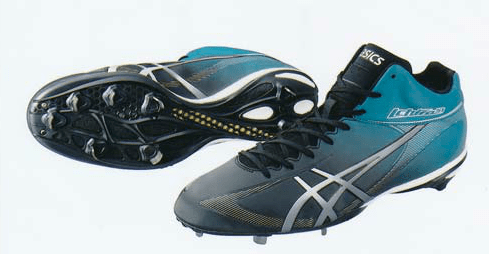 I’m sure that some will roll their eyes over this section.

Asics has created a new, lighter shoe for Ichiro. This shoe weighs in at 230 grams, dropping 20 grams in weight. Various studies have been released regarding weight distribution and running speed (along with more technical load data, Vo2 max, etc). Here is a study that looks at additional shoe weight (in this instance throughout the use of orthotics)

[blockquote align=”center” variation=”black” cite=”Med Sci Sports Exerc. 1985 Feb;17(1):158-63.” citeLink=”http://www.ncbi.nlm.nih.gov/pubmed/3982270″]Abstract: … The economy results revealed that the aerobic cost of running increased as the amount of mass added to the foot increased… It appears that if orthotics do, in fact, improve running economy by improving running mechanics, the amount of improvement is negated by the additional cost of running associated with the mass of the orthotics.[/blockquote]

It’s safe to assume that Ichiro is a fit & lean player, so a drop in shoe weight should have a positive effect on his speed. Or at minimum off-set a portion of the aging process. Running economy is typically saved for longer distances but there is a reason that high level track runners & marathoners search for the lightest possible shoe.

Will this turn Ichiro back into a speed demon? Baseball HQ has a very popular speed metric (spd) that measures a number of speed related outcomes and then translates it into a stat with a 100 baseline. Ichiro sat in the 160 – 170 range for the majority of his career but his speed stat score dropped to 156 in 2009, 134 in 2010 and [highlight1 variation=”red”]finally 124 in 2011.[/highlight1] Ichiro has offset this loss for fantasy owners by increasing his aggressiveness in SB opportunities and he still holds a respectable 85% success rate.

It’s a well known fact in Fantasy circles that Ichiro has been moved out of the leadoff slot and pushed back into the three hole. The team is trying to put a positive spin on the move but the writing has been on the wall due to the speed issue that we’ve already outlined, along with an OBP that has dropped from .383 in 2009 two years to a career low of .311 last season. Moving into the leadoff spot in Chone Figgins, as the M’s try to extract at least some value from Chone’s large albatross contract.

A mere 51 PA sample exists of Ichiro in the three hole at the MLB level, so we’ll scrap that idea. During Ichiro’s rookie season it seemed like was hitting a clutch double late in games on a weekly basis. For the 2001 season he hit an even .400 in late & close situations, creating a ‘mystic’ that helped him win the AL MVP award.

For that reason, along with the small sample, let’s look at a few Ichiro career splits.

I don’t really buy into the late & close argument to begin with. Thankfully, there doesn’t appear to be any drastic split differences between the above three situations. Note the BB/SO ratios fall into line once BB – IBB are taken into account. The conclusion in this instance is simple: Ichiro is consitent regardless of the situation.

While the stats fail to point to any changes in Ichiro’s game, his batting stance appears to be changing for the sole purpose of added power.

Ichiro turned heads by showing up to spring training with a new, wider batting stance. Here’s Isao Harimoto take. He is currently a commentator for TBS Japan and a member of the 500+ HR club in the NPB:

[blockquote align=”center” variation=”steelblue” cite=”Isao Harimoto” citeLink=”http://www.nikkansports.com/baseball/mlb/news/f-bb-tp2-20120226-909224.html”]New batting technique to a wide stance, with minimal depression of the right foot… changing the form in those years (38 years old) is a scary, only aiming for slugging.”[/blockquote]

The Seattle Times recently posted a short video clip of Ichiro in the cage. The wider stance is very noticeable.

What will this lead to? The wider stance, at least in my eyes, represents a shift in approach for Ichiro. Will this translate into more power at the cost of batting average, Ichiro’s fantasy bread & butter?

Trying to Sort out this Mess

On the surface it appears that Fantasy players should expect the following:

It depends on an teams needs. Ichiro has always come at a premium due to his BA boosting properties. This will be diminished in 2012 but could be offset by RBI gains. I’d drop Ichiro a few rounds or $$$ from conventional expectations. Don’t pay full price.