This past Victoria Day long weekend saw Matthias and I head down to Vegas for a bachelor party for one of our friends.  Kman came up with the genius idea to fly down to Phoenix one day early to check out an Arizona Diamondbacks game and then drive through the desert to get to Vegas the next day.  It also gave us another excuse to add to our cache of ballpark reviews with the addition of Chase Field. 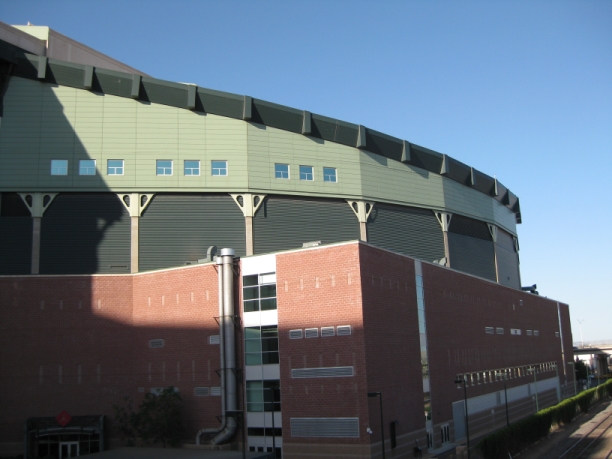 Chase Field is not much to look at from the outside, as you can see here.  It reminds me of various community centres/hockey arenas scattered around southern Ontario.  However, much like the amethyst, the drab exterior serves only to conceal the jewel that is inside.

The roof was closed when we arrived on account of the 35ºC temperature during the day in Phoenix.  The roof is markedly different than my home ballpark Rogers Centre.

There are eight roof sections, six of which telescope from the left and right sides toward the center. Each side of the roof can be operated separately, to shield the seating areas from the the sun, wherever it happens to be, while keeping the grass bathed in sunlight.

The atmosphere inside Chase Field is a little different than that of a closed Rogers Centre.  A little less sterile, it feels like a warehouse that has been converted for baseball purposes instead of a shopping mall.   Once the roof is opened, almost the entire park is bathed in sunlight.  Another neat little aspect is that large panels on the CF-wall-side of the ballpark open up like shutters to let in more light/breeze, thus making it feel even more like an outdoor event.

We arrived at the ballpark about an hour before gametime and took the opportunity to walk around.  As you can see from the first picture, Matthias was in full-on-tourist-mode with his camera dangling from his neck.  Chase Field employees took notice – everywhere we went we were warmly greeted “Welcome to Chase Field,” from concession workers to ushers to security guards.  It was a nice touch.

Unlike in Toronto where bars surround the Rogers Centre, there isn’t much of a party zone in the vicinity of Chase Field – except for “Sliders.” Sliders is a baseball themed bar right outside the front gates to the stadium that is indoors yet open air.  It is pretty big and was rockin’ by the time we got there. 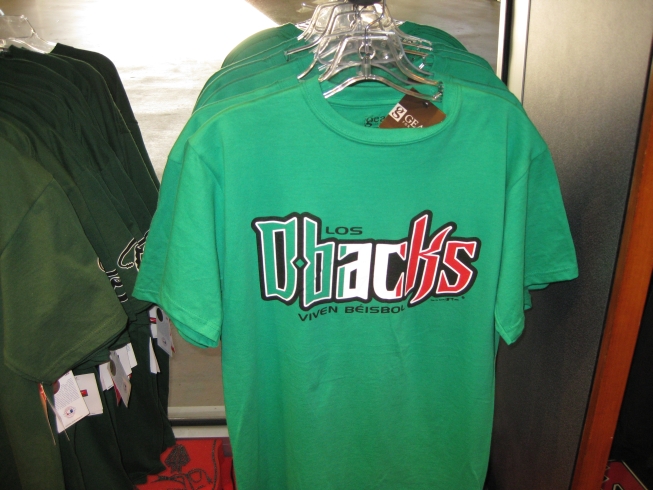 The team shops were typical, but I was impressed with the way they catered to the substantial Mexican community in Phoenix with Mexican-ized merchandise like the shirt pictured above.

The concourse features many different concessions to cater to all tastes.  Most impressive are the value items: $1.50 hot dogs and drinks. This is an idea that the Rogers Centre would be wise to adopt – it would shut up the family man who bitches daily that he can’t afford to bring his family to the ballpark.  The value items don’t stop there: draft beer can had for $4. 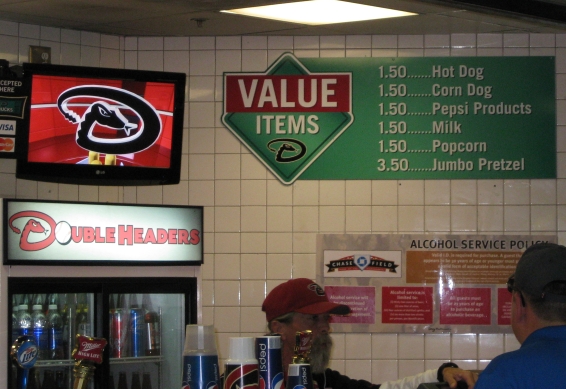 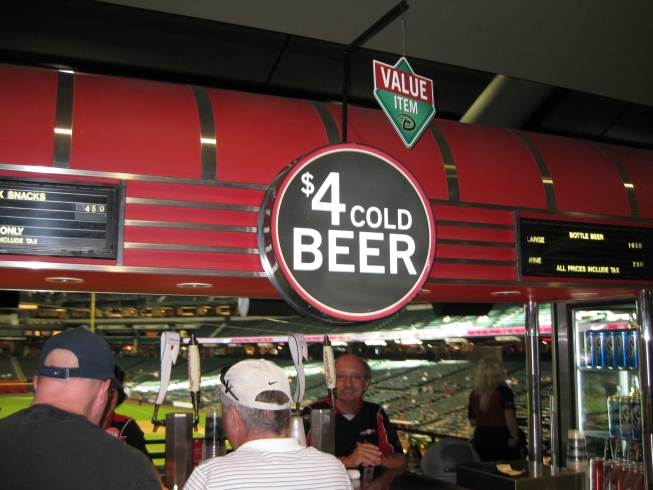 Moving along the concourse you will quickly notice the swimming pool beyond the CF/RF fence.  What a great idea for those hot Phoenix days.  It is going to cost  you though – $10,000 for you and your friends to book it for a game.

My favourite food – Mexican – is plentiful at the Chase.  Tamales (!), Burritos, Burros, Churros and Chorizo are everywhere.  What goes better with baseball, sunshine and mexican food than a margarita?  The folks at Chase Field do it up right with slushy machines filled with frozen margaritas. 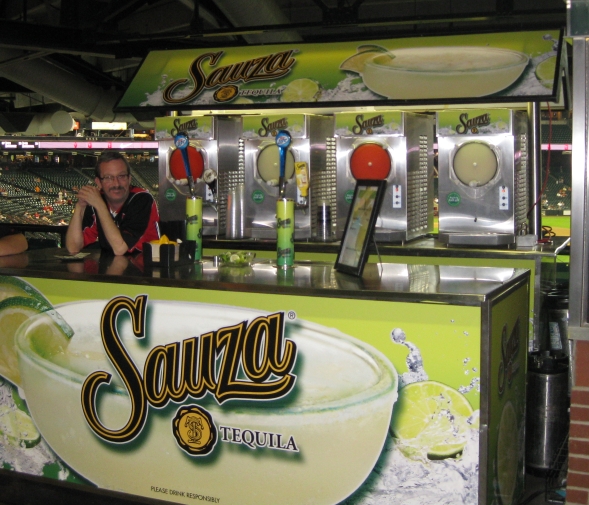 We should have the same thing in Toronto right? I know what you’re about to say… “oh no, that would never work in Toronto. Fans would get rowdy and out of hand!”  The D-Backs organization has that part figured out too. 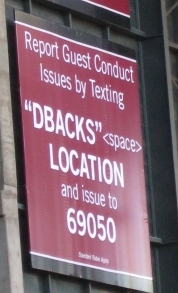 When drunken frat-trash from nearby Arizona State University embarass themselves and the entire fanbase of baseball while drinking their first margaritas in your section, help is only a text away.

The sign in the picture to my left is posted prominently around the ballpark.  All one needs to do is text the location where the party fouls are taking place and a D-Backs employee will be there in a flash to remedy the situation.

Now you don’t have to be that guy who causes a scene in front of your hot date, ruining her first baseball experience ever by you being the hero and engaging in a regrettable confrontation.

Chase Field looks definitely a pitcher’s park  however, it has graded out as being a hitter’s park over the years.  The corners on either side of center field are both marked at 413 feet.  The centre field wall is almost 20 feet high and shots that were sure home runs in any other park bounced off the wall or didn’t make it to the wall.  One nice  touch is the small “balcony” seating area which hangs over the corners on either side of the batter’s eye in dead center field, styled after a similar set up at the old Polo Grounds. 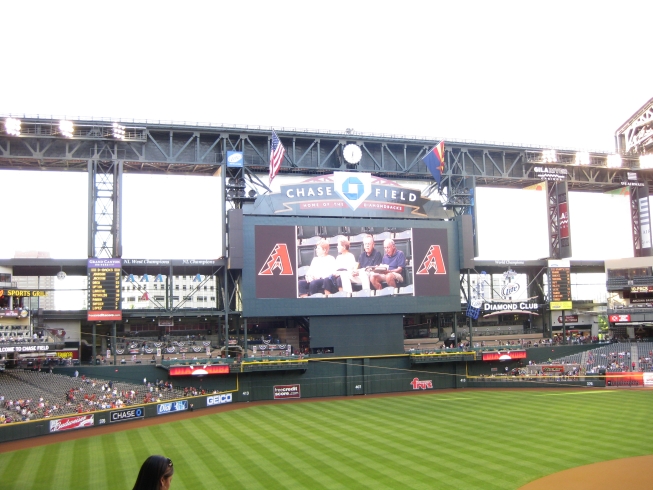 Speaking of nice touches, behind said balcony exists signage honouring both season ticket holders and employees who have been with the organization since its inception in 1998. Classy.

Kman, in another stroke of genius, picked up club level seats (which are similar to the HSBC seats at the Rogers Centre).  Club level ticket holders get access to a bar that overlooks the field, free parking, and a server to take food orders from your seat.  The sightlines are great too, but that is usually the case in a park built solely for baseball. All seats are directed towards the playing field.

At the end of the day, the Diamondbacks make it difficult for attendees not to become a fan of this team.  The total ballpark experience was flawless.  I can’t think of a better way to spend a warm breezy Phoenix night than at Chase Field and approximately 25,000 Phoenicians agreed with me.  I look forward to coming back for the Arizona Fall League.  Phoenix knows how to do baseball.

How does Chase Field rank among the ballparks we’ve reviewed? Have a look here. 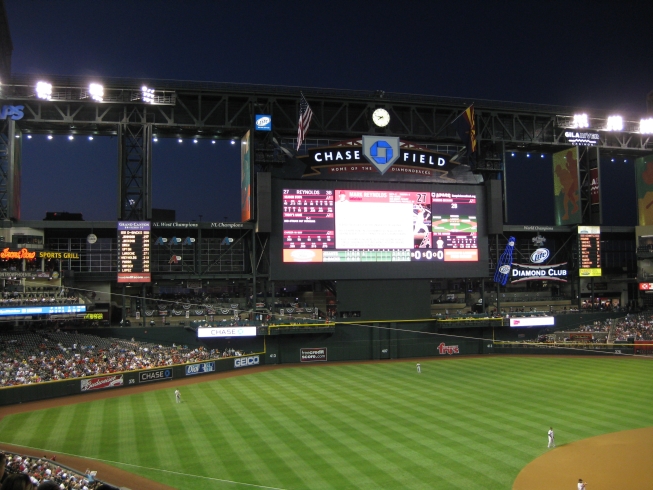 Here’s a little taste of the desert drive from Phoenix to Vegas: