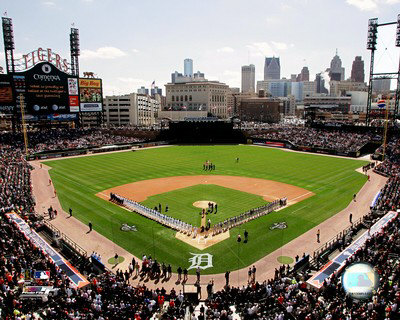 What could one be doing in Toronto on April 5, 2007 that they couldn’t be doing in Detroit, which is southerly to Toronto?  Why watching a Major League baseball game of course.

For all the naysayers who are critical of Skydome (Rogers Center) it would have been nice for Detroit to have a domed stadium for games two and three of the 2007 season.  For game two, fans had to endure three and a half hours of  – 3 C temperatures and howling winds of 40 km per hour while game three the game was thankfully postponed due to the 45 km per hour winds,  -3 C temperatures and snow accumulations.

For the first week in April why doesn’t Major League baseball open the season in the southern cities or in cities with domed stadiums?   This being Toronto’s only visit to Tigertown, means a make up game in September, three cities in three days and a missed off day for teams projected to be in the playoff races.

Despite the criticisms of Rogers Center being a concrete slab and an unpleasing place to watch a game it would have been warm.   That is my rant. 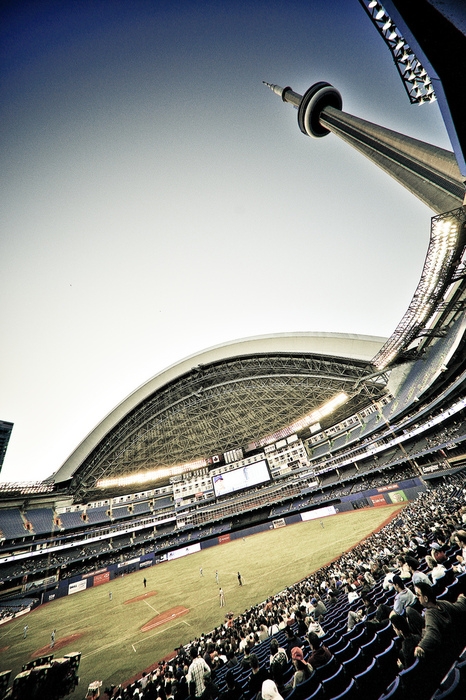 For all the ball I have enjoyed this was my first visit to another American League ballpark.  So what this is really going to be is a comparison of Comerica to Rogers Center.  Understanding that there might be a prejudice towards Skydome I felt that Skydome (it will always be Skydome to me) does not have to take a back seat to Comerica.  It has been stated before in Mop Up Duty that the game on the field is the most important thing for the true ball fan the other stuff is to keep the semi interested, girl friends, wives and children amused.

So transposing myself to a semi-interested fan since I can’t fit into the other categories no matter how hard I try, I find that Skydome offered much more for the casual attendee.

Positive aspects for Comerica included a friendly staff which was quite refreshing compared to the police state mentality displayed by Skydome ushers.    The seating arrangement was excellent.   All seats were directed towards the infield unlike Skydome where one has to twist to see the pitcher and batter.

The right field bleacher seats that are comparable to Skydome’s outfield level 100 seats are right on top of the bullpens and are much cheaper than the price of Skydome’s.  An excellent deal.

Because of its downtown location and the lack of traffic and pedestrians it was easy to drive to.  Lots of Parking in the area and you could find reasonable rates — $10 underground.

The eye appeal of Comerica was pleasing but it was not a “Holy Smokes” WOW look at this place.  A nice functional ballpark.

However for the casual fan Skydome has it all over Comerica.  First it would have been indoors and comfortable.  Nothing better to turn a casual fan into a non-fan by sitting in football type weather.

The whole Scoreboard experience at Skydome is vastly superior to that of Comerica.  The replay board was small and not all that clear.  The between inning presentations were inconsequential and uninteresting.  Comerica had a competition of what song would be heard in the fifth inning based on fan noise response held in the third.

Imagine cheering in the third inning to see if you wanted to hear ABC by the Jackson 5, Stop in the Name of Love by the Supremes or I heard it through the Grapevine by Marvin Gaye in the fifth inning.  If there was any cheering for the eventual winner ABC we didn’t hear it.

Compare this to the Skydome’s airplane race competition; between the first second and fifth levels, Skydome’s noise level put Comerica to shame.

Comerica never announced their attendance.  Skydome makes a game out of it and then thanks you for your support.

The seventh inning stretch was traditional.  Here’s the song here’s the tape stand up and stretch.  At Blue Jay games they have combined the cute but of date OK Blue Jays and the 7th Inning Stretchers to along with Take Me Out to the Ball Game.

Comerica ground staff came out in a half hearted mid game fix up of the diamond.   Compare this to what Blue Jays present as the world fastest ground crew and you have an entertaining between inning event.

Other pluses at Skydome include television monitors throughout the concourse levels, no line up, clean washrooms and yes better ballpark food.  Comerica’s small sausage dogs were so small you need to buy two, Tiny Tim’s mini donuts the kind that are made while you watch that sold 6 for $4 and pizza’s with slimy mushrooms that came from a tin.

As I stated for the true fan the game is the thing.   The other stuff other than maybe the out of town scoreboard are to keep the casual fan entertained.   Although this may come across that I am trying to put down Comerica I did enjoy myself but I am trying to get across to the locals is that Rogers Center does not have to take a back seat this one of the “New cookie cutter retro” ball parks. 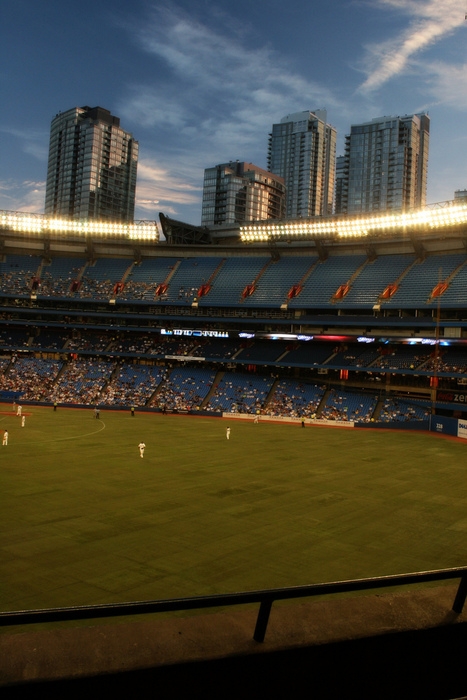