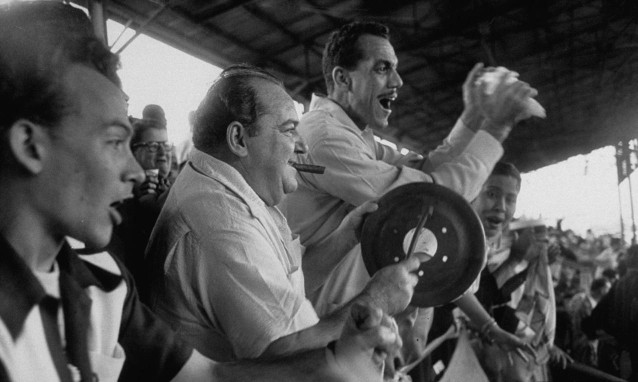 I hope they bring their passports!

This past winter’s most talked about Cuban free agents are all heading to Arizona at the same time.  Adeiny Hechavarria, Jose Iglesias, Jose Julio Ruiz and Leslie Anderson will all be taking part in this year’s Arizona Fall League beginning Tuesday, October 12th.

Toronto fans should have a keen interest in the AFL goings-on since the Blue Jays were in talks with both Hechavarria (who they successfully signed to a 4-year/$10 million contract), Jose Ruiz and flamethrower Aroldis Chapman.  The Blue Jays bowed out of negotiations with both Ruiz and Chapman and both players went on to sign elsewhere.  Were they asking for too much or will Jays’ GM Alex Anthopoulos regret passing up on a golden opportunity?  We’re now at the stage where we can begin to find out.  Divisional rival  Tampa Bay scooped up both Cuban first basemen Jose Ruiz (signing him to a minor league deal) and Leslie Anderson (4-years/$3.75 million) while Chapman signed a highly publicized 5 year/$30 million deal with the Cincinnati Reds.  Jose Iglesias was the first of the group to sign, inking a 4 year/$8.2 million deal in the summer of last year.  Iglesias is often compared to Hechavarria, his former teammate on the Cuban National Team.  It is thought that Iglesias has the better bat while Hechavarria is better with the glove, though Hechavarria has considerably more upside.  Who will be the cream of the Cuban defector crop?  The AFL will give these players a chance to play against the best prospects in the minors (for the most part… Cale Iorg, what are you doing here?!) and us fans the ability to see what scouts valued in them.

Let’s do a run down of what each has done so far this season:

Hechavarria struggled with the bat early on in high-A Dunedin before being promoted in late June.  Despite his struggles, it was thought that Hechavarria would benefit from the New Hampshire coaching staff – namely manager and former major league shorstop Luis Rivera.  Adeiny played much better in the following months thanks to his refined approach at the plate: taking pitches, learning the strike zone better and having a consistent swing.  He became more selective and stopped chasing breaking balls out of the zone.  The spanish-speaking Rivera has also taken on the role of a life-coach of sorts, helping to acclimatize Hechavarria to his new surroundings and culture.

“People say (Hechavarria) is like a cat (but) he’s like a wildcat. Those feet are quick,” Rivera says. “As soon as you see him take ground balls, you know right away he has the talent to be a great defensive player.”

Adeiny Hechavarria is slick at shortstop, but there’s a lot of style there relative to the amount of substance, and he muffed a routine groundball in the laziest of ways — he failed to come in, setting his feet and waiting for it to reach him, and an unexpected hop put the ball in his gut instead of in his glove. At the plate, he’s got a long swing with a big finish and showed poor pitch recognition, but he deserves some extra slack there as a first-year player in the U.S. who’s already in Double-A and is listed at 21. I see above-average run, throw and probably field tools, but the bat is a work in progress.

Iglesias had a bit of a headstart on his Cuban comrades as he made his debut in the AFL last season.  In his second stint this year, Iglesias will be reunited with his former teammate Adeiny Hechavarria on the Peoria Javelinas.  On the Cuban National Team, Iglesias moved to second base to make way for Hechavarria at shortstop.  It will be interesting to see what the situation will be in Peoria.

Although both are 5’11”, they are built quite differently.  While Hechavarria is sleek and wiry, Iglesias is built like a football player – solid, stocky and explosive.  Iglesias played well in his first 40 games, hitting for a .306 average and an OPS near .800 before an errant pitch broke his right hand.  He struggled in his return so he will be looking to put that hand injury behind him and finish strong in the AFL this fall.

Here’s a story on Iglesias by NESN reporter Heidi Watney:

One interesting tidbit of information: Canadian hero Stubby Clapp will be the team’s hitting coach.

After starting off slow in the pitching-heavy Florida State League, Anderson got his bearings and excelled in moving up 2 levels on the season.  When we profiled Anderson earlier this summer, we wrote:

The former Cuban national team standout has gap power similar to Lyle Overbay (when he was playing well) and is projected to hit 15-20HR at the major league level.  Like Overbay, Anderson is a patient hitter who takes many pitches.  In his Cuban National Series career, Anderson drew 417 walks compared to 376 strikeouts.  Unlike Overbay, Anderson can handle left-handed pitchers just as well as righties.  In his final Cuban season, he hit .379 against lefties and .382 against righties.  He sprays the ball to all fields

It seems we were spot on, though Anderson has had a little tougher time with left-handed pitchers (.276) than righties (.344).

Instead of making Anderson a September call-up, the Tampa Bay Rays have opted to leave him in Durham in the heat of a playoff run.  The Bulls are currently in the International League finals vs. Columbus and Leslie Anderson has hit at a .375 clip in the playoffs thus far.

It is nice for the Rays to have a player like Anderson in their back pocket should Carlos Peña leave the big club via free agency this offseason.

Jose Julio Ruiz had a late start compared to the rest of the group.  His signing with a major league club was delayed until June after reports stating that his open tryouts were disastrous.  The Tampa Bay Rays signed him to a minor league deal that pays him $20K per month and the team has the option of picking up a 4-year/$4 million option by November 15th.  Depending on how this turns out, Ruiz could be a steal.   Because of his physical build and plate discipline, many scouts have used David Ortiz as a projectable comparison.  Ruiz was originally asking for $10 million once he was made available on the open market. 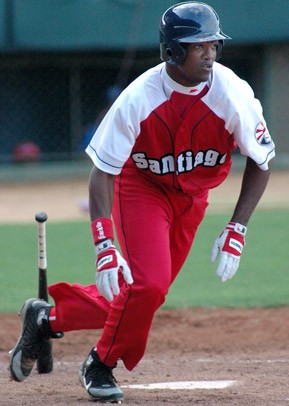 Once he signed and was cleared to play, the Rays assigned Ruiz to the low-level Dominican Summer League to get his feet wet. Once there, he straight-up mashed to the tune of a 1.229 OPS in 13 games. The Rays moved him up to the Montgomery Biscuits – a AA affiliate – on August 13th. Depending on how you look at it, that’s a 3-4 level jump. He’s played well in Montgomery but hasn’t done anything special, other than show patience at the plate.  The AFL will be a good litmus test for Ruiz and a chance for him to redeem his tarnished reputation.  Scouts initially liked Ruiz’ bat over Leslie Anderson’s; it is thought his power potential is much greater.  It will be fun to watch them go head to head to see who really is the better player.