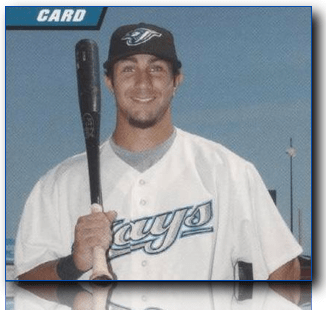 The Toronto Blue Jays #1 Speed Threat, AA Prospect Darin Mastroianni stole 70 bases last season. This year he’s on pace to steal over 75. Who is this guy?

Born in North Carolina, Darin Mastroianni played his high school baseball in New York State, where as a senior he earned 2003 TPX Louisville Slugger All-American honours as a middle infielder.

Darin went onto college at Wintrop in Division I. He redshirted in 2004. According to statistics, Darin barely touched the field for Wintrop in 2005. He eventually transferred to Southern Indiana, a Division II school for the beginning of the 2006 season.

Chicago area scout Steve Miller, the only Jays scout to watch Mastroianni play, recommended Darin to the Jays higher ups as a CF prospect, not as a secondbasemen. The Jays eventually drafted Mastroianni in the 16th round of the 2007 draft.

Darin was signed and placed in rookie-level immediately following the 2007 draft. Playing 68 games (primarily at secondbase), the slash and dash hitter put up an .800 OPS and stole 20 bases.

At the beginning of the 2008 season Darin moved to Low-A Lansing. He also moved full-time to the outfield, playing CF. Mastroianni struggled at the plate, hitting only .228 in 95 games and also battled an elbow injury (which he would have off-season surgery to repair). Regardless, he showed off his speed, stealing 30 bases in 31 attempts.

“There’s an adjustment anytime you jump a level,” he said. “I’m seeing the ball well and just getting used to the new pitchers. It’s going to take some time. I feel good at the plate.”

Promoted to High-A Dunedin for the start of 2009, Darin had his breakout season. In 61 games in the FSL (Florida State League), he hit .325, walked 37 times vs 38 strikeouts and stole 32 bases in 39 attempts. These stats earned him a mid-season spot at the FSL All-Star game. Here’s a video of Mastroianni (#7) clowning around and doing the YMCA between innings at the All-Star Game:

Shortly after this game Darin was called up to AA New Hampshire. His stats dipped, with his overall OPS falling to .712. Still, he brought his main attribute, his speed game, and stole 38 bases in only 70 games. On the season Darin stole 70 bases between the two levels.

Defensively Mastroianni made strides, scoring out as an average CF according to R/150 zone stats. He also threw out an impressive 15 runners between Dunedin (6) and New Hampshire (9).

Flying under the radar (and never mentioned in Jays top 10 prospect rankings), Mastroianni has continued to impress and surpass expectations in the 2010 season. He was recently named the Eastern League (AA) player if the week on May 10th. For the season he’s hitting .304 with a .394 OBP, 22 BB vs 23 K and 18 of 19 in stolen base attempts.

With the stolen base coming back into style and reading a little too much into this MLB.com chat

Question: titou51: Alex, what is your take on the importance of speed on the basepaths?

Anthopoulos: I think speed is important because it plays in any ballpark. There is no question we would like to add some speed to this team but we need to make sure that we add the right players that bring that element to their game.

Mastroianni could have a future with the Jays as a 4th outfielder or perhaps as speed threat platoon player. We’ve all seen the added dimension AL East players such as Crawford, Ellsbury and Gardner bring to their respective clubs. It’s nice to know that the Jays have their own speed demon plying his trade in the minors.