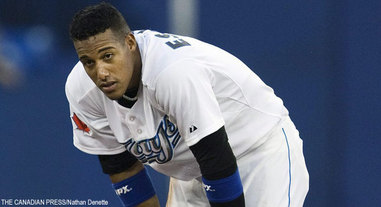 To be honest, I came across a projection for Alex Rios. And when I think about Alex I think about double plays. How does the current Toronto Blue Jays offensive roster stack up in terms of DP?

The folks over at Baseball Prospectus have a great free statistical section, which includes amongst others, a double play percentage stat.

Here’s how it works. They take a player’s total number of opportunities in double play situations and create a percentage. i.e. if a player hits into 20 DP in 100 opportunities, he’ll have a 20% DP rate.

They also have a great stat, NET DP. Here is their explanation:

While a few different theories exist on how to calculate the exact negative run value of a DP, a common rate is 4 times greater than a strikeout.

The following lists include seasonal statistics from Toronto Blue Jays during the 2008 – 2010 seasons.

Vernon Wells makes three appearances on the list, although to be fair his NETDP score is higher due to opportunities more so than an extremely high DP%. But now that I think about it, his 2010 rate of 15.8% isn’t anything to write home about.

Aaron Hill appears three times. I’m surprised that his lackluster 2010 didn’t include a higher NETDP score. Part of his low rate could be attributed to strikeouts, although I’d rather have a K than a DP every time.

Adam Lind may be in the same boat. His horrid 2010 score a low NETDP but he enjoyed the K.

Travis Snider sneaks into the bottom 12 for his 2010 season. Travis also posted a negative score in 2009.

Is it the K crowd?

I’m sure K does play a factor in the NETDP rate. Still, I’d rather see a K than a DP.

I won’t like it but I can live with Vernon’s higher NETDP scores if he produces at 2010 levels.

However, I am worried about a full season of Yunel in the two hole.  But if a silver lining exists, it would be Rajai’s steal tendency. Taking Yunel’s historical performance into account, I’d send Rajai all day if he’s on first and Yunel’s at the plate.