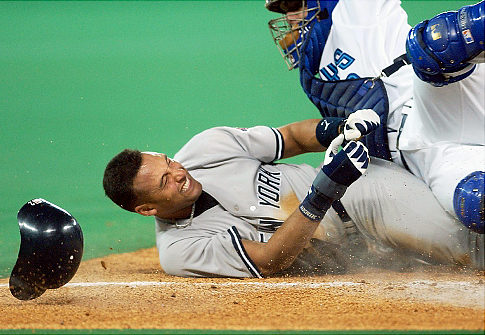 With all this talk about Derek Jeter signing a contract extension with the Yankees and how his value can’t be “overstated,” I can’t help but remember when Jeter’s teflon persona became tarnished in my eyes.

I remember the day like it was yesterday.  It was the Jays’ home opener of 2003 and I was sitting right on the 3rd base line in the 100 level.  I had always respected Jeter as a ballplayer but then I witnessed a play that led me to believe otherwise.

The date was March 31, 2003 and the game was set to be a pitcher’s duel.  Roger Clemens for the visiting Yankees, Roy Halladay for the Blue Jays.  It was the top of the 3rd inning with the Yankees ahead 1-0.  Derek Jeter worked a 1-out walk to bring up left-handed slugger Jason Giambi.  To counter Giambi’s extreme pull-hitting bias, the Jays employed a defensive shift.  The third baseman moved to the shortstop position, leaving thirdbase uncovered.  Giambi hit a comebacker to the pitcher Halladay, who fielded it cleanly and flipped it to Carlos Delgado at first base.  Jeter advanced to second, and being the “heads up player” that he is, saw that Toronto’s third baseman was out of position .  He rounded second and headed for third, expecting an easy extra base.

Toronto’s journeyman catcher, Ken Huckaby, the original “Hustle & Heart” Jay, saw Jeter do this once before (a year earlier).  This time he was ready.  Huckaby hustled up the 3rd base line (as he should have) and fielded Delgado’s throw from across the diamond.  Jeter chose to slide headfirst into the bag instead of feet first at the exact same time that Huckaby arrived at the bag.  Jeter slid directly into Huckaby’s shin-guard and dislocated his shoulder.  He was called out on the play. 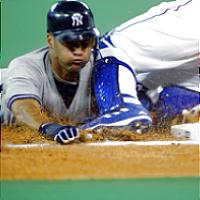 I remember hearing Jeter’s screams of pain while watching him writhe around on the ground clutching his arm. From the vantage point of my seats only a few rows from the field, this seemed to me like a pretty serious injury coupled with a bruised ego. 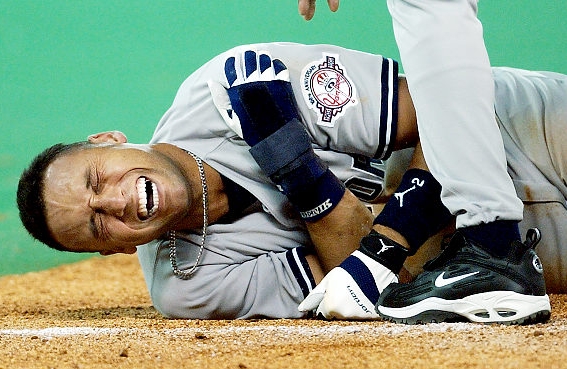 Jeter was helped off the field grimacing and whining and all the Toronto fans gave him a polite round of applause as he left the game.  Ken Huckaby was shown on the jumbotron with a towel in his mouth, obviously concerned with the well-being of Jeter.

I didn’t think much more of that incident until I read more about it in the paper in the following days.  Apparently Huckaby was being vilified in New York, being called a “dirty player” and the play was labelled a “cheap shot” by the New York media.  Then-Blue Jays GM JP Ricciardi said to Toronto Sun reporter Bob Elliott: “They probably have signs of Osama bin Laden, Saddam Hussein and Ken Huckaby up in New York right now.  He shouldn’t apologize for playing hard.” 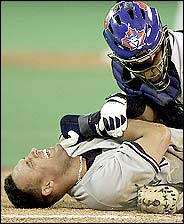 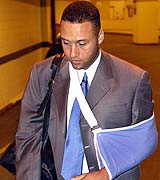 When asked himself if the thought the play was dirty, Jeter responded: “You’ll have to talk to him.”

Huckaby was also asked to explain himself, repeatedly.  This is what he had to say:

“Right when he hit second I took off,” Huckaby said. ”I was running, running. If Carlos hadn’t thrown the ball, I would have stopped. I wasn’t trying to block the base. I was trying to stop the ball from going into left field.   “I was just trying to catch the ball on the run,” Huckaby pointed out. “I’m not small and I’m not fast.  It wasn’t like I took two steps and went into him. I caught the ball, landed on him in one motion.  My momentum carried me through the base. He just happened to be there at the same time.”

“I was hoping they didn’t think it was a cheap shot,” Huckaby explained. “I felt horrible for what happened.  But it wasn’t a cheap shot at all. It was just one of those fluke plays.”

“How many times do you see a catcher covering third base? It never happens.”

”I spent 12 years in the minors,” Huckaby said. ”I have to do the little things to maintain my position up here. I have to cover. That’s just the way it is.”

The journeyman who does not attempt to make that play may as well book his ticket back to the bush leagues or, more to the point, home.

Regardless, Huckaby went one step further.  He obtained Jeter’s cellphone from a teammate and called to express his remorse for the outcome of the play.  He left a message on Jeter’s voicemail.

”I’ll go over to him if I see him,”  said Huckaby during batting practice the following day.  ”I’d like to talk to him, if he’ll talk to me.”

After the game, [Jeter] said he didn’t know what Huckaby was talking about. He had received no message. ”He doesn’t have my number,” Jeter said, curtly.

A Toronto radio broadcaster brokered a meeting between Huckaby and Jeter.  Before the final game of the series,  Huckaby approached Jeter in the Yankee clubhouse.  Huckaby said his piece and went to shake Jeter’s hand.

Huckaby says the words were heartfelt. The guy genuinely felt bad, and the fact that the play sidelined Jeter for so long made it worse.

“He stonefaced me,” Huckaby says. “He just stared at me.

Huckaby finished, and then there wasn’t much to do except turn around and leave. Before the frostbite got him.

“I was upset at how unreceptive he was,” Huckaby says.

I could understand Jeter’s reaction had this been a dirty play.  But was it really?  Not even Jeter’s hometown New York Times thinks so:

On this unusual play, this freak occurrence, Huckaby was only guilty of being clumsy. Jeter might have been more gracious. In all sports, lesser players and teams, non-Yankees, are typically treated like the extras in an ensemble cast. That doesn’t mean they don’t have the right to compete.

For the classless way that you conducted yourself, Derek Jeter, you are a douche. 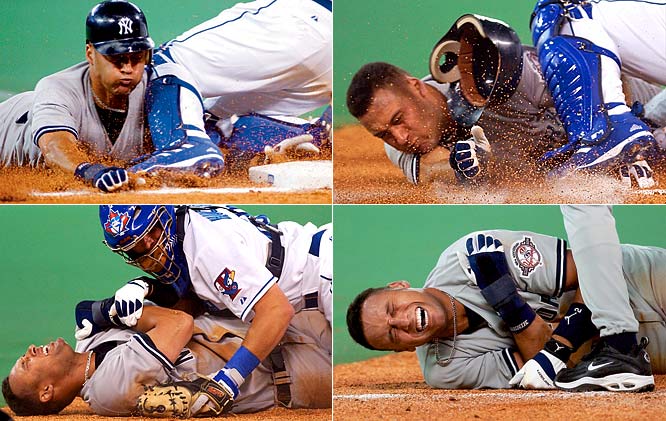