Readily apparent to everyone that watched the Jays home opener last night: Dickey & Arencibia had a rough first date.

Scott Johnson, writing for Drunk Jays Fans, posted a great summary of the evening via 10 animated .gifs. (view all 10 here in a new window). Below are two of the gifs, blatantly stolen from the Drunks:

The issue wasn’t limited to just passed balls and dropped pitches; an additional point of concern is the number of flubs, and overall poor framing. Here’s a look at the called strikes from last night: 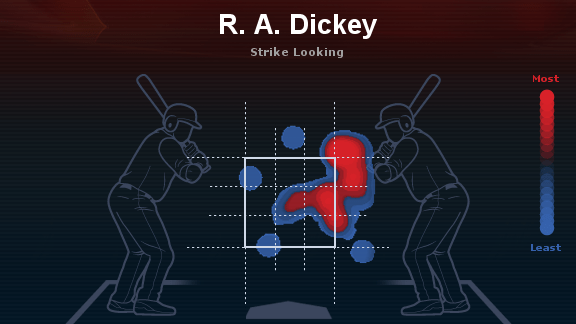 and the called balls, including a number of lower in the zone pitches that JP had a hard time catching, let alone framing: 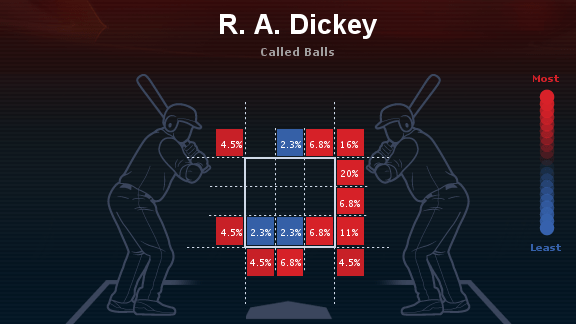 Note: 2.3% = 1 called strike. Dickey lost 4 in the zone called strikes, along with a number of borderline pitches.

Many took to twitter to either complain (passed balls) or defend (first game of season) JP.

I’m not ready to throw the baby out with the bath water so-to-speak but one thing is clear: meaningful regular season games are not the place to learn to handle the knuckleball.

If JP is going to catch R.A. going forward he needs a number of side sessions. The Jays should also consider bringing in an in dependent league or even a retired knuckleballer to throw to JP, just to get him used to catching the pitch.

Considering Dickey throws the majority of his fastballs to pitchers, I was interested to see how he’d use the pitch last night. He threw the pitch six times, and it was very effective. In total he collected:

Not the greatest first outing for Dickey & company. On the plus side the Jays still have 161 games to play.